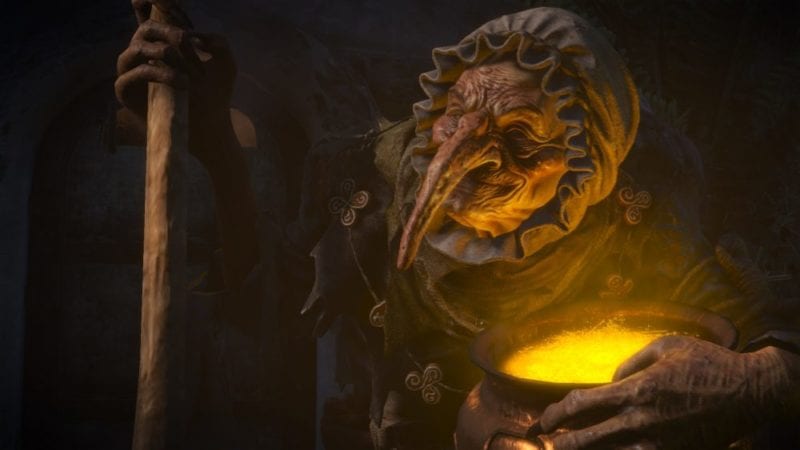 When you finally enter “The Land of a Thousand Fables” during the quest “The Night of Long Fangs,” you’ll find yourself in a new quest, “Beyond Hill and Dale…” This particular quest is full of color, magic, and nasty beasts. One of the first beasts you’ll face is a hag intent on making you her supper! Here’s how to beat the Wicked Witch in The Witcher 3 Blood & Wine if you’re struggling.

She is one of the more interesting fights in Blood and Wine, as she presents herself as a much harder challenge than she actually is. While most fights require a bit of heavy preparation beforehand, for the Wicked Witch you need only remember to bring a crossbow and a Silver Sword. That’s pretty much it.

When it comes to the Wicked Witch’s attacks, there are only a few you should keep an eye out for. She’ll summon a beast in the beginning and middle of the fight. You’ll end up facing one of the large, poison flower monsters, and a couple of panthers. Both are relatively easy opponents, just make sure to constantly dodge as she’ll still try to go on the offensive while you’re occupied. Her direct attacks consist of firing poison at you, and a rush in a straight line.

Taking her down is just a matter of timing. While fighting the Wicked Witch you may have noticed that she’s surrounded by a magic bubble. This bubble is completely impervious. No sword, bomb, bolt, or sign can cut through it, making the fight frustrating at first.

The key is to wait for this boss to dive and rush straight for you. It’s at this moment that she takes off her bubble in order to attack you. Quick-fire with your crossbow and she will crash to the ground, leaving her open to your attack for a few seconds. Her broom will also join in on the fight. You can take it out if you want to, which will greatly shorten the fight, but there’s no real need. It’s possible to clear over a third of her health in one go, so if you don’t mind waiting on her to dash, the Wicked Witch fight can still be done pretty quickly

If you do want the fight to go a lot faster, you can use Relict Oil to increase your damage against this boss by a substantial amount. Either way, there isn’t too much of a fight put up here once you figure out that you just need to fire as she charges you.

For added protection, keep Quen active throughout the fight, because even while going down she can still damage you. It’s not enough to kill you outright, but if you’ve been struggling to figure out her pattern for some time, the Wicked Witch can chip away at your life with ease.

That does it for everything you need to know to beat the Wicked Witch in The Witcher 3 Blood & Wine. For more guides on the game, search our dedicated wiki. It includes other boss battles, as well as puzzle walkthroughs such as the challenging portal puzzle.