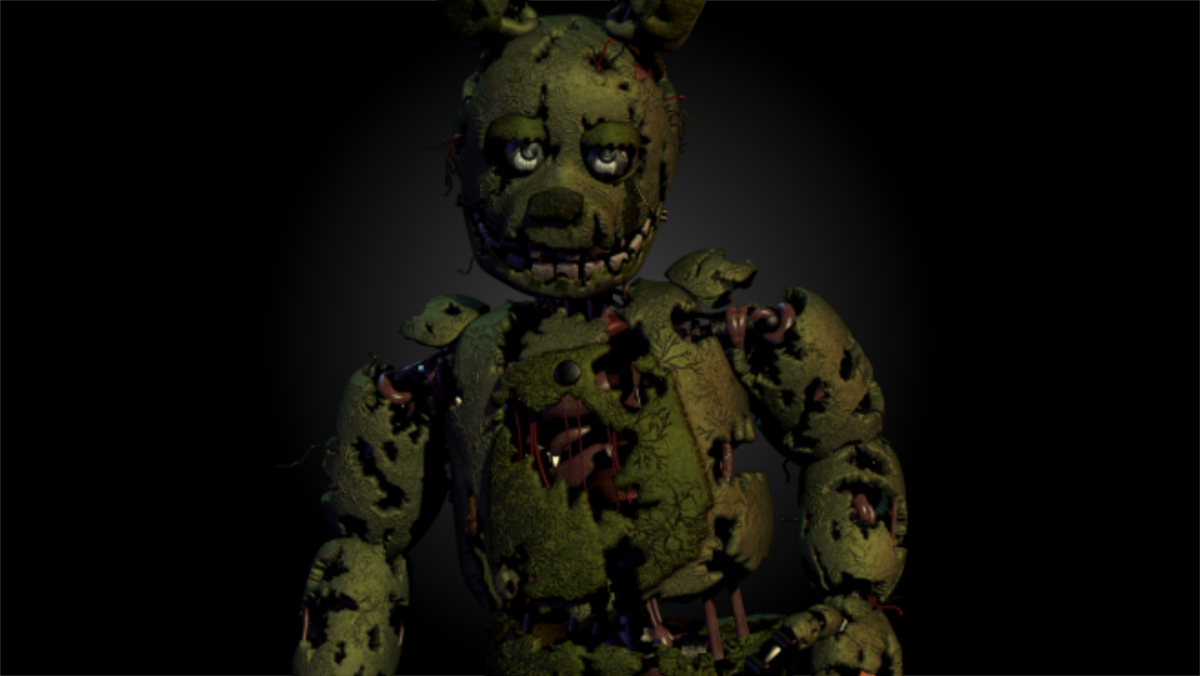 Five Nights at Freddy’s 3 switches things up from the familiar Pizzeria, taking place in a Horror attraction named Fazbear’s Fright that is built from scraps of Freddy Fazbear’s Pizzera. Taking a darker, grittier tone, you’ll encounter creepy Phantom animatronics and puppets. Grab your security badge and get ready for your night shift; here’s all Five Nights at Freddy’s 3 characters you’ll encounter in the game.

Springtrap is the main animatronic of the game and the primary attraction of Fazbear’s Fright. Springtrap is a bunny-like animatronic with damp and moldy fur. On top of this, his skin is torn, suffering heavy damage, and he has loose metal, wires, and his exoskeleton exposed in many areas. Springtrap is also the only character able to trigger a game over, as the others simply jump-scare you, so be careful if you see the creepy guy.

Phantom Freddy is a damaged and burnt hallucination of Freddy Fazbear from the original Freddy Fazbear’s Pizzeria. Phantom Freddy still carries his signature microphone and wears his hat and bowtie but has a much more decayed and withered appearance. I’m not sure about you, but I definitely wouldn’t want to catch a glimpse of his sunken-in black sclera and soulless white pupils.

Phantom Chica is the hallucination of the original Chica from Freddy Fazbear’s Pizzeria. Phantom Chica is burnt and heavily damaged, missing her entire left arm and leaving the poor bird to wander around with haunting blacked-out eyes and a complete view of her monstrous teeth, thanks to her open mouth. Interestingly, Phantom Chica appears to take the form of the Chica from FNAF 1, while the other Phantom beings resemble their FNAF 2 counterparts.

Phantom Foxy is the hallucination of the original Foxy from Freddy Fazbear’s Pizzeria. Phantom Foxy is missing his right arm, with most of his body missing his fur and withered down to his metal skeleton. Phantom Foxy’s singular hollowed-out eye and haunting white pupil are pretty unsettling, accompanied by his large, monstrous fangs, making him look like something out of a nightmare.

Phantom Balloon Boy, otherwise referred to as Phantom BB, is the hallucination of the original Balloon Boy animatronic of Freddy Fazbear’s Pizzeria. Phantom Balloon Boy is much more spooky than his FNAF 2 counterpart, being burnt and damaged beyond relief. Plus, he’s missing his little balloon and sign, only leaving his disturbing gaze and creepy smile. Watch out for Phantom BB in FNAF 3, as he can disable your Ventilation system if he catches you with a jumpscare.

Phantom Marionette, also known as Phantom Puppet, is the hallucination of the Marionette/Puppet from Freddy Fazbear’s Pizzeria. Phantom Marionette has a shadow-like black body, with most of its white face burnt away. You can see a slight hint of its once rosy-red cheeks there, but Phantom Marionette looks empty and soulless apart from that. Phantom Marionette can also be quite a nuisance, blocking you from being able to check the Maintenance Panel or Monitor, so be prepared to quickly change Cams if you see it to avoid this from happening.

Phantom Mangle is the hallucination form of Mangle from Freddy Fazbear’s Pizzeria in FNAF 2. Phantom Mangle is badly burnt and destroyed, but you can still make out an unsettling long jaw with sharp, pointed teeth and haunting white pupils within the abyssal black sclera. Phantom Mangle also has loose wires in several locations, with most of its body being withered down and twisted into its metal skeleton.