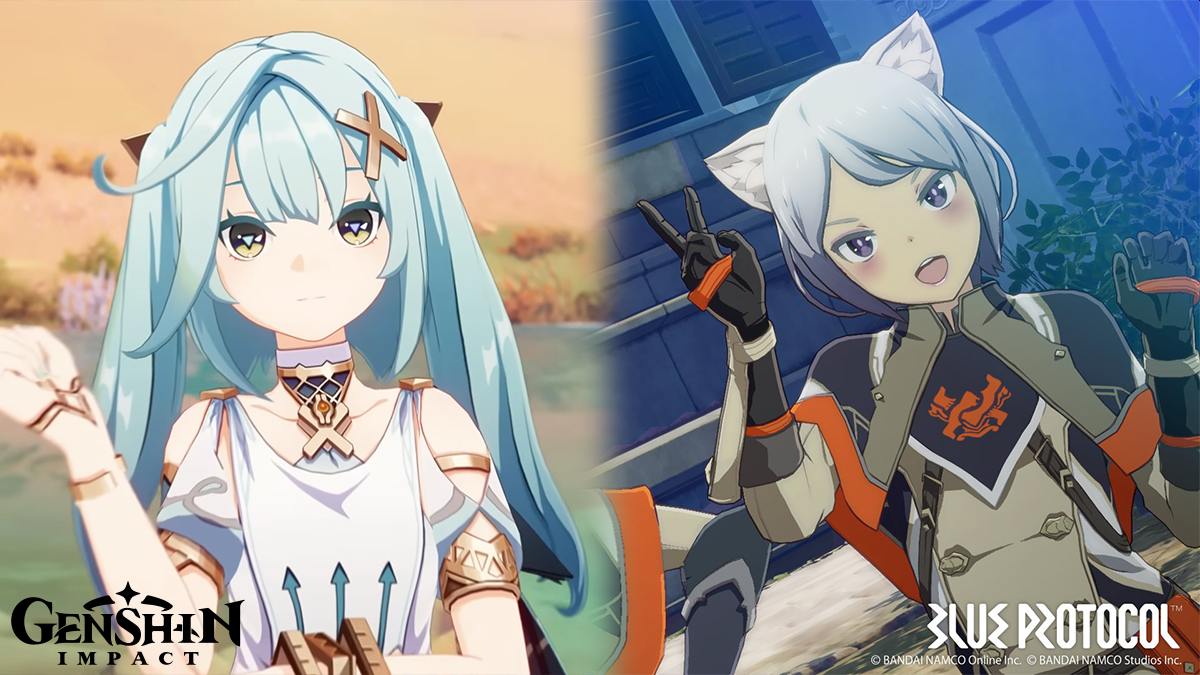 Considering Blue Protocol’s visuals and the fact that it’s an online game, many might expect it to be similar to Genshin Impact. This is a natural mistake considering Genshin’s popularity, as it’s easy to compare a game that isn’t yet fully detailed to the one you know well.

The most obvious difference between the two games is the business model. While Genshin Impact has the occasional paid cosmetic, HoYoverse mostly makes money via the game’s gacha.

The business model mentioned by Bandai Namco for Blue Protocol is based on cosmetic purchases that don’t affect gameplay, and season passes, which means you won’t have to pray for the blessings of the RNG to get what you want.

Genshin Impact has predetermined protagonists, the male Aether, and the female Lumine, but you can also play as other characters initially introduced as NPCs by unlocking them via gacha. There is no character creation or customization.

On the other hand, Blue Protocol is much more similar to a classic MMORPG, letting you fully customize your character from the ground up. It also has a very deep character customization suite designed to let you design your favorite anime-style hero or heroine pretty much however you want.

At least for now, it appears that you play as your own character all the time, and NPCs cannot be controlled, while in some cases they may help you under the AI’s control.

In Genshin Impact, the way your characters fight depends strictly on which character you’re using at any given time.

In Blue Protocol, you can pick a class for your character among those available in the game including Aegis FIghter, Twin Striker, Blast Archer, Spell Caster, and the recently-revealed Heavy Smasher. The way you fight and your progression routes depend on the class you choose. You can also change class and level multiple (pretty much like in Final Fantasy XIV, even if the process is less fluid and you need to go talk to an NPC to switch), so you’re not stuck with one.

Genshin Impact is available on multiple platforms, including PS5, PS4, PC, iOS, and Android. This also means that it has been optimized to be played on smartphones, including the visuals and the touch-friendly controls.

Blue Protocol has been announced only for PC, so the developers can go all-out with the graphics without worrying about making it playable on lower-end mobile devices. Touch control support also isn’t required and the game is made to be played with a controller or the keyboard and mouse combo. While console ports are possible, a mobile release appears not likely.

A perhaps subtle difference between the two games is likely going to be cultural, and this was already visible comparing Genshin Impact to the beta of Blue Protocol.

Like many games developed in China nowadays, Genshin Impact is definitely inspired by Japanese games and anime, which partially bridges the cultural gap and allows it to be extremely popular in Japan. That being said, it’s still developed in China by a team of Chinese developers, who have unsurprisingly injected a lot of their own culture into it.

On the other hand, Blue Protocol is developed in Japan by a team of Japanese developers, which means that it’s more closely tied to Japanese ideas of classic fantasy. This may also reflect in the gameplay, albeit it’s early to fully assess the difference.

Blue Protocol has been announced only for PC and it’ll release in Japan in early 2023. More news about the western release is coming at The Game Awards on Dec. 8, 2022.