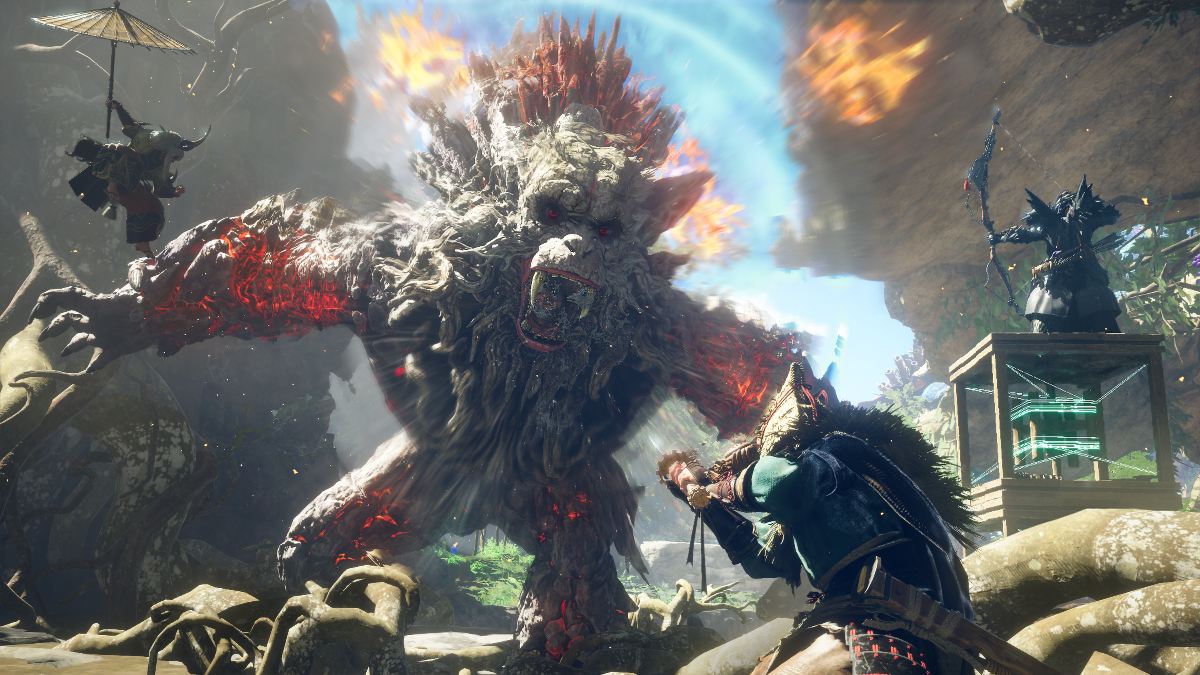 For the longest time, the hunting genre has been a personal blind spot of mine in gaming. Despite being drawn in by the sheer scale and magnitude of the battles shown in titles like Monster Hunter, the gameplay was always far too rigid and complex for my liking. Even having only played EA and Koei Tecmo’s Wild Hearts for three hours, I firmly believe that this title will finally convince me to give the genre a solid try.

Wild Hearts takes place in Azuma, a beautiful mixture of feudal Japan and fantasy, filled with nature-infused animals, called Kemono, of all shapes and sizes. One day, these typically peaceful beasts begin rampaging across the four different season-specific areas of the local, and it’s up to the hunters and their ancient Karakuri technology to stop them.

As soon as I jumped into the preview build, I found myself already enjoying the movement a lot more compared to other games I’d played in the genre. There’s a nice combination of arcadey, speed-focused action, and strategy in Wild Hearts’ combat, as the game uses a stamina system to make it so players can’t just spam moves.

Combat is also pretty intuitive, with a simple focus on attacking and dodging instead of an over-reliance on combos. Whether I was fighting small or large enemies throughout the preview, it wasn’t hard to pick up on the best way to attack.

Did this lead to a little bit of repetition? To an extent, though a lot of that came down to the fact that there were a handful of the same charging enemies in this build. This repetition is alleviated the further Wild Hearts progresss, mostly thanks to unlocking more Kakuri technology.

Kakuri technology is a feature in the game that lets players craft a variety of weapons that can be created to help out on the battlefield. In order to build these items, players need to scavenge battlefields and defeat different enemies that dole out the necessary materials for crafting, so there’s definitely a little grind behind getting the best loadouts. It’s all worth it in the end, though, as it opens up the gameplay considerably.

What starts as hack-n-slack encounters at the start of the preview evolves into fights where I was jumping off platforms that I built in order to use my umbrella sword as a propeller so that I could fly over my massive opponent and place a bomb that would stun them.

Co-op is also going to play a huge role in Wild Hearts, as the title features drop-in multiplayer and dynamic difficulty. That means that any time friends join, you don’t necessarily gain an advantage on the beasts automatically.

To do that, roles and strategies must be formed, with each player focusing on different armor, weapon, and karakuri implementations to help facilitate others’ in the group. Having someone that focuses on speed, another person that is all about defense, and one on damage plays a large role in being able to take on the scaled-up enemies and special missions that are available to pack hunters.

Thanks to that aforementioned difficulty scaling, Wild Hearts is a game that can also be enjoyed if you play alone too, something I really enjoy as a lone wolf player. Instead of having to convince friends to play or team up with randoms, it’s nice that I won’t be punished for simply wanting to hunt monsters on my own, especially since I like to take things slow and explore at my own pace.

And while what I played of the game was pretty on rails, what I got to see of the Hanagasumi Hills Spring locale of Azume was simply breathtaking. Developer Omega Force really went the extra mile to create some awesome locals and backdrops for the game, which is really going to help immerse players into its world.

Even the Kemono featured unique looks and actions that helped the world feel more alive. In the Spring area of the game alone, there were squirrels, Kingtusk boars, and Deathsalker wolves, each with their own plant-infused designs and movements that blended with the region to make for some gorgeous scenes.

Only time will tell as to whether the combination of Wild Hearts’ intricate gameplay mechanics, heavy focus on co-op, and detailed worldbuilding will come together to make for a breakout game in the hunting genre. With that said, you should definetly be keeping an eye out for it when it releases on Feb. 17, 2023, for PS5, Xbox Series X|S, and PC (Origin, Steam, and Epic Game Store).