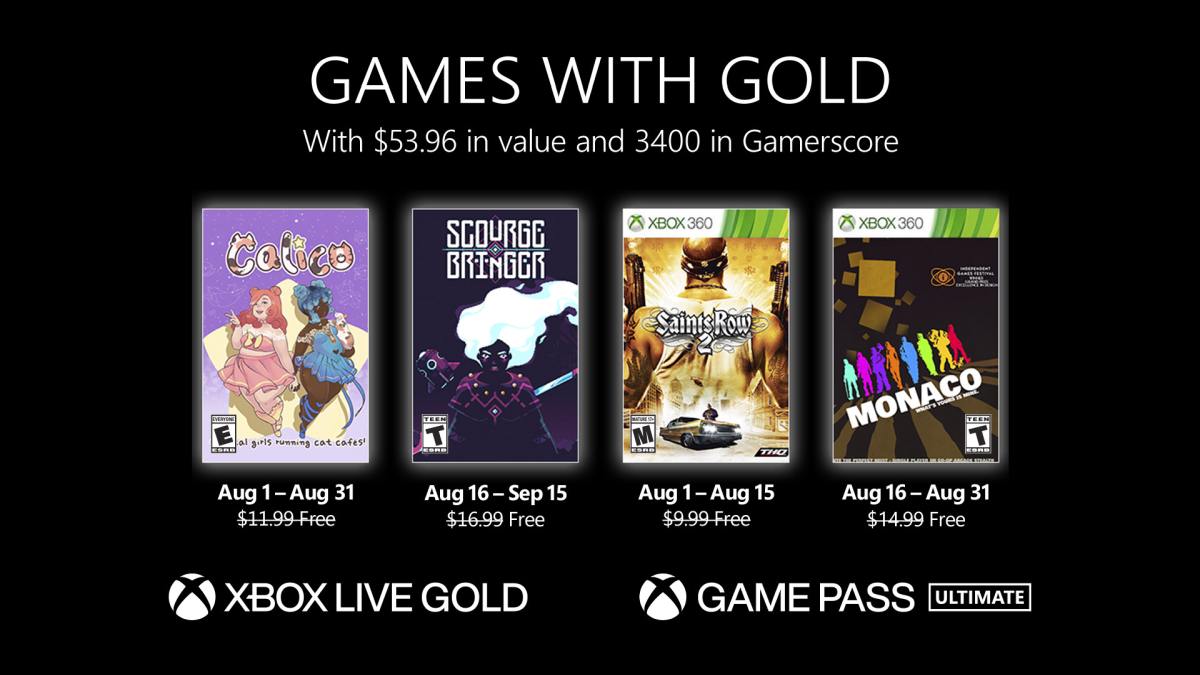 Today Microsoft revealed the new batch of games that will be granted in August 2022 to Xbox Live Gold and Xbox Game Pass Ultimate subscribers at no additional cost.

If you’re not familiar with the games, you can read an official description for all of them below.

You’ll need to channel the right cat-titude in the totally charming and fuzzy sim game Calico. It’s up to you to rebuild the town’s run-down cat cafe. Create your character, choose fun clothes to wear, whimsically decorate your place for cats and human visitors, and of course fill it up with the adorable animals. With magical potions, you might even be able to ride your giant cat to work. This game is low stress, creative, and simply paw-some.

Slash your way through a post-apocalyptic world as Kyhra, the deadliest warrior of your clan. Explore the fast-paced roguelite platformer ScourgeBringer. Attack your enemies and bosses that guard the secrets of the Scourge. The ever-changing dungeon holds mysteries and mementos of past explorers that can help you move forward and, perhaps, redeem all of humanity.

A lot has changed in five years. You awaken from a coma to learn the 3rd Street Saints have been disbanded and their territory has been taken over by syndicates with corrupt corporation backing. Rebuild the Saints and take back your territory in an open world adventure that mixes humor and violence, and demands you earn respect by any means necessary.

Monaco: What’s Yours is Mine

Who can pull off the heist of a lifetime? Assemble a crack team of thieves and get to work. Choose from one of eight highly skilled and highly colorful characters each with their unique set of skills like the Pickpocket, the Locksmith, the Cleaner, and more. Play solo or with three other morally dubious friends as you sneak through nightclubs and yachts. Each stage is told from a different perspective in this award-winning game.