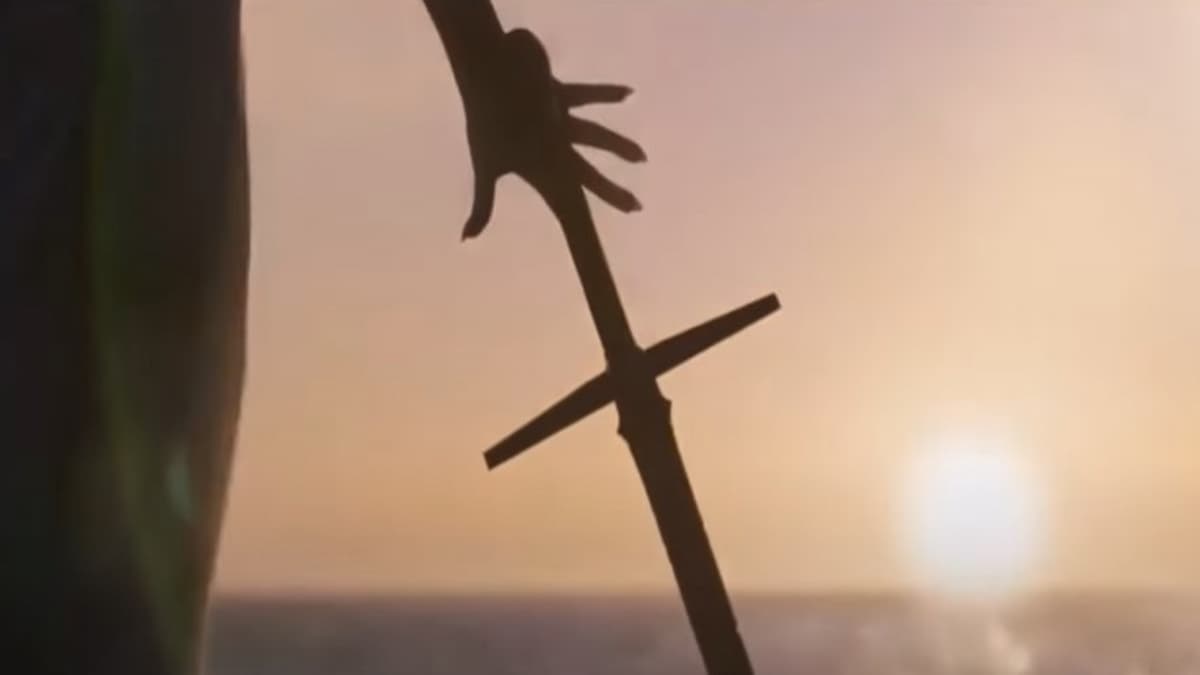 ***SPOILER WARNING: All of the content down below contains important story spoilers about Thor: Love and Thunder.***

As of right now, we don’t know who created this weapon. Even though there’s no apparent connection between the Symbiotes and the Necrosword in the MCU, it’s still entirely possible that the existence of this weapon could be hinting at the introduction of Knull.

In fact, there has been a connection to Knull in the MCU for a long time now. The decapitated Celestial head known as Knowhere was severed by none other than Knull. It’s very possible that he lost the Necrosword and has just been sitting back and waiting until the time was right.

And if that’s the case, then it’s possible we may even be getting some Symbiotes (currently owned by Sony) in the MCU like Venom and Grendel. But that’s something that’s likely years down the line if it’s going to happen at all.

Who Wields the Necrosword in Thor: Love & Thunder

Surprise, surprise, it’s Gorr the God Butcher who gets his vengeful hands on the Necrosword and slays the lazy god Rapu. This set the villain of Thor: Love and Thunder down the path of hunting down and killing every God.

What the Necrosword Does in Thor: Love & Thunder

Despite the Necrosword seemingly not being a Symbiote in the MCU, this dark weapon still carries the important characteristics of the blade from the comics along with it.

The Necrosword still corrupts the user of the weapon in the MCU. It may not be a Symbiote since Sony currently owns the rights to them, but this weapon still affects Gorr in Thor: Love and Thunder. As we see in the beginning, Gorr’s skin color is nothing out of the ordinary. It’s just Christian Bale’s fleshy self.

Then when he picks up the Necrosword he becomes ever so slightly paler. And the next time he’s seen in the film, Gorr’s skin is completely white. The sword also seems to be the driving factor behind Gorr’s rampage. As we see at the end of the film, he decides to spare the gods following the apparent destruction of the Necrosword.

This is one of the first abilities of the Necrosword that Gorr is seen using in Thor: Love and Thunder. He just stabs the blade into the ground while standing in a shadow and different beats start slowly to emerge from the ground.

Gorr is seen using this ability of the Necrosword when he first travels to New Asgard. Thor swings and misses multiple times as Gorr seemingly disappears into thin air. It’s then revealed that this villain is able to move through the shadows while holding the Necrosword.

This is inarguably the most important ability of the Necrosword. Without the ability to strike down Gods, it’s just a powerful and cool-looking sword. Some of the gods probably wouldn’t even know or care about the blade if it couldn’t kill them. This is ultimately what gave Gorr the opportunity to earn his God Butcher moniker.

That’s all there is to know about who wields the Necrosword in Thor: Love and Thunder and what it does.