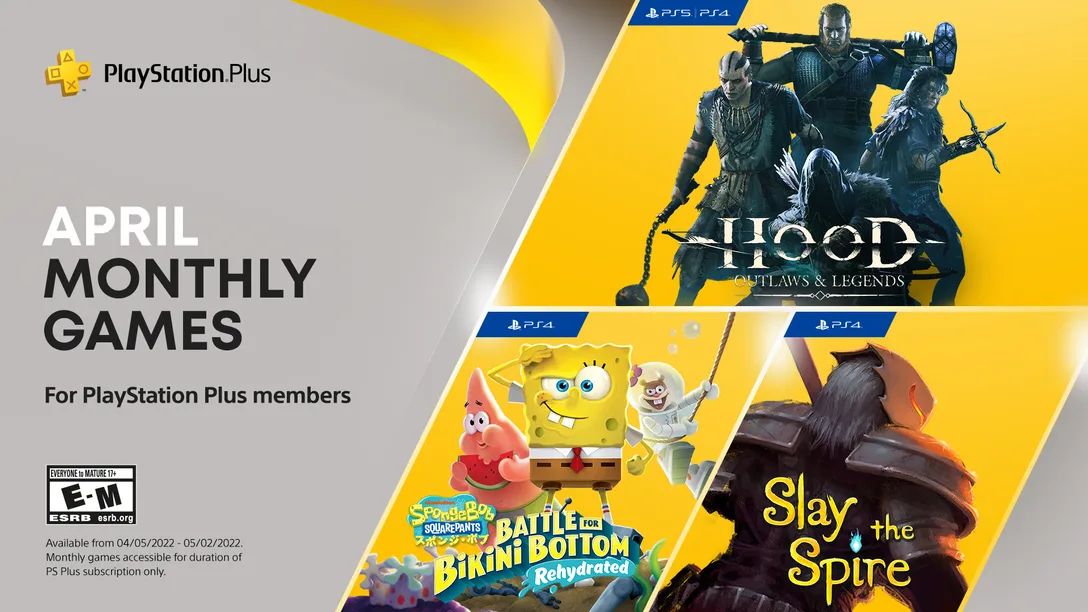 Today Sony Interactive Entertainment announced the games that will be granted to PlayStation Plus subscribers in April 2022 at no additional cost.

We’re getting Hood: Outlaws & Legends for PS4 and PS5, SpongeBob SquarePants: Battle for Bikini Bottom – Rehydrated for PS4, and Slay the Spire for PS4.

We also learn that Persona 5 will be removed from the PS Plus Collection on May 11.

The new games will be made available on April 5 to PlayStation Plus subscribers.

This comes hot on the heels of the news about big changes coming to the PlayStation Plus services, but these won’t be effective before June.

Hood: In this intense online multiplayer2 title, rival gangs compete in daring heists to hit the wealthy where it hurts. One of the different game modes is State Heist: a full coop PvE mode where teams control spawn points to recuperate as much gold as possible. In Gold Rush PvPvE mode however, two teams of four players battle it out in an attempt to execute the perfect heist, stealing and extracting treasure while fighting each other and the AI Guards. Equipped with unique skills and mystical abilities, each character moves in stealth to steal treasures unseen. It’s up to you to recruit your band of outlaws, master formidable fortresses and outplay your rivals.

The classic platformer returns, faithfully remade in spongetastic splendor! Play as SpongeBob, Patrick and Sandy and use their unique sets of skills to thwart Plankton’s evil plan to rule Bikini Bottom with his army of wacky robots. Meet countless characters from the beloved series and enjoy horde mode for up to two players, online and offline.

Embark on a journey up the ever-changing Spire, in this fantasy deckbuilder adventure that fuses together card games and roguelikes. Craft a unique deck from hundreds of cards to efficiently dispatch foes and reach the top. Discover powerful relics to enhance your deck’s powers to help you overcome different enemies and bosses.

You still have until April 4 to add March’s PlayStation Plus lineup to your collection before PlayStation makes those games unavailable.