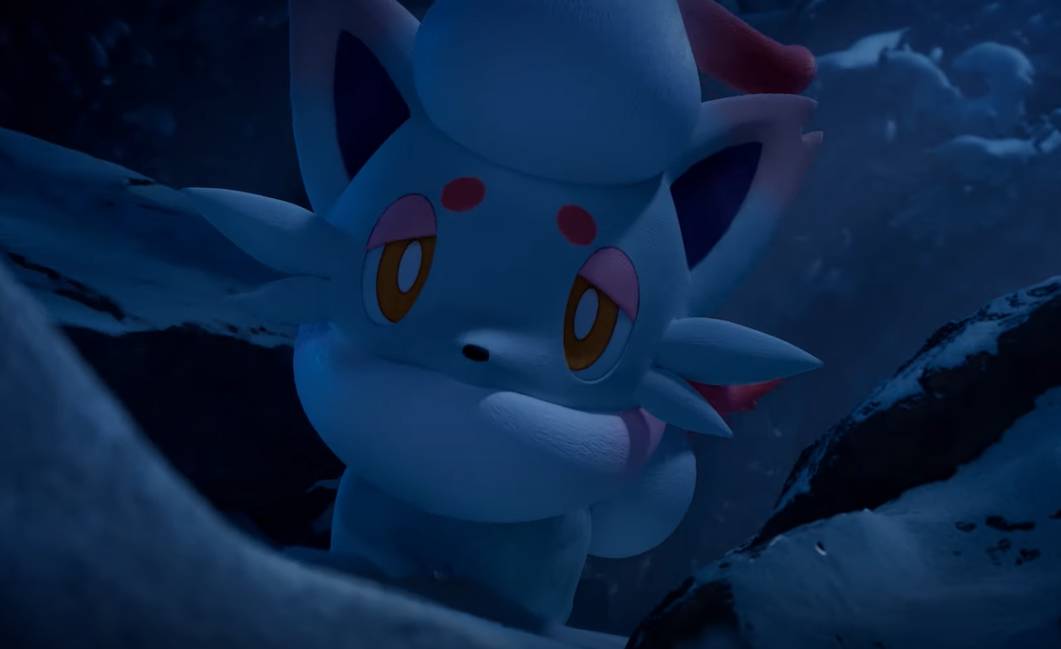 Two days ago, mysterious footage from Pokemon Legends: Arceus was shown that teased a new Pokemon, though it was too low quality to tell what exactly was happening. Today, that footage has been “restored,” and we have a clearer picture of the new discovery.

It’s the same footage as before, except it no longer has the poor quality VHS filter or distorted audio. We can clearly make out the researcher trekking through a snowy area in the Hisui region into what appears to be a cave. He marvels at some Snowrunt before venturing deeper inside the cave.

Suddenly, he spots something we’ve never seen before: a small, white fox-like Pokemon. We soon get a closer look and it appears to be a Zorua, but it looks a bit different than the black and red Dark-type we’re used to seeing.

This Zorua is exactly how it was described in the previous footage with a red tipped tail and fluff on its head and neck. Just as the researcher is commenting on how adorable it is, we see a shadowy figure emerge from behind it, and it attacks the researcher.

It happens so quickly, and we can’t get a great look at this shadowy figure. It’s huge with bright eyes, and it’s not like any Pokemon we’ve seen before.

The video ends with the Zorua and its evolved form Zoroark, also in its Hisuian form, inspecting the researcher, who is either hurt or even possibly killed from the encounter. Pretty dark for a Pokemon game, but it’s okay because we get a good look at both of the new Pokemon here.

How did you like the new Zorua and Zoroark forms being revealed in a mysterious trailer like this? You can watch the full “restored” footage trailer below. Let us know what you think the shadowy figure could be.

Pokemon Legends: Arceus releases early next year on Jan. 28, 2022 on the Nintendo Switch.