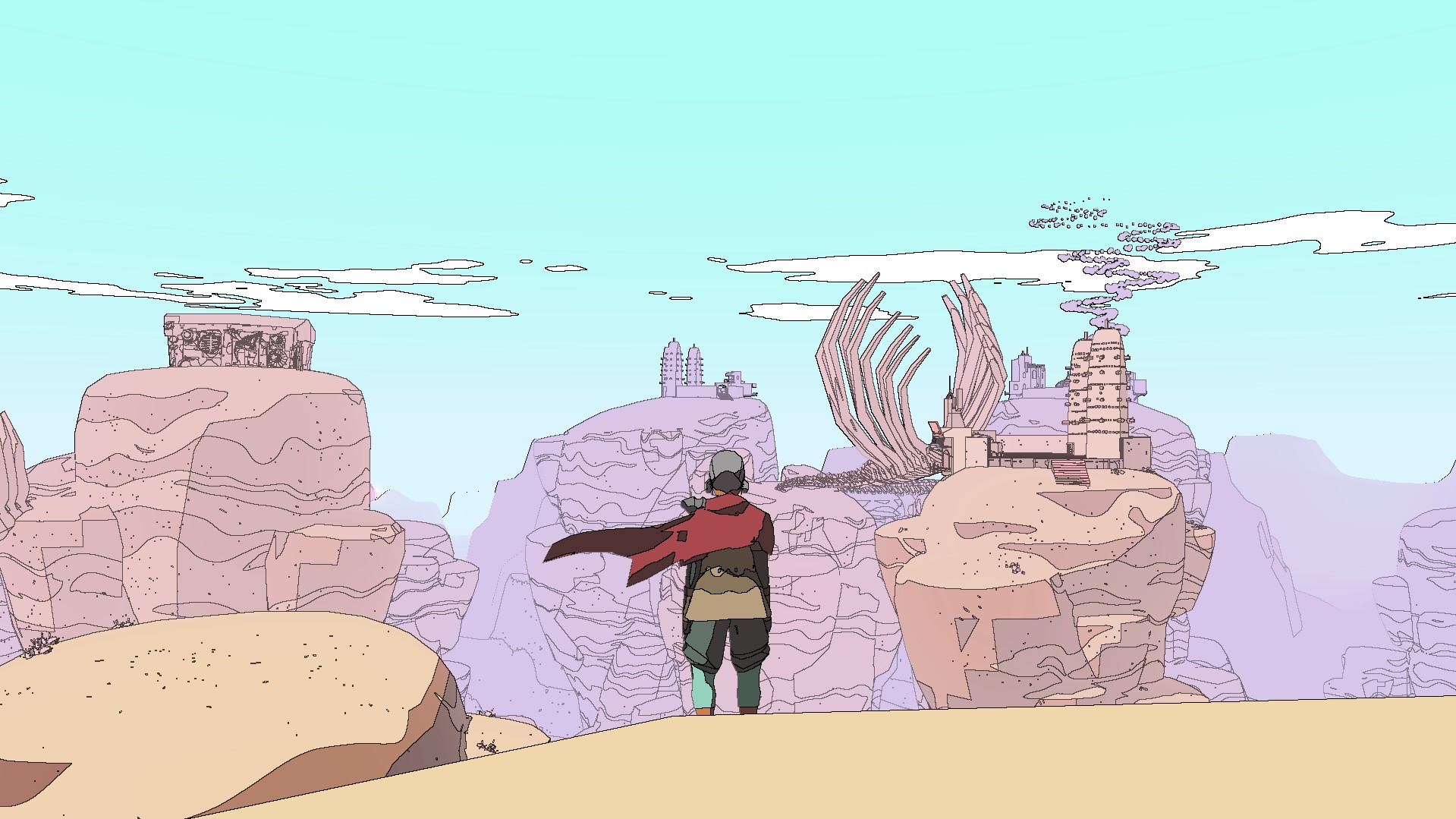 I remember watching Sable’s announcement trailer for the first time at E3 2018. Its striking art style, mysterious structures and Japanese Breakfast’s ‘Glider’ powerfully accompanying the wondrous scenes onscreen as the soundtrack. The promise of a coming-of-age tale of discovery through exploration across a sprawling alien planet had me immediately add the game to by shortlist of games to keep an eye on in the future. However, having poured countless hours into it over the past few days, it’s not quite the atmospheric adventure I was hoping for.

Sable follows the story of… Sable, a teenager and member of the Ibexii tribe who is about to set out on her Gliding — a rite of passage for all teenagers where they must visit a Mask Caster. It can be short or long, depending on how long the Glider needs to take to figure out what their calling in life is. That’s what you do, you visit, choose and leave.

It’s an interesting premise and one that almost seems to commentate on our society’s insistence to shoehorn ourselves into careers as soon as possible in the pressurized rat race of today’s world, all for the sake of earning that paper. How would life be if we took the time to truly understand what was important to us, and what our true calling in life is? Would we be happier? What would we learn along the way? It certainly had me thinking, even hours after I stepped away from the game, and to that extent, I think Sable succeeds.

In order to earn these masks that prove our protagonist’s capabilities in particular roles, Sable must leave her tribe’s camp and explore the vast, sprawling desert terrain of the world of Midden. Amidst long stretches of sand and very little else, you’ll stumble upon Beetle Stations, a great place to meet people in need of a hand.

Speaking to people here will often grant you with a quest, allowing you to earn a Badge for one of a few different walks of life. Help a Beetle Station owner and you’ll get a Beetle Badge, helping a Machinist out with their more technical troubles grants you a Machinist Badge and so on. Earning three of the same badge allows you to trade them with a Mask Caster for that ‘role’s’ Mask.

Meeting and conversing with the cast of characters is one of Sable’s strengths. The writing feels particularly solid, to the point I looked forward to bumping into particular NPCs just to hear what they’d been up to, or to listen to them impart words of wisdom to Sable on how she should approach their Gliding. The things she should see, where she should explore next, or to just make the most of the experience.

The problem is the quests that you’re often sent on largely descent into a simple fetch quest that involves a fair bit of climbing. Go and get Beetle Poop for a Beetle Station Owner, or collect three Orange Beetles for another. I hoped this may change as I took on quests for the Machinists, but these often devolved into visiting a location, interacting with an object and then returning to inform them the job was complete. With no enemies to get in the way on Sable’s travels, there’s no combat system to help mix things up either. This is a purely exploratory adventure, with the occasional puzzle to solve along the way.

Its climbing mechanic feels a little inconsistent, largely because its art style makes it difficult to know what surfaces you can climb onto, and which you can’t. I frequently found myself nearly reaching the top of a tall stone pillar, only to slide down a side I was adamant I’d be able to climb… because it looked just like all the others. There’s seemingly no rhyme or reason to this either, and this can make traversal feel more frustrating than it should for a game focused on freedom and being a relaxing ol’ time.

There were some standout moments, however. Climbing badges often task you with working your way up towering monoliths or alien relics, and one particular Machinist quest had Sable donning her detective cap to figure out who had sabotaged a town’s power supply. Sadly, this questline fell a little flat in its conclusion. Having pointed the finger at who I believed — and the evidence I’d gathered seemed to suggest — was the culprit, the NPC I was working with seemingly dismissed my accusation, stating nothing could be done because even if there was some incredibly incriminating evidence, “that’s not how things work in Eccria.”

It wasn’t clear whether I’d done something wrong, but I got an achievement for accusing someone, suggesting I hadn’t. The game may have been trying to make a point that justice isn’t always served, and this is a lesson Sable needed to learn about the world on her Gliding, but it wasn’t just a little too unclear to really land.

This is recurring issue with Sable as I bobbed my way across the dunes on her bike. There’s a lack of direction — or a sense of freedom, depending how you look at it — that never really tells you where to go or what to do next. Characters hint at places you should visit, and a large part of the fun is in figuring out what you should be doing. But puzzle solutions can sometimes feel obtuse, and sometimes reaching areas seems impossible and it’s unclear whether you’re suitably prepared to reach these points, or if you’ve strayed further than you were supposed to.

Beyond these quests, the world of Midden does offer up a few other activities to shake things up a bit. Cartographers sit atop vantage points, selling maps to Gliders in need of a bit of extra guidance throughout the world (who can reach them). Puzzle Ships lay dormant, awaiting an inquisitive mind to crack their inner workings, opening the door to their cockpit so Sable can learn more about the mystical ruins of Midden. While Chums — weird pink worm creatures — grant you Chum Eggs which can be returned to the Chum Lair to increase Sable’s stamina, in turn allowing her to scale up cliff faces and mountains for longer before falling.

There are also just really interesting ruins from previous civilizations, a particular standout being ‘The Watch’ which provides a fun sundial-based puzzle that acted as a breath of fresh air amidst the stuffy repetition of fetch quests, climbing, and the battery-based puzzling of the ships. These are few and far between, though, and given how empty Sable’s map can often feel, I wish developer Shedworks had spent a little more time populating the map with some more varied activities and things to do, rather than leaving it to feel so barren.

Ultimately, though, I often myself wanting a little more from Sable. After a few hours I felt like I’d seen most of what I was going to be doing for the duration of my adventure, and I was right. Complete a few quests, earn a few badges, get a Mask, onto the next batch of NPCs. I might occasionally buy a new part to customize my ship, slightly improving its stats, but there aren’t races to partake in. Clothing could be found to mix up Sable’s look, but these are simply cosmetic changes.

The more I played Sable, though, the more I found myself enjoying just exploring Midden’s farthest reaches, and ticking off the random things that I was tasked with doing. Finally figuring out the solution to a Puzzle Ship often left me with a satisfying ‘aha’ moment, and clambering my way to the top of a tall mountain and overlooking enormous skeletons of long-deceased creatures now used as bridges to settlements across a series of peaks was quite awe-inspiring. But then I spotted a ship teetering atop a peak in the distance and climbed, jumped and glided my way over it, only for my chief complaint to rear its ugly head once again.

It was empty, with nothing for me to interact with. No collectible to gather to at least make the excursion feel worth it, or a little contextual tidbit to help flesh out the fascinating alien world. For all the neat little things you’ll find laying in wait to be discovered across Midden, there are countless other interesting landmarks that feel incomplete. As if the development team forgot to add something in, or were simply put in there to encourage you to spend more time in the world, only to be left disappointed once you reach them.

Sable’s the kind of game I recommend dropping into for a few hours at a time, and then putting down again. It’s difficult to binge in lengthy sessions because of its open-ended freedom. It’s a blessing and a curse. It’s fun to just explore, but you never know whether hours of your time doing so will turn up anything of interest. You could just bumble about on Sable’s bike, hoping to find something that’ll give you a quest marker so you at least know your journey will have an interesting outcome, and never come across one, taunted by a landmark that seems important, but offers nothing.

There are a few technical issues that should be highlighted here, too. While Sable’s striking visuals and moody soundtrack add to the sense of intrigue you’ll be overcome with when exploring Midden, the framerate seemed inconsistent at best, and seriously choppy at worst. It’s particularly problematic in built-up areas like the Beetle Stations, where even the audio seemed to loop over itself, creating an obnoxious mish-mash of sounds, or just skip every so often.

A patch was released which has improved the framerate slightly, and developer Shedworks is apparently working on another update that will address a number of these issues, but I can only base my review on what I’ve experienced, and it lacked the level of polish a game this focused on style over substance requires to really deliver.

Sable will find an audience that truly adores its free-form exploration, stylistic visuals, engaging writing and chill soundtrack, but for me, these redeeming qualities were lost in a sandy sea of emptiness and repetition in its core mechanics. Its messages certainly resonated with me but its gameplay lacked the variety to truly keep me hooked for lengthier sessions. If you’re looking for a chill experience and can overlook any performance issues that aren’t quite resolved by the time you pick it up, then Sable will deliver. I just can’t help shake the feeling of missed potential here.