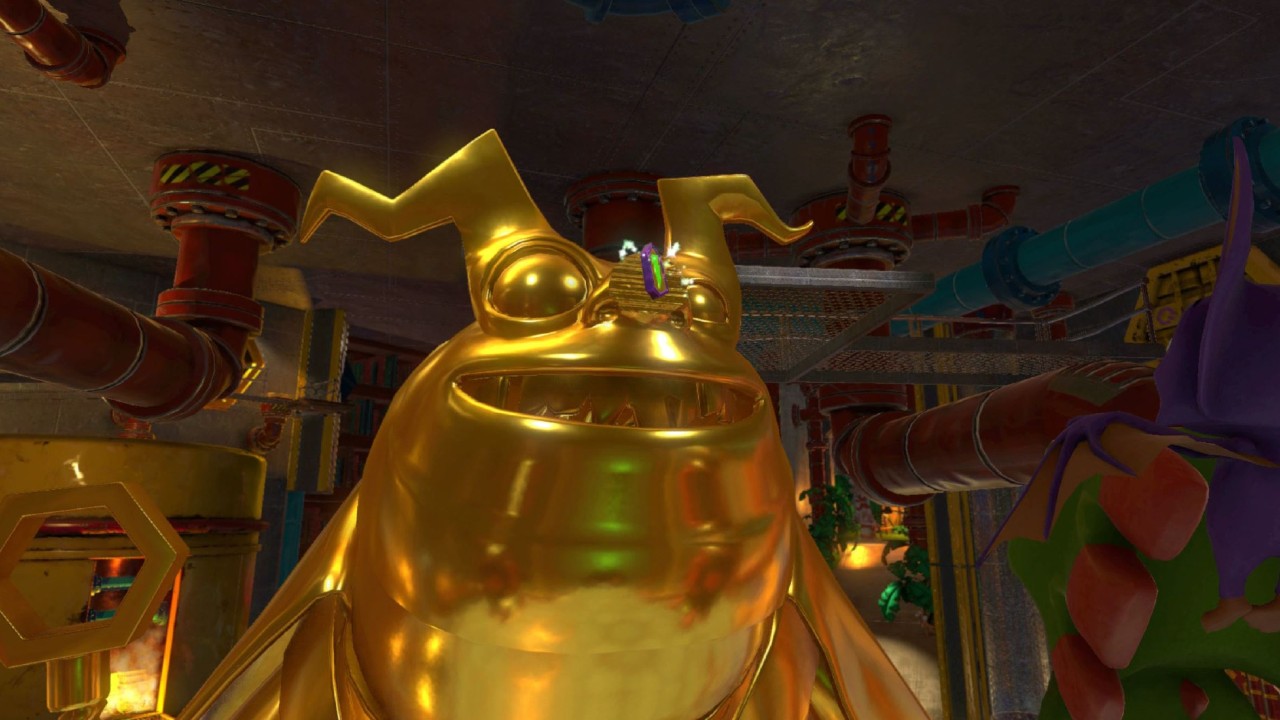 Rare’s spiritual successor to Banjo-Kazooie, Yooka-Laylee, took every bit of what made Banjo so memorable and upgraded it for the newer generation. With the game going free as part of the Games with Gold service, many newcomers are going to be trying out this platformer. As such, we’re bringing you a guide for one of the more important collectibles in the game, the power extenders. Collecting power extenders in Yooka-Laylee will increase the duration that you can utilize your powers, making the game so much easier. Finding all of these will not only upgrade your character, but will unlock the “Bar star” achievement for you as well.

The first power extender can be found in Hivory Tower, in the nose of Capital B’s golden statue. Head into the room with the statue and go toward the furnace in the back. Follow the metal ramp up, past the halfpipe. At the top of this ramp, where the large control panel is, instead of continuing up the ramp to the right, jump left onto the moving platform.

Complete the platforming here, all the way up to the top of the golden statue. Stand on top of the nose and perform a Buddy Slam (ground pound) to knock the nose off. This will reveal the first power extender and also unlock you the “Petty vandalism” achievement for disrespecting the idol.

The second power extender can be found in the Crystalline Cave in Glitterglaze Glacier. Before you can get it, you’ll need to purchase the Slurp State move from Trowzer, so collect some quills and head to her. She can be found in the entrance area; just head straight through the cave that you spawn in and it will lead you right to her.

Once you get the move, head back to the entrance and climb up the platform behind the book to find the entrance to Crystalline Cave. Immediately to your left, you’ll find some cannonballs, so use your Slurp State on them.

In front of you will be an icy slope that you can slide down. Do so, while hugging the left wall. The power-up will make you heavier, such that the breeze from the fans on the left wall will not blow you to the right, allowing you to access the power extender on the snowy platform.

The power extender in Capital Cashino is easiest to obtain after transforming. This world’s transformation is the Chopper, so head to to Dr. Puzz, who can be found at the ground level in the middle structure of the map, where all the slot machines are. The Mollycool needed to transform can be unlocked by simply winning at slots with three Yooka-Laylee symbols.

Grab the Mollycool and interact with her, then stand in front of the ray to be transformed into a helicopter. As the Chopper, fly up and look around the walls of the casino for the large purple and yellow banner with hieroglyphics.

In front of this banner is a giant gold cabinet, and the power extender can be found sitting on top. It’s actually possible to get up here without being transformed by doing some platforming, but this method is significantly easier, and you’ll need to transform at some point anyway.

To find the Galleon Galaxy power extender, you’ll need to enter the Cosmic Cavern. To do this, you’ll need to first undergo the transformation. Fly up to the very top of the lighthouse and grab this world’s Mollycool.

Head to the dock area at the back of the map to find Dr. Puzz. Before cashing in your Mollycool, however, talk to Trowzer (who is just a few feet away) and purchase Sonar Shield. Use her ray gun to transform into the Space Ship. Use the cannons to smash the boulders ahead of you, then follow the instructions until you are free to swim around the world. Head toward the back corner of the lake to find a collection of yellow boulders blocking a cave, next to a wooden bridge. Destroy these boulders with your ship.

Go get un-transformed, then return to the now open Cosmic Cavern. Traverse through the first room and into the second. In the right wall, you should see an opening with a quill. Jump up into this and use Sonar Shield to jump through these red lasers, into a large rolling tube course.

The power extender is on the axis of this tube, so use your Sonar Shield to ride the tube up, then jump onto the axis to grab the collectible.

Even though this is the first area of the game, you won’t be able to earn this power extender until you return later after expanding the world. Ascend the monument until you come to a crate of cannonballs. Use Slurp State to get its power-up to make you heavy, then continue further up the path that you could not access in your first venture to Tribalstack Tropics.

Continue to climb the monument, taking ramps and elevators until you reach a large circular platform with a cannon named Blastooie. Stand next to the cannon and look right to see a sleeping totem on the wall. Use Sonar Shot to wake it up, revealing an elevator.

Take the elevator up and continue along the path to the peak of the monument, where the power extender can be found.

The last of the power extenders in Yooka-Laylee comes in the third world, Moodymaze Marsh, after it has been expanded. Make use of Flappy Flight to fly to the far end of the level, where you can find a pool of water with numerous floating wooden pallets, and some jack-o-lanterns.

Land on the ground next to these jack-o-lanterns, and follow the pathway up a bit, until you reach a wooden platform with a large pumpkin on top. Use your Lizard Lash to climb up.

Continue up this Lizard Lash obstacle course, all the way until you reach a platform with these two green and yellow spike balls. Lizard lash across to the next platform and turn around 180 degrees.

With that, you’ve snagged all six of the Yooka-Laylee power extenders, and should find yourself a solid 20 Gamerscore richer than before. If you’re looking to fully complete this game, you’ve got much more work to do, however. On top of power extenders, there are health extenders, ghost writers, pirate treasure, tonics, quills, and Pagies left for you to collect in this collectathon, but with additional power now, those all should come even easier.