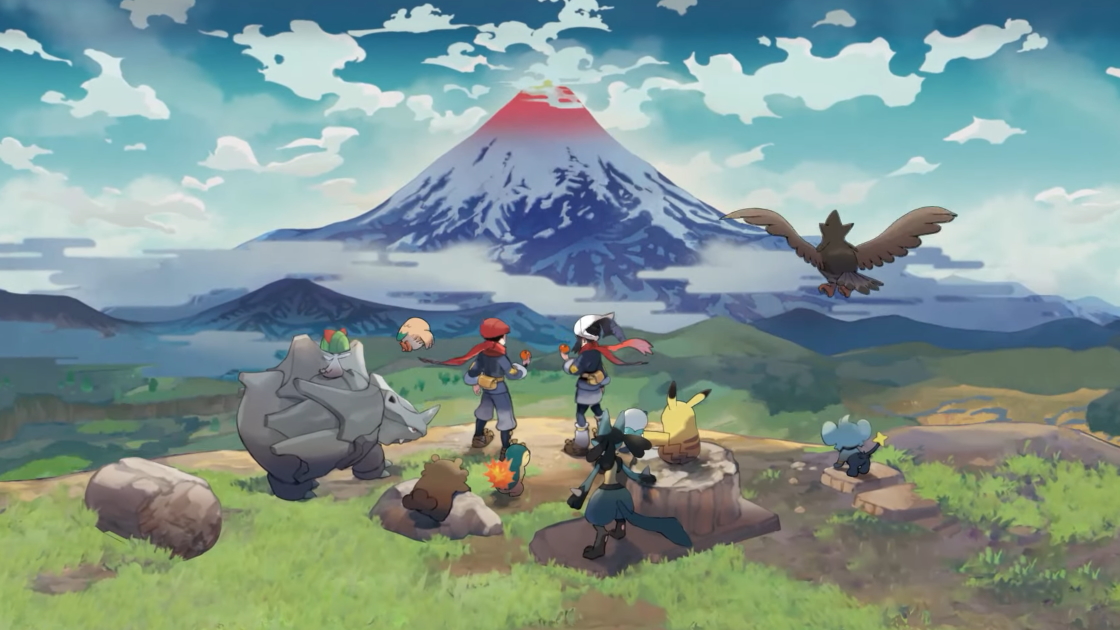 Pokemon Legends: Arceus received a brand new in-depth trailer during the Pokemon Presente event today. We saw a huge breakdown of information about the game and what we can expect as far as gameplay and features.

The game will take place in the Hisui Region, which is the ancient land that would one day turn into the Sinnoh Region. It’s a time when the lives of humans and Pokemon were still separate.

The goal of Pokemon Legends: Arceus is to work with the Survey Corps that resides in Jubilife Village in order to research Pokemon in the region and learn how they live by observing and capturing them.

We’ll start the game in Jubilife Village, the base area in the game that we can return to between adventures into the wild areas. You can start with either Cyndaquil, Rowlet, or Oshawott on your adventure.

Outside of Jubilife Village, the land of Hisui is untamed with roaming, hostile Pokemon. We see a pretty large variety of ecosystems in the region, and it is completely open for us to explore.

You’ll be able to sneak up on Pokemon to capture them with a Pokeball. If they are too difficult to catch, you can engage in battle with them by throwing a Pokeball with one of your own Pokemon.

Since the region in Legends: Arceus seems to be quite large, there will be other methods of travel besides walking, and two of these include new Pokemon.

First, you can jump off of a ledge to fly, similar to Breath of the Wild’s parasail or Skyward Sword’s Loftwings, by calling for a Braviary.

You can also swim through waters with Basculegion, a brand new Pokemon evolved from Basculin. Finally, you can ride on a Wyrdeer, which is an evolved form of Stantler. Growlithe also gets a cute new regional form (Hisuian Growlithe) with long fur growing over his eyes.

There will be various camps around the region that you can return to at any point to stock up on items or even craft new ones with materials you’ve found. This is a good opportunity to heal because if wild Pokemon attack you too much, you’ll black out and return to your base.

This means that not only Pokemon can be hurt, but your player character can be too, and we see a few giant evil-looking Pokemon such as Ursaring and Luxray with glowing red eyes chasing after the player. These appear to spawn at certain times when lightning strikes.

The Hisui region is crawling with wild Pokemon ready to be caught, so you’ll be glad to know that Pokemon Legends: Arceus will release on January 28, 2022.

Since the game is connected to Sinnoh, there will be connectivity between Legends: Arceus and the upcoming Brilliant Diamond and Shining Pearl via Pokemon Home.

If you’d like to see the entirety of the trailer in-depth, you can watch it below. You can also learn more information by visiting the game’s official website right here.