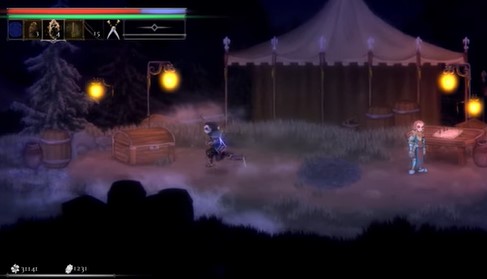 Earlier today, the team behind Salt & Sanctuary revealed a new trailer that went into detail on the multiplayer modes in the upcoming game Salt & Sacrifice. Online co-op was one of their most requested additions for the team’s last game, so this time they’ll have it available along with PvP.

In this game, your character bears a mark that indicates you are cursed and a guiltless shared can be used to become atoned. While in the atoned status, you’ll be able to summon others into your game, but your game world will also be prone to invasion.

But any character who is wearing the amulet of the oathbound watcher will essentially become your protector against invaders. This gives the host player an advantage over anyone who attempts to invade their world.

Members of the blue heart runner faction have a balance of PvP and PvE built into their style of gameplay. These players have to take out hazeburnt and collect their ashes in order to summon haze wraiths that can attack other enemies or even other invading players.

There will also be the option for players to play solo or co-op with a friend via a password system built into the game. The summoning candle item will prevent other players from invading your world.

Salt & Sacrifice is set to release in early 2022. You can check out the official trailer that was released today down below.

And if you just can’t get enough game reveals, then check out the full Future Games Show stream down below.