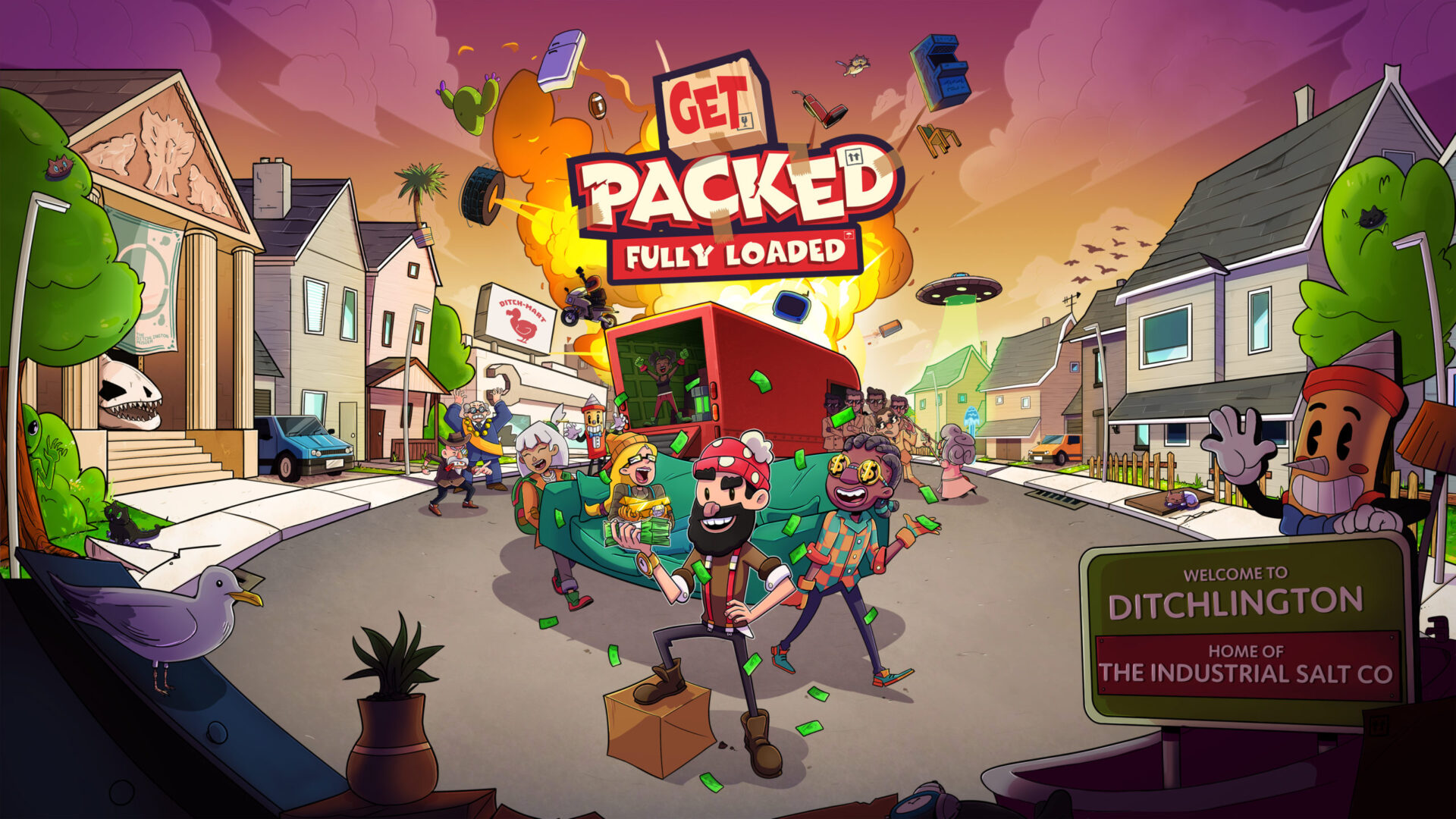 The couch co-operative party game genre has enjoyed a welcome boon over the past five or so years, and UK publisher Coatsink has been right at the heart of its resurgence. From the whimsical combat of Gang Beasts to the family-friendly fun of PHOGS! and Cake Bash, it’s found tremendous success in supporting light-hearted, accessible multiplayer experiences. And with the launch of Get Packed: Fully Loaded from developer Moonshine Studios tomorrow, there’s yet another on the way.

Of course, Get Packed has already been out for over a year; the game launched as a Google Stadia exclusive back in April of 2020, but tomorrow sees the release of a new, enhanced version that includes a whole stack of new content. Better yet, it’s coming to PlayStation, Xbox, and PC platforms in addition to Stadia.

Following on from Twinfinite’s coverage of the original game last year, we thought it would be a grand idea to catch up with the team at Moonshine once again and hear about how they’ve been getting on over the past 18 months, and what we can expect from Fully Loaded later this week. Moonshine Studios co-founders Marcus Gardner and Jamie King joined me in in a Zoom call earlier this month.

“…when we launched on Stadia last year, it was right in the middle of the pandemic, so we had a remote launch that was much trickier than if we were in the office together,” Gardner explained to me in a Zoom call earlier this month.

“But the launch went very well,” he continued. “The Stadia community is fantastic. It was really nice to see a lot of the community get together and play online together. Since then, we’ve been working hard on getting the content that we promised out there.”

Gardner is referring to the fifth chapter of content that the team intended to launch later down the line following its launch. But just as it has done for businesses all over the globe over the past 12 months, COVID-19 put a major spanner in the works. Still, even if it’s taken longer than expected to arrive, the positives are that not only is Chapter 5 included in Fully Loaded but it’s much improved and far greater in size for the extra time spent in development.

“…as we’ve been adding more content, that content has expanded, so we ended up putting a lot more in than we originally anticipated. We have an additional stage, a versus mode, new levels, as well as a whole game mode,” he explains.

“On Coatsink’s side, they were expanding and improving the online net coding side of things to make it a lot more stable too. As you can imagine, physics net coding is quite a tricky process, especially if you have as many things going on in a scene as in our game. But overall, we’ve all been working hard on improving things and so we were really excited to launch. This more fully-fledged version out with all the extra content that we intended to from the beginning.”

Before finding out more on Fully Loaded, though, I wanted to get a flavor of the team’s experience launching the original game last year. What sort of traction had it found on the platform, I wondered, and was the team happy with the level of interest in the game from its community? King told me:

“We don’t have access to the direct numbers because we were part of the stadia pro pack, so the game was free for three months via  Studio Pro. But that in itself was amazing to get such a massive amount of people just playing the game.

I know that at launch it was very, very busy. Maybe not so much on the online matchmaking, but on the Discord, people were matching up all the time and trying to arrange groups that way. We definitely got a lot of really funny videos on YouTube interactions via Twitter people showing what they’d done. It’s hard to judge (the size of the community) exactly. But I’m really impressed with how the Stadia community has embraced us.”

Of course, those keeping close tabs on the co-op party game scene might well remember there were obstacles standing in Moonshine’s way even beyond the pandemic and the unknown of launching exclusively on Stadia. In what was seemingly a cruel twist of fate so unfortunate it was almost laughable, just as Get Packed’s launch date was confirmed another party game about furniture removal called Moving Out suddenly appeared. Worse still, it was due to launch in almost the exact same window! I was keen to learn more about the team’s morale right at that moment.

“It was definitely a surprise for us when I first saw it,” King admitted. “We watched the trailer and thought, ‘oh, no!’. I’ve sadly not had a chance to properly dive into it yet myself, but the more we saw it, the more we realized that there are quite big differences in how they handle different mechanics and stuff. Obviously, I think it’s quite clear, both of us were inspired by games like overcooked, but I think over time we sort of went away from that direction and focused more on the online physics and the wacky sort of level stuff. I think that that’s really the major difference and hopefully, people can enjoy both of them.”

So, speaking of the sort of wacky levels and online physics that sets Get Packed apart, what’s coming in Fully Loaded that should have players both new and returning excited? Are we getting more of the same or some entirely new ideas and mechanics? Gardner explains:

Originally we already had in the plan a blocked section for stage five saying ‘coming soon,’ and that was on the cards and then, unfortunately, in order to get our game within a particular launch window that we provided, we were unable to bring out Stage 5 with that original content, but, because we wanted to add a little something extra, as we were developing Stage 5, we also went to the reuse some of the interesting physics mechanics that we already had in place on other levels, we added a like a stage 6, which has some new extra scenarios and some in some interesting physics interactions in there.

And we did take note that the community wanted some more versus levels. We only had three in there at the time, I think, and while the community did enjoy them, they wanted more. So we, of course, added some more levels to go with the new stages that we were making. Plus we also helped convert some of the existing levels to add some extra variation to that, so that players could replay some of their favorite levels but also in a more competitive environment. So we certainly took note of what the community wanted and we’re hoping we’ve delivered on that.

“For stage 5 there are some entirely new ideas and mechanics. For Stage 6, Stage 6 happened because the design artists have had more spare time than the coders. So Stage 6 is more of an epilog that pushes those old mechanics as far as we can take them in fun and unusual ways. It’s the same with the competitive side, too: the two new competitive levels which are varied and new, but the others are conversions of existing campaign levels to make some interesting new competitive content.”

More than just adding new content, the team has spent plenty of time making sure Get Packed: Fully Loaded is properly balanced, especially considering the new competitive content and the nature of its more complex levels. King detailed some of the difficulties the team encountered along the way:

“We have to consider what happens if a parent is playing with the two children, then you’ve kind of got to balance it so they can still hope to get one or two stars but, you know, there might be two people who do not play games at all versus two who are. So you have to keep this all in mind, especially because it is multiplayer and a family game.

Hopefully, we’ve found the right balance, but we’re totally up for making tweaks and adjusting it after the game launches because, of course, we all played this game for like three, four years now, so our playtests are not going to be representative of the public.”

So, does the launch of Fully Loaded mark the end of the road for Get Packed in terms of new content? I was keen to find out whether the team had any further plans for post-launch support moving forward.

“I think we certainly want to keep our options open, Garner said. “We’ve been working on the game for quite a number of years and if a lot of players really like the content that we have and are interested in having an extra expansion most initial content then it’s something we would certainly consider. As you can imagine, there are some very interesting and hectic scenarios we could add in there but it’s all a matter of time and resources really so suddenly if the players want and we can afford to put the time and effort and we certainly would

We have a whole Excel spreadsheet with like 30 or 40 different potential scenarios and ideas that we just have had no time to complete. There obviously comes a point where you have to keep a tight grip on the content you have planned otherwise you won’t ever release.”

Finally, I couldn’t help but ask whether Get Packed Fully Loaded is ever likely to make an appearance on Switch. After all, it’s the perfect game for the platform, right? Gardner agrees, and his answer at least opens the door to a possible port in the future even if the team isn’t quite ready to give a firm answer:

“The switch is almost the perfect platform for a game like ours,” Gardener said. “We can’t really say too much as we don’t really have any kind of timeline. As you can imagine, the Switch, the power it has is a lot less than something like a PC Xbox PlayStation, so it’s considerably harder to actually get the game running properly. There is a considerable amount of work to be done, but it’s not something we’ve dismissed entirely. It’s certainly something that we were considering.”

Get Packed: Fully Loaded launches tomorrow, July 29, on PlayStation, Xbox, and PC platforms. You can check out the announcement trailer below for a brief look at the action.