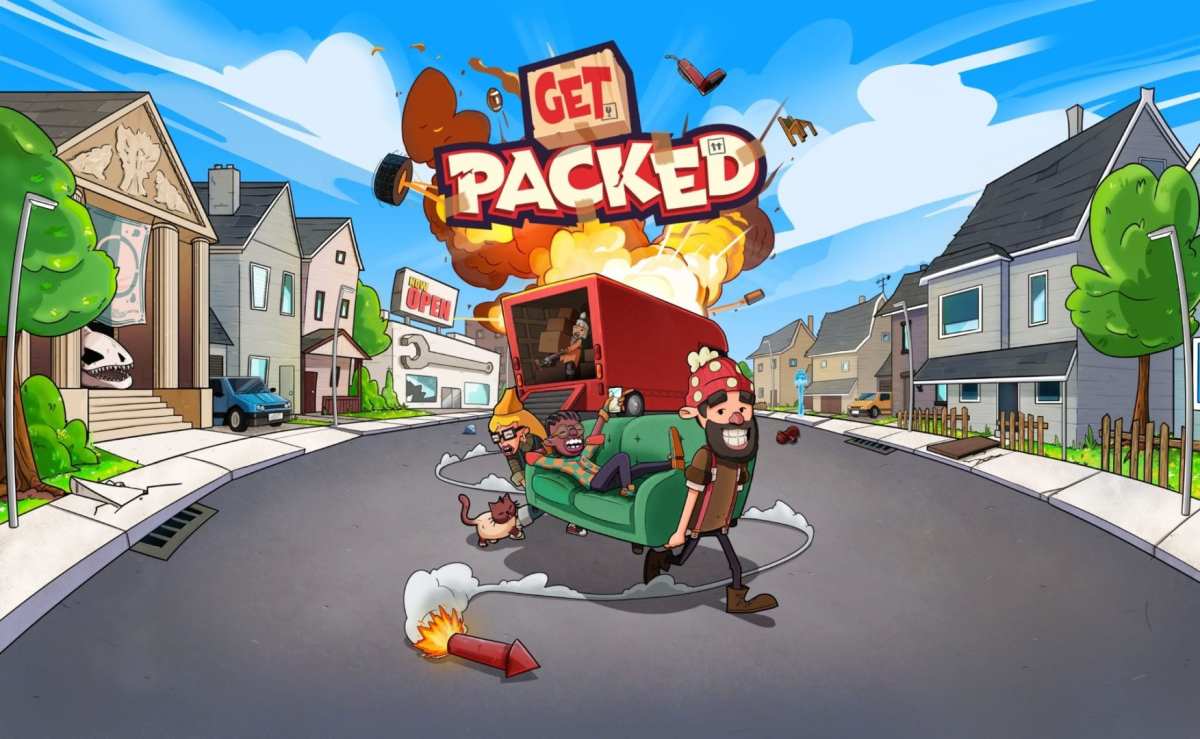 After scoring an important exclusivity deal with Google through its publisher, Coatsink, indie developer Moonshine has just released the most important project in the company’s short history. Launched today during Google’s Stadia connect, Get Packed is a game about, er, furniture removal.

But don’t be put off — while the premise might sound mundane, Get Packed promises to be one of the most thigh-slappingly entertaining co-operative multiplayer experiences in recent years.

Described as a “physics-based co-op removals game,” Get Packed shares plenty in common with other whimsical co-operative puzzle games like Overcooked.

It tasks you and up to four friends with grabbing everything you can from a particular house or business (or museum or haunted mansion) and cramming it all into your van before the clock runs out. As the story progresses, the environments and scenarios get steadily more ridiculous.

Naturally, Twinfinite wanted to learn more, and so we spoke with the team at Moonshine about its time developing Get Packed and its experiences working with Google Stadia.

Designer and Studio co-founder Jamie King: After deciding we were going to make a multiplayer cooperative game, we dove into a multitude of popular titles in the name of research, and Overcooked and Gang Beasts were certainly among them. While this helped inform elements like control systems, menu structure and theme, our biggest takeaway was the energy we wanted to capture: that frenetic, jostling organized chaos.

We loved the cooperative nature of Overcooked, but it can get quite intense when things aren’t going to plan. Meanwhile, Gang Beasts is hilarious even if you lose. Our goal with Get Packed was to maintain the cooperative spirit but combine it with the over-the-top comedy physics. The goal is ultimately to work together to rack up cash, but watching it all go catastrophically wrong is half the fun.

Alex: The physics-based mechanics in Get Packed looks as though it’ll add more than a small dose of chaos to proceedings. But is this mostly visual, or does it have a tangible effect on how games play out?

Jamie King: Any item you successfully pack and send away in your van will profit the team. Damage results in penalties and will multiply the amount of stuff you need to shift as everything breaks into bits.

Since you have to earn a minimal amount to progress, there’s a clear incentive to keep destruction to a minimum. Of course, that’s not always easy thanks to some sneaky level design. Mishaps tend to spiral. Maybe a broken chair leads to a dropped firework… and explosions definitely have a tangible effect! Rounds can exist on a knife-edge.

Outside The campaign, there’s a 2v2 Versus mode &  Destruction mode. While playtesting in the early days, we received a number of comments saying, “I wanna just destroy stuff.” Well.. your wish is our command-line.

Alex: Part of Stadia’s big unique sell point is that it removes hardware from the equation and thereby lessens the barrier to entry for players. I imagine that’s a big appeal for developers of couch co-op/party style games?

Jamie King: Exactly! Since all you need is one of your favorite devices and a few controllers to play with friends, Stadia is perfect for this type of frenetic multiplayer experience.

Get Packed was designed from the ground up to be accessible to everyone — from experienced gamers to families with no prior gaming experience. During the prototyping phases, we regularly encouraged non-gamers to play to ensure that everything from the menu design to the control scheme never became complicated or daunting to the inexperienced.

There are millions of people who enjoy games but aren’t keen to invest in expensive hardware. Stadia is the perfect solution. Now you can buy a brand new title and play it at the ideal specs using the technology you already own.

Alex: How has the team’s experience been developing for Google Stadia thus far? How has it different from conventional hardware, and have there been any challenges along the way?

Jamie King: It’s been an incredibly smooth process. Unity has fantastic integration with Stadia, so the development has been similar to a standard console title. However, thanks to the power of Stadia, we’ve been able to push the graphics and gameplay that much further.

During early development pre-Stadia, we encountered a number of challenges, particularly regarding performance, because we were dealing with so many unknowns. Get Packed is played from a birds-eye perspective and often you can see the entire map. This is a huge area to render, exacerbated by the sheer amount of manipulatable physics objects. Knowing the specifications of the target hardware was incredibly useful, allowing us to pack each area to its limit without affecting performance.

Accurate lighting was another early challenge. Baking the lighting would’ve allowed for faster render times, but with all the moveable elements it became clear that realtime lighting was the only viable solution.

Even then, it was tricky balancing the requirements of the shadow system with the destructible meshes and explosions. It looks great, but that level of chaos began to push the hardware. But these limitations pretty much evaporated when we focused on Stadia development thanks to the power of the servers.

Alex: How has Get Packed performed on Stadia servers in comparison to locally played games? Do you consider there is any perceivable lag that would potentially impact the experience?

Jamie King: We haven’t noticed any issues playtesting Get Packed but everyone’s connection is obviously different.

The Stadia team has been working hard to support our team and ensure that Get Packed runs smoothly on the Stadia platform.

Alex: Get Packed features 12 levels at launch, but do you have plans to support the game moving forward with additional content?

Jamie King: We have 12 Campaign levels right now, plus an additional 3 levels created special for Competitive Mode which will be included at launch. As we near the end of the project, we’re just adding the finishing touches right now, but will definitely look into additional content post-launch. Rest assured, we’ll be listening to the community closely.

Alex: Get Packed is a Stadia launch exclusive, so how long is the exclusivity deal and which platforms will it launch on eventually?

Jamie King: We’ve made no plans for releasing Get Packed on other platforms at this time.

Get Packed is available from today, April 28, exclusively on Google Stadia. You can check out the game’s launch trailer below.