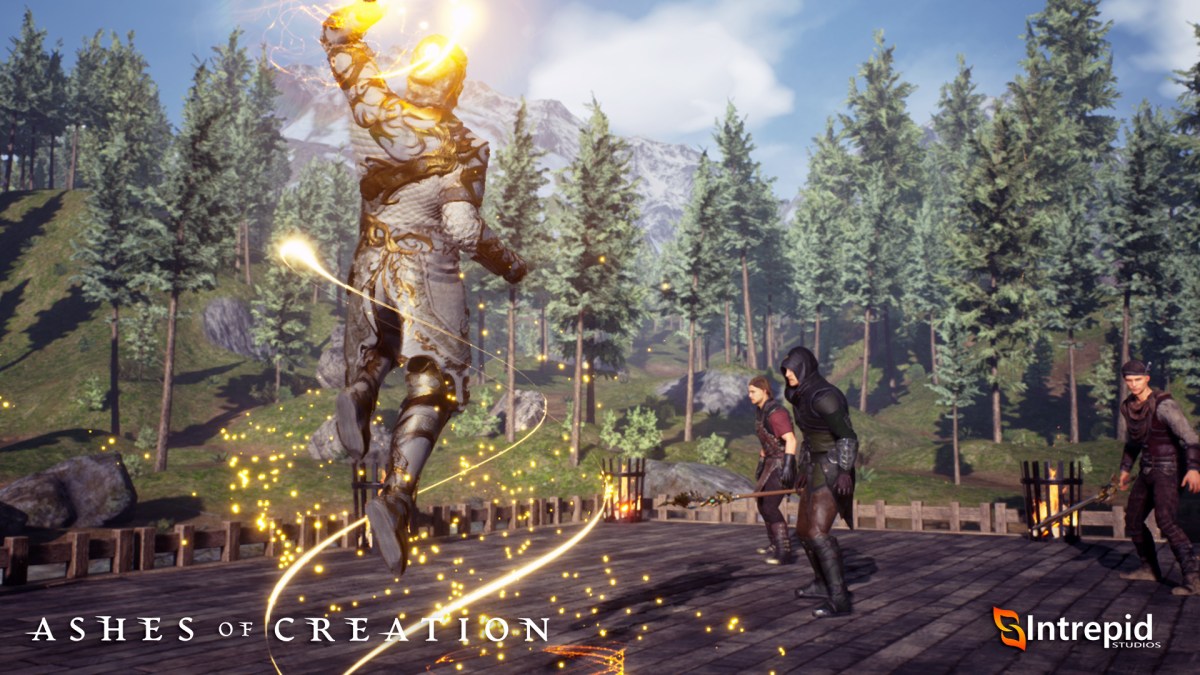 Ashes of Creation is one of the few in-development MMORPGs that has caught my eye and held onto my curiosity over a long development period. I’m an old-school MMORPG player. My first foray into the genre was Ultima Online and I would eventually transition to Final Fantasy XI as my primary game of choice for over a decade.

I’ve drifted into the more modern and popular MMOs like Final Fantasy XIV, and while that game’s fantastic visuals, writing, and story will always pull me in for a little while, it can never quite get its hooks fully into me.

In the case of Final Fantasy XIV at least, I drift in and out because the world, despite being massive, feels hollow. I rarely need to meaningfully interact with players, open areas are mostly just places you look at as you go from quest marker to quest marker, and my experience more or less is just waiting around in town for instanced content.

It doesn’t feel like an MMORPG in the classic sense. It’s more like a pretty hub world where I can do solo stuff to pass the time in between matchmade events. It doesn’t live and breathe the same way that classic MMORPGs do.

Ashes of Creation is the first MMORPG in years that really has me excited. It has the potential to marry old-school MMORPG player interaction and agency with modern improvements on the genre. And while many MMORPG developers have promised the moon and came up short, Intrepid seems like they are up to the task, and are beginning to prove it now with their Alpha-1 version of Ashes of Creation.

For years, since its Kickstarter back in 2017 where it raised over $3 million, there has been a lot of talk from developer Intrepid Studios about how Ashes of Creation intends to shake up the genre with a swath of revolutionary ideas.

The Alpha-1 preview opportunity isn’t really the space to judge Intrepid on all of these promises. The game is still in a justifiably rough state as development continues. The goal of the Alpha-1 is for players to assist with the ongoing development by stress testing, but to also give a window of transparency and a feel for what is to come.

When the world of Ashes of Creation is launched, it will be underdeveloped and mostly wilderness. As players naturally explore the game’s map, join factions, and begin to do quests, regions will naturally start to develop. Hotspots will more rapidly advance to small encampments and can eventually turn into massive cities, dominating the area around them.

In Ashes of Creation’s Alpha-1 build, I spent some time exploring the game’s map, as one of the quests encouraged me to visit three regions in order to establish a foothold somewhere. I expected to find cities, but when I arrived at the wetlands region, there was nothing but empty space and wilderness. Meanwhile, over at the desert and the forest areas, a small camp has emerged and player activity was higher.

As players quest, XP, raid, etc. in a node, it will level up, just like your individual character. Eventually, as the city grows, politics will come into play, both internal and external. Players aligned with a node will need to decide who will run their city (an actual player mayor will be elected), and what kind of city it will be. Will they focus on war, trade, science, or faith? Each brings its own set of benefits. Players, depending on their goals, will naturally flock to areas that benefit them.

Eventually, though, players will be in competition with one another as node borders collide, and PvP is an option for one node to establish dominance over another. We’re not there yet though with the Alpha-1, as again, it’s mostly a technical test and not a content test.

This was evident with the fact that there wasn’t a ton to do yet. There were a lot of “kill X stuff” quests and some light crafting, but that’s about it. It was mostly about exploring, taking in the sights (of which there were many, Ashes of Creation is very pretty), and getting a feel for the game’s combat and skill system.

Everything in this regard was limited for Alpha-1. I could pick between four races and three classes, and level them as high as level 15. I played as the Tank, but with everything subject to change, and everything being limited for now, there’s really not too much I could non-confidentially say at this juncture.

Ashes of Creation uses hotbar skills and is a bit slower and measured compared to more modern, action-focused MMORPGs. For me, I prefer things to be slower. I like being able to put some thought into my actions, instead of memorizing a rotation and “dance” steps.

It’s too early to say, though, which direction Ashes of Creation will ultimately go in once all the skills are unlocked and players start to optimize strategies, but the potential for a thoughtful and strategic combat system is there, especially when you consider there will eventually be 64 possible class combinations.

Overall, even in such an early stage, I feel encouraged by what Ashes of Creation has shown so far in Alpha-1. There’s a clear, promising foundation here that Intrepid can continue to polish and build more complex layers on.

Progress on the basics such as having an interesting and beautiful game world, and a combat system that is fun and functional, are looking good so far. If developers can continue to build all of that up, while also living up to its promises of extreme player agency, then I don’t see why Ashes of Creation can’t live up to the hype when the final product eventually comes together.