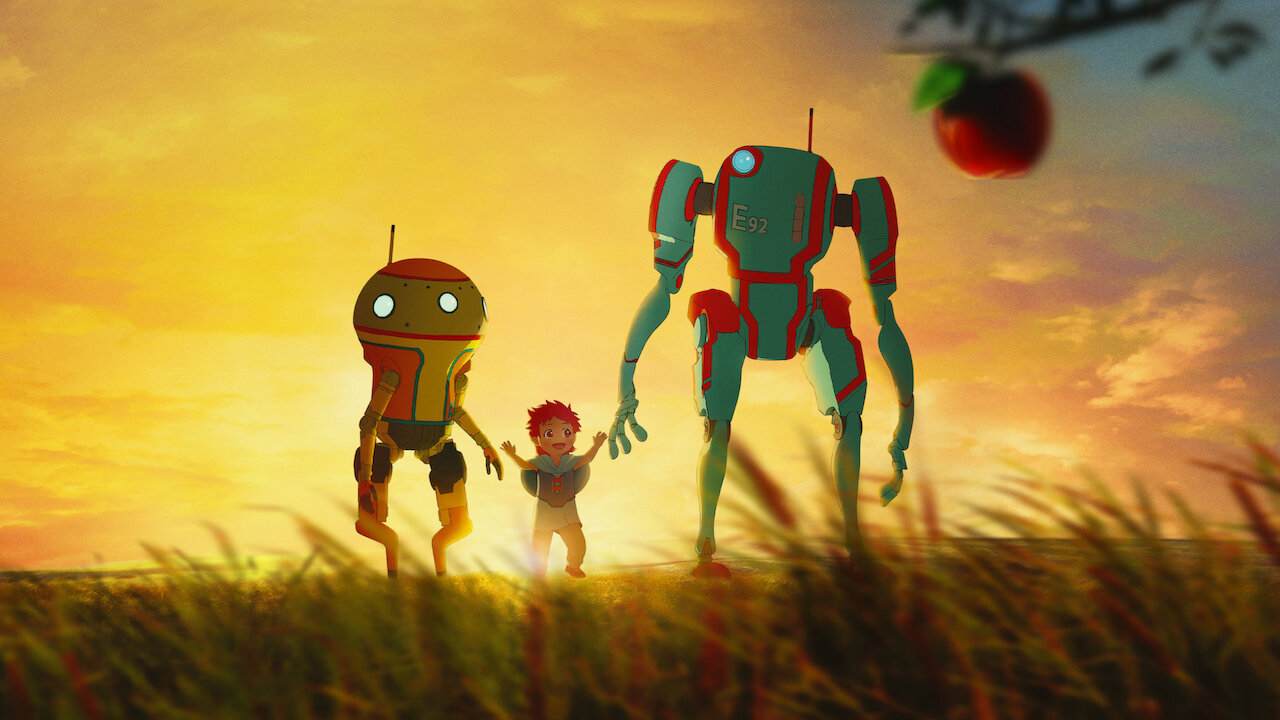 Over the last few years, Netflix has slowly but surely been carving out its own niche for original anime, finding plenty of success with multi-season formatted shows like Castlevania. But while this has most definitely been great, there hasn’t really been a series that has left a lasting impact on me yet, as many suffered from issues like poor pacing and plot stretching. All of that changed with Eden.

As the name suggests, Eden centers around a perfect futuristic world rife with vegetation and life. Pollution and strife are essentially nowhere to be found. The catch is that the sole inhabitants of this world are artificial robots whose human creators vanished long ago.

Despite the lack of a human presence, these robots go about their daily lives as usual, collecting produce and maintaining the many habitats that make up their world. One day though, two of these machines, E92 and A37, stumble on a baby human named Sarah who has been kept alive in a special pod.

From then on out, these two machines evolve and grow alongside the child, with each side learning the ways of the other. Sarah gets these quirky robot tendencies in her verbiage and actions, while the machines around her also try to learn how to manage her human emotions and even understand some of their own.

Their dynamic is honestly adorable, as they already seem like an established family thanks to the time skip that occurs partway through episode one. I especially loved how Sarah always called E92 and A37 mom and dad, despite the fact that they’re robots.

The concept alone of the last human alive being raised by robots is such a fascinating concept that hasn’t really been explored, at least when it comes to anime. Eden’s biggest accomplishment, though, is how quickly it establishes everything.

It only took one episode for me to be invested in this odd family, and the world and mysteries the series presented. Mere moments into Eden, I was already asking plenty of questions: Did the robots kill all of the humans? Did the humans cause an apocalypse that only machines could live through? Why is there a baby in a pod?

By the time the season ends, all of those questions are answered concisely and interestingly, and the show actually gets a closed-off ending. While this is mostly because Eden is only four 25 minute episodes, that doesn’t take away from the fact that it was able to accomplish this feat. If anything, it gives it even more weight through the sheer fact that it chose to do this.

Nowadays, most anime, including Netflix originals, have taught us that a few short episodes simply isn’t enough time to establish a world and tell a story. That isn’t to say we haven’t seen short seasons. Castlevania started off with only four episodes itself, but that was more of a test to see if fans liked it. When they did, more episodes and runtime were allocated to it in order to tell the story properly and capitalize on its popularity.

This resulted in more characters and plotlines that ended up diluting and dragging out the story I fell in love with in season one. If Castlevania had stuck to a shorter format, the show would definitely have felt more focused and digestible.

That is exactly what Eden did. The show stuck to its guns with its short format, delivering a more meaningful and heartfelt story as a result. Even though I only spent a little over an hour with Sarah, E92, A37, and all the other robots, I still felt more of a connection with them than I ever did with any character across Castlevania’s 32 episodes.

It literally only took three episodes for Eden to make me cry like a baby. That is how good the show was at telling an emotional story in such a short and sweet timeframe.

And sure, it doesn’t have an Attack on Titan level of depth and storytelling, but that doesn’t mean these types of short-formed anime don’t have their place in the medium. I think that Netflix needs to create more short and sweet anime like this, as it is a great way to tell a story without exhausting viewers and rehashing the same thing over and over again.