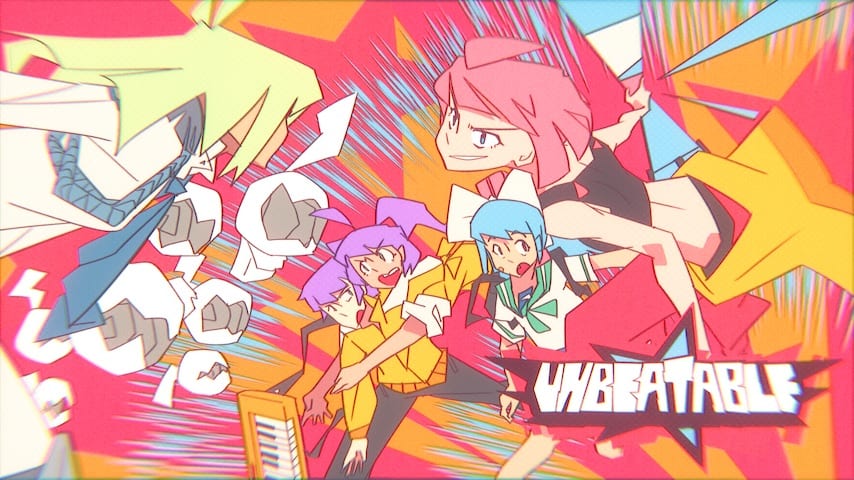 It only took indie developer D-Cells 15 hours to fully fund their upcoming music title, Unbeatable, on Kickstarter, as they demolished their goal of $55,000. And honestly, it isn’t hard to see why the game got funded so quickly, as the two-button rhythm game looks stylish and addictive.

In this indie, players control Beat, a pink-haired musician that finds herself tangled amidst a web of mysteries. To get things back to normal, she must come up with a setlist for an upcoming show that’ll turn this world upside down, hopefully making music legal once again.

D-Cells describe the game on their Kickstarter as half exploration and half arcade action:

You”ll explore the game world, meeting terrible people and building a setlist for your upcoming concerts. Helping strangers, practicing with bandmates, and sleeping in all day. The gameplay is arcade-flawless rhythm powered by an entirely original soundtrack. It’s simple but frenetic – sure, there’s only two buttons, but there’s a lot of visual variety to the setpiece-styled battles.

More casual players can also enjoy the dope beats and colorful ambiance that Unbeatable has to offer, as the game features an Assist Mode, as well as other helpful accessibility options.

The first “episode side-story demo,” titled Unbeatable [white label], will be available on Steam Wednesday and will include six songs. The game will continue to be updated in the future, set to feature new story content and beatmaps that will eventually form a complete stand-alone narrative.

For more information, or if you’d like to donate to the game, be sure to head over to Unbeatable’s official Kickstarter page. There you’ll find plenty of cool development information, alongside different tiers you can donate to.