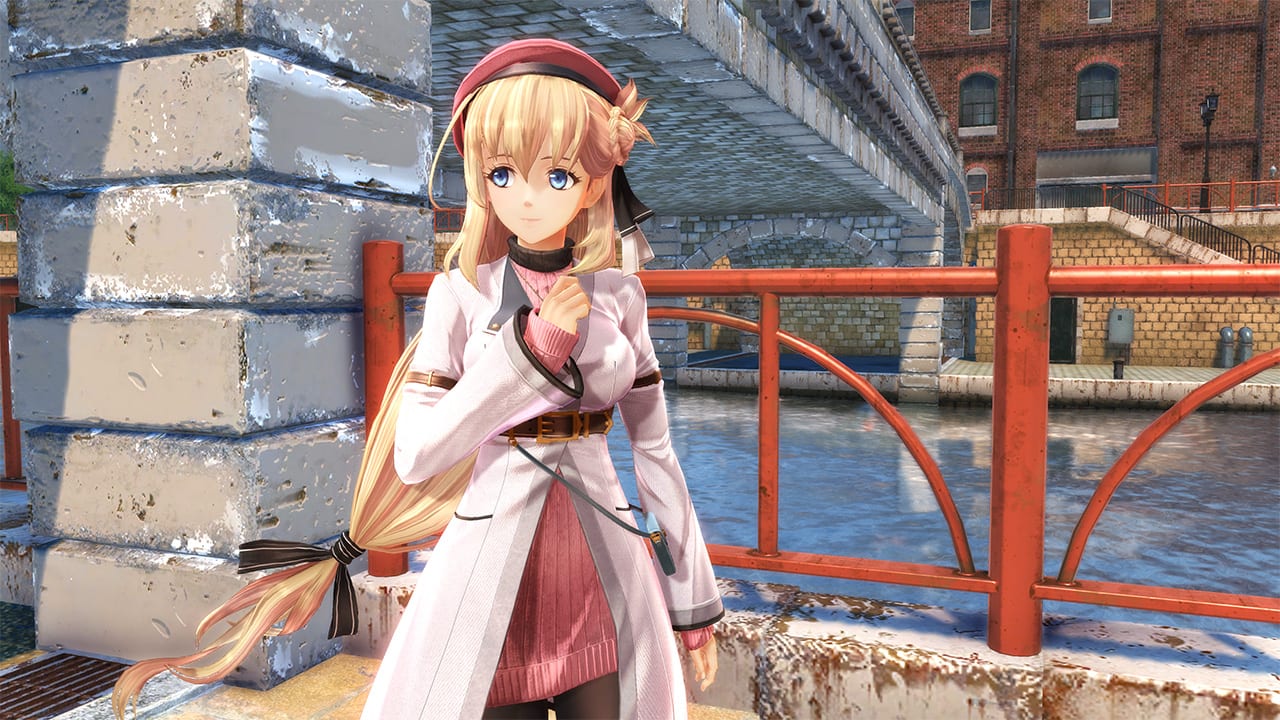 Today Nihon Falcom released a gallery of screenshots the first gameplay, and more details of the upcoming JRPG The Legend of Heroes: Kuro no Kiseki.

First of all, we take a look at the main characters.

Van Arkride is 24 years-old and fights with a sword named “Stun Caliber.”

He’s a young behind-the-scenes problem solver (a profession named “Spriggan”) based in the old district of the capital of the Republic of Calvard, Edith.

He may seem a bit cold and pragmatic, but he has a sense of justice and he is quite good at taking care of others.

Due to his work, he has connections with many in various lines of business and has a wide range of contacts. Yet, he usually refuses to let people see what is truly hidden in his heart.

Although he started this job by accident, he seems to be quite happy with his way of life. Even if his job may seem seedy, he performs it as well as he can.

Agnès Claudel is 16, and she fights with the “Oval Staff.”

She appears sweet and innocent, but behind her cool eyes she hides a strong will. She learned self-defense with a staff as an elective subject in school and she is a member of the student council, spending her carefree days taking care of general issues with her friends.

When she learns that an orbment that belonged to her great-grandfather has been stolen, she doesn’t go to the police, but instead resorts to contacting Van’s “Arkride Solution Office.”

Below you can watch a brief video showing her in combat.

Next is Feri Al-Fayed, 13 years-old. She fights with an “Assault Bayonet.”

She is a petite girl belonging to the warrior tribe named Kurga. She has been fully trained for combat since her childhood and while she shows her tough side while hunting, she seems to be insecure within the city walls. In her daily life, she shows honest reactions like a girl her age.

When she learn that a hunting party has disappeared, she leaves on her own to search for them while trying to contact the Republic’s problem solver she has heard about.

Check her out in action below.

Aaron Wei is 19 and his weapon is the “Twin Fencer.”

He’s the leader of a gang of violent youngsters and he trained at one of the three largest martial arts schools. He has an unpredictable yet charismatic personality and can do things like performing a female sword dancing role in an opera or raiding a casino on a whim.

The Black Moon (Heiyue) syndicate is trying to get him to be the leader, but he doesn’t seem to be very interested in that organization.

The Legend of Heroes: Kuro no Kiseki is set in the republic of Calvard, one of the largest nations of the continent, located in its mid-western area.

Originally, it was a monarchy, but a democratic revolution a hundred years ago marked the passage to a republican system.

It has been locked in years of bloody war with Erebonia over Crosbell, but now Crossbell has become independent and doesn’t pay tribute to Calvard anymore. That being said, the Republic is enjoying an unprecedented economic boom due to the massive reparations received from the Empire and is becoming the continent’s most powerful nation both economically and militarily.

Its capital is Edith, which is one of the largest megacities of the continent. Among its locations, you can find Revolution Square set between the 90-years-old Presidential Palace and the Republican Capitol, a prestigious high school that trains elite students, a commercial district on the riverside with its white clove trees, and the old town, that has not enjoyed the same development as the rest of the city.

The streets are used by a wide variety of vehicles, and the country was the first to introduce traffic lights. It was also also the first city to build a subway system to connect its districts instead of street car network.

The Spriggans are behind-the-scenes problem solvers born of the crucible of diversity that is the Republic of Calvard.

At times they work as detectives, at times as negotiators, and at times as bounty hunters, taking any and all requests.

As official investigations are handled by the police and the guild of Rangers, the only jobs that come their way are cases that the CID (Central Intelligence Department) doesn’t want to send to the guild, requests from citizens that require discreet solutions, and semi-lawful requests from criminals and underground organizations.

The battle system has changed since previous The Legend of Heroes games. Now it seamlessly transitions between action battles on the field and turn-based battles, allowing players to enjoy both quicker and strategic combat.

When an enemy is spotted on the field, you can initiate an action battle whenever you like, or you can evade and move on.

At any point during an action battle, you can use the tactical orbment Xipha to shift to turn-based combat. If you want to go back to action, you can retreat and restart the process.

In the field, you can perform both combos and strong attacks against the enemies you target. If you’re in a party, you can switch active character at any time.

Enemies will respond in various way, so positioning to avoid damage via evasive actions is important. Each character has different evasion abilities.

While in turn-based mode, you can choose from a variety of commands including normal attacks, arts, and items.

You can take a look at the battle system in the video below, alongside the full gallery showcasing all the elements introduced today.

The Legend of Heroes: Kuro no Kiseki is the next game of the Trails series and has been announced for yet undecided platforms. It will release in Japan in 2021.

No western release has been announced for now (and probably we shouldn’t expect that announcement too soon), but you can also check out the first screenshots and more details.