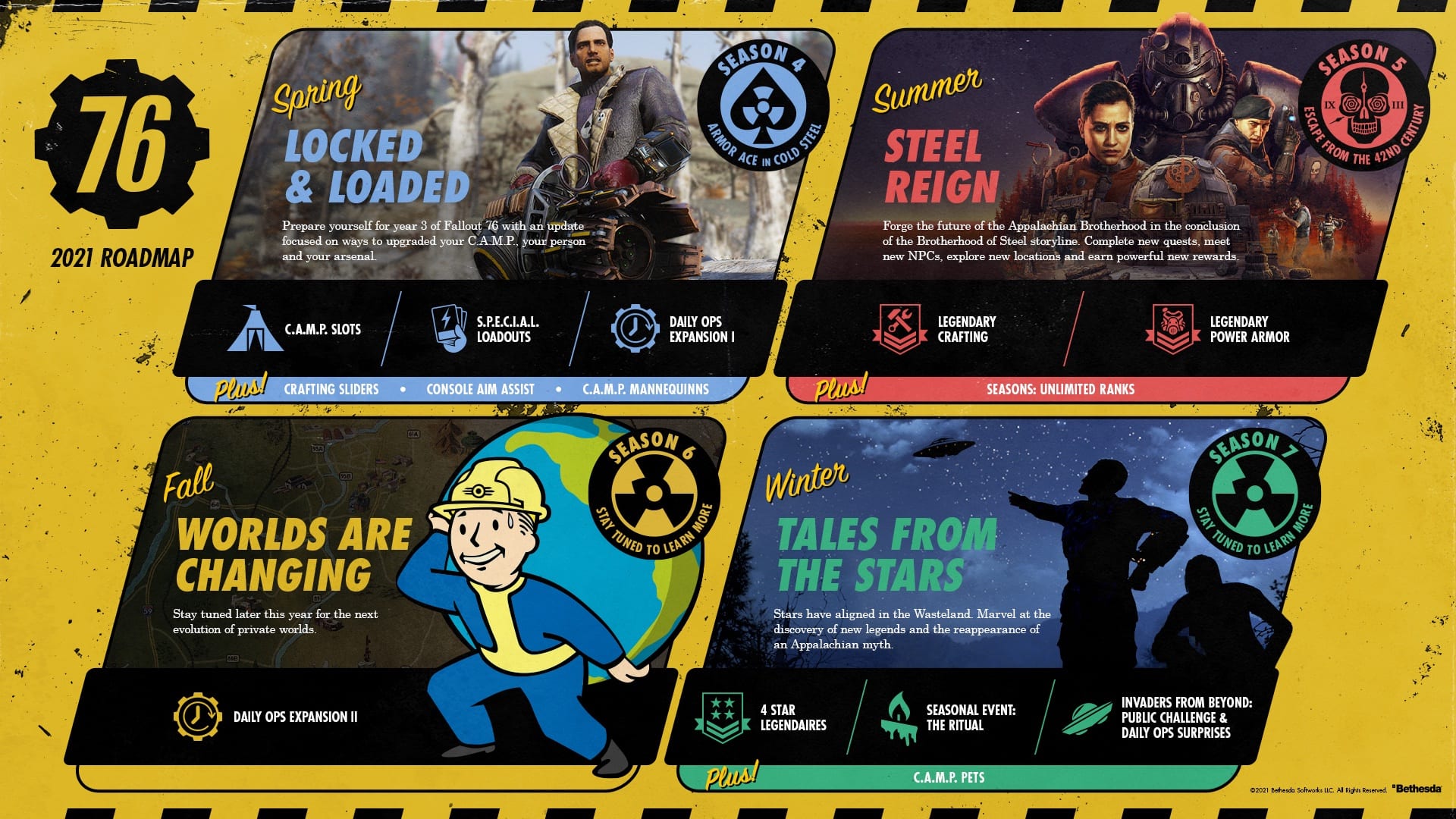 We get new goodies for all seasons, from features already on the public test server, to things that will come all the way in the winter.

SPRING
Get Locked & Loaded with our Spring update! Introducing S.P.E.C.I.A.L. Loadouts, C.A.M.P. Slots, Mannequins, and an all-new Daily Ops expansion, this update is just loaded with new features to explore! For a deeper look at the new features, check out the Inside the Vault article here. Can’t wait to see these new features for yourself? Players who own Fallout 76 on the Bethesda.net launcher can test out all these new features and more in our current iteration of the PTS right now.
Additionally, we hope you haven’t packed away all your snow gear just yet as Armor Ace returns, this time in a fierce battle against battling against Commissioner Chaos and the Yukon Five! Season 4 brings all-new rewards to the Scoreboard, from cosmetics, to consumables and everything in-between.

SUMMER
Last year we met The Appalachian Brotherhood of Steel, witnessed a conflict between the ranks and discovered new obstacles in their path. Steel Reign concludes the story of The Brotherhood, introducing all new quests, locations, NPCs, and powerful new rewards. Whose side will you take? Your choices will change the Wasteland.
To survive the Wasteland, you need good gear! This summer, craft specific Legendary items using Legendary modules. Tailor your build to perfect your playstyle.

FALL
The winds of change are coming, and with it an evolution to Private Worlds! Stay tuned to future Inside the Vault articles for more information as we get closer to release.
We’re also bringing another expansion to Daily Ops to bring you even more ways to play.

WINTER
You’re already a legend in the Wasteland but are you truly legendary? Gear up with all new four-star Legendary Weapons and Armor! Then, after you’ve spent a long day out foraging in the Wasteland, come home to your very own C.A.M.P. Pet!

Face off against all new dangers with an all-new out-of-this-world event. Public Challenge: Invaders from Beyond will unite everyone across the server to complete challenges, face off against all-new foes and earn some stellar new rewards.

The Cultists of Appalachia are up to something sinister in a brand-new Seasonal event: The Ritual! Help the cultists in Point Pleasant prepare an exciting and dangerous ritual, and they’ll repay you with unique rewards.

Fallout 76 is currently available for PS4, Xbox One, and PC, and it just received an FPS boost on Xbox Series S|X.