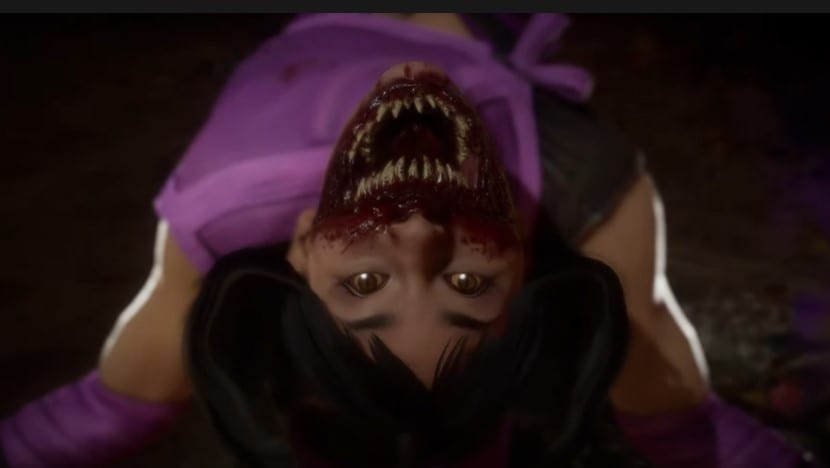 Earlier this morning, the official Mortal Kombat YouTube channel released the first gameplay trailer featuring the franchise veteran, Mileena, in action. The clone of Kitana appears to be just as vicious and sadistic as ever with an equally creepy voice.

The trailer begins with Mileena twisting one of her sai into the eye of an enemy before being interrupted by Kitana. Then the two start going at it and this is the first time we get an extended look at Mileena’s moveset in Mortal Kombat 11.

Of course, her attacks consist of mainly stabs and slashes with her sai along with flips and acrobatic kicks. That might not sound especially brutal for Mortal Kombat, but rest assured, it gets there.

Pretty early on we see Mileena perform a move on Kitana where she uses a sai to stab the opponent in the eye. Then she follows it up with a kick to send them flying considerably far across the stage. It appears unlikely that you could get many follow-ups off of this move.

Another exceptionally brutal move features Mileena taking off her face covering for a bit to lick her enemies. Gross, but not that violent until she immediately bites their neck after and takes out a chunk of flesh at the same time.

One of the more visually impressive moves shown off in the gameplay trailer features Mileena sliding and taking out the feet of an opponent before jumping on them and stabbing them with her sai multiple times.

Right after that Mileena uses a grab that stabs both sai into the enemy’s body. Mileena then turns around to check her nails while sai continue to rain down on the enemy before she finally teleports behind the enemy and kicks them away.

But none of those moves compare to Mileena’s Special Move and her Fatality. During Mileena’s Special, we see her stab Kitana in the gut five times, jump on her back, take a bite out of her neck, throw both sai through the back of Kitana’s head to pierce her eyes, then Mileena rips out her throat.

The Fatality is comparatively tame. Mileena jumps off of Kitana, then starts spinning like a saw blade in the air. She continues spinning towards Kitana until she spins right through her, turning her into a mess of blood and guts.

At the end of it all, we’re treated to a haunting visual of Mileena bent over backward with her mouth wide open and a terrifying look on her face. If Mileena is your jam, then you’ll be able to pick her up as a part of Kombat Pack 2 on Nov. 17 along with Rambo and Rain. Mortal Kombat 11 Ultimate (launching on the same day) will also include Kombat Pack 2.

You can check out the official Mileena gameplay trailer from the Mortal Kombat YouTube channel below.