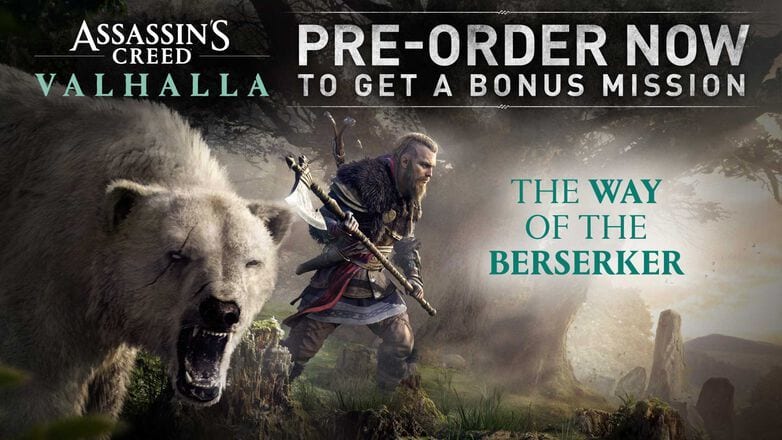 Anyone who preordered Assassin’s Creed Valhalla on any platform will get access to the ‘The Way of the Berserker‘ mission. No further details have been specified on what the mission may entail. But judging by the image below, it looks like you’re gonna be dealing with an angry-lookin’ bear.

Preorder and Ultimate Pack DLC will be automatically downloaded alongside your copy of the game if you’ve purchased the game digitally from the Xbox, PlayStation, or your preferred PC storefront. This means you can load up the game and await the next step.

If you purchased a physical copy of Assassin’s Creed Valhalla, your preorder DLC will likely come as a code on a slip of paper. Your Ultimate Pack code will be inside the box of your physical Ultimate Edition of the game.

After this, select the platform you’re going to be playing on. The site will then provide a code for your specific platform on-screen.

Go to the PlayStation or Xbox Store from your console’s home screen and select the ‘Redeem Code’ option from the left sidebar menu. Enter the code as shown on the Ubisoft redemption website and you should be able to then confirm you want to redeem the DLC.

Now load up the game. Your Way of the Berserker preorder DLC won’t be available right away, but it will eventually unlock as you progress through the story, so just sit tight on that one.

As for your Berserker items from the Ultimate Pack, you’ll also need to wait until you’ve at least reached England and have set up your first settlement. At this point, you should then have access to your runes and Berserker settlement, longship, and gear packs.

There you have everything you need to know on redeeming your bonus DLC in Assassin’s Creed Valhalla. For more tips and tricks, head over to our guide wiki or have a browse below.