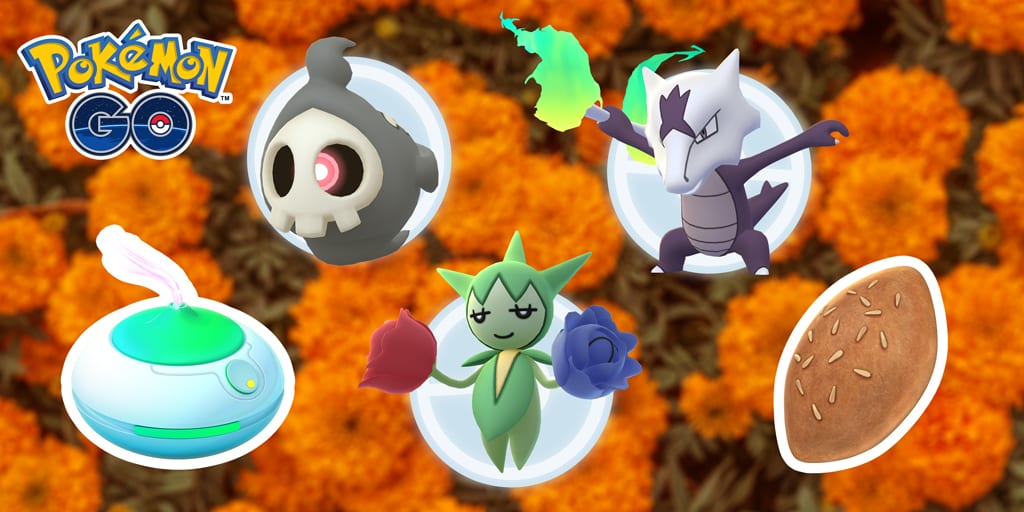 Earlier this month, Niantic revealed all the details about their Halloween event. And earlier today, they announced a bunch of details on the Day of the Dead-themed event in Pokemon GO.

If you love the Halloween event every year and can’t get enough Ghost-type Pokemon, then this is the perfect continuation of that. It’s technically a different event that runs from Nov. 1 at 11 AM until Nov. 2 at 11:59 PM local time.

The Day of the Dead and Halloween events will both see a surge in Ghost-types like Duskull and Litwick appearing in the wild. However, Cubone, Sunflora, Roselia, and Cacnea will also be more common during this time as well. But it looks like there won’t be any changes to eggs or raids.

If you want to get even more Ghost-types, then you can use an Incense to attract more of the following Pokemon: Gastly, Misdreavus, Absol, Shuppet, Duskull, Drifloon, and Litwick.

You’ll even have a chance of encountering shiny versions of Marowak, Alolan Marowak, Murkrow, and Duskull by completing certain Field Research Tasks.

You’ll also be able to stock up on Poffins during this event since they’ll be added to the list of GO Battle League rewards. Or you can just get one from the special box that will be released for the Day of the Dead Pokemon GO event. This bunch of items will also feature Incense, Star Pieces, and Remote Raid Passes.

And just like many other events, they teased a different photobombing Pokemon but didn’t announce who it will be. If you would like to read the official release about the Day of the Dead event in Pokemon GO, you can find it right here.