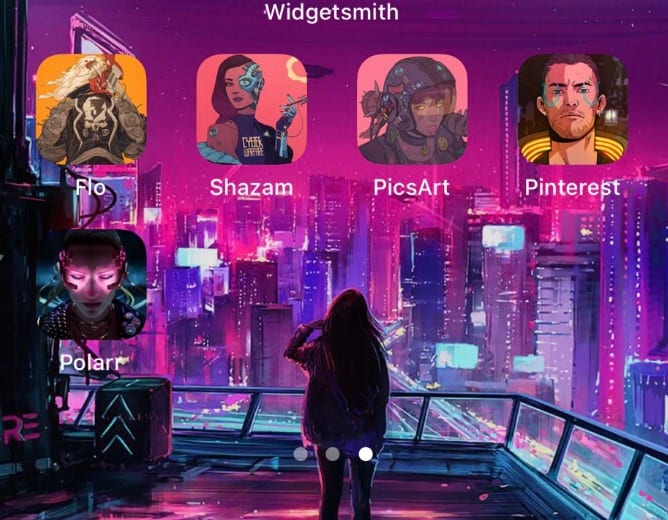 Last week, Apple released iOS 14, the latest software update that allows iPhone users to personalize their home screens in more ways more than they could before. By using widgets and shortcuts, it’s now possible to customize app icons and add pictures and other bits of flair to home screens.

Twitter users have been sharing shiny new home screens themed around video games such as Animal Crossing, Persona 5, Minecraft, Pokemon, and many more.

We’ve compiled 25 of the best gaming-themed iOS 14 home screens that are sure to inspire you to create your own.

This home screen, inspired by The Last of Us Part II, has a dark but clean design. It features various characters from the game, some with widget pictures and some with custom app icons.

If you’ve ever played Animal Crossing: New Horizons and wanted your very own Nook Phone in real life, this is your chance. This home screen is designed to look like the Nook Phones in the game, and even has several of the same icons used.

Here’s another Animal Crossing home screen design. This one has a spring theme with plenty of cherry blossom pictures, and the app icons feature many of this person’s favorite villagers.

Among Us is taking the Internet by storm recently, so this home screen is a perfect celebration of the game. They even matched many of the character colors to the original app colors, like teal for Twitter, purple for Discord, yellow for Snapchat, etc. Green seems a bit sus, though…

We can’t get over how adorable this Kirby home screen theme is. It’s super simple in design with some Kirby pictures as app icons mixed with some other cute, pink things.

Move over, Mario; it’s Luigi’s time to shine. Any fans of Luigi’s Mansion 3 will love this home screen design. It has a black background with simple green app icons along with widget pictures of Luigi himself.

This multi-screen Kingdom Hearts home screen not only shows off watercolor pictures of the characters, but it also has quotes from the game from Axel, Kairi, and Sora. These screens are sure to inspire any Kingdom Hearts fan.

This person created a retro Pokemon style home screen featuring sprites from Leaf Green. It shows off the Pokemon in their party along with some favorites from their PC boxes.

Here’s a modern style Pokemon home screen. This one features the Rotom Pokedex from Pokemon Sword and Shield. The apps along the bottom half look just like the menu screen in the game.

If you’ve ever wanted your phone to look like the Wii console menu, now’s your chance. This person went the extra mile by making their lock screen look like the “Warning-Health and Safety” screen that appears when you turn on the Wii, and the home screen apps look like games on the menu.

This multi-screen home screen has a minimalist look to it with characters from GTA V. Everything is neatly separated into categories with corresponding app icons.

Minecraft is still as popular as ever. This person used sprites of items and characters from the game to decorate her home screen, and she even included health and hunger meters at the top.

Here’s another Minecraft inspired home screen. This one uses things like materials, enemies, and animals from the game as app icons. It even has cute flowers and bees at the bottom.

The Legend of Zelda

If you’re like us, you’re probably getting desperate for any news about the sequel to the Legend of Zelda: Breath of the Wild. This person got creative by using images from the teaser trailer to decorate their home screen.

Persona fans will love this home screen that is inspired by Persona 5. It features app icons of characters and images from the game with a nice black and red color theme.

This home screen is inspired by Undertale. All of the app icons feature characters and enemies, and the widget pictures show off memorable screenshots from the game.

Here’s another Undertale inspired home screen. This one also has characters as the app icons, and the background is designed to look like the battle screen from the game.

This home screen celebrates Super Mario 64 DS. The first screen is designed to look like the game’s menu screen, while the other screens feature images of the mini-games that can be played in that version of the game.

This Stardew Valley inspired home screen is extra creative because not only do they use the games’ items as app icons along with a background image from the game, but it also plays the Stardrop sound clip when the phone is plugged in.

This person expressed her love of Life is Strange by designing a home screen that celebrates the game. The app icons are images that can be found in various places around the game, along with some iconic pictures of Max and Chloe and the “this action will have consequences” message.

Can’t wait for Cyberpunk 2077? This person can’t either, which is why they created a home screen centered around the game and its characters. We love how vibrant and eye-catching it is.

This Sims 3 theme is simple but does a great job of showing off this person’s love of the game. It uses images and icons from the game as widget pictures and app icons, along with the game’s logo.

If you’re feeling adventurous, this Uncharted 4 home screen is sure to inspire you. It features characters from the game along with artifacts, journal drawings, and a pirate skeleton.

This Splatoon 2 inspired home screen is one of the best ones we’ve seen because it looks like it could actually be straight from the game. The colors and app icons are all perfect, showcasing some of the game’s characters, items, and power-ups.

This Fallout themed home screen is incredible because it is designed to make you feel like you’re using a Pip-Boy device from the game. Nearly every icon is customized to be green, and some of them are specifically images from Fallout.

(Credit to @AmandaFiennes_ for the featured image)