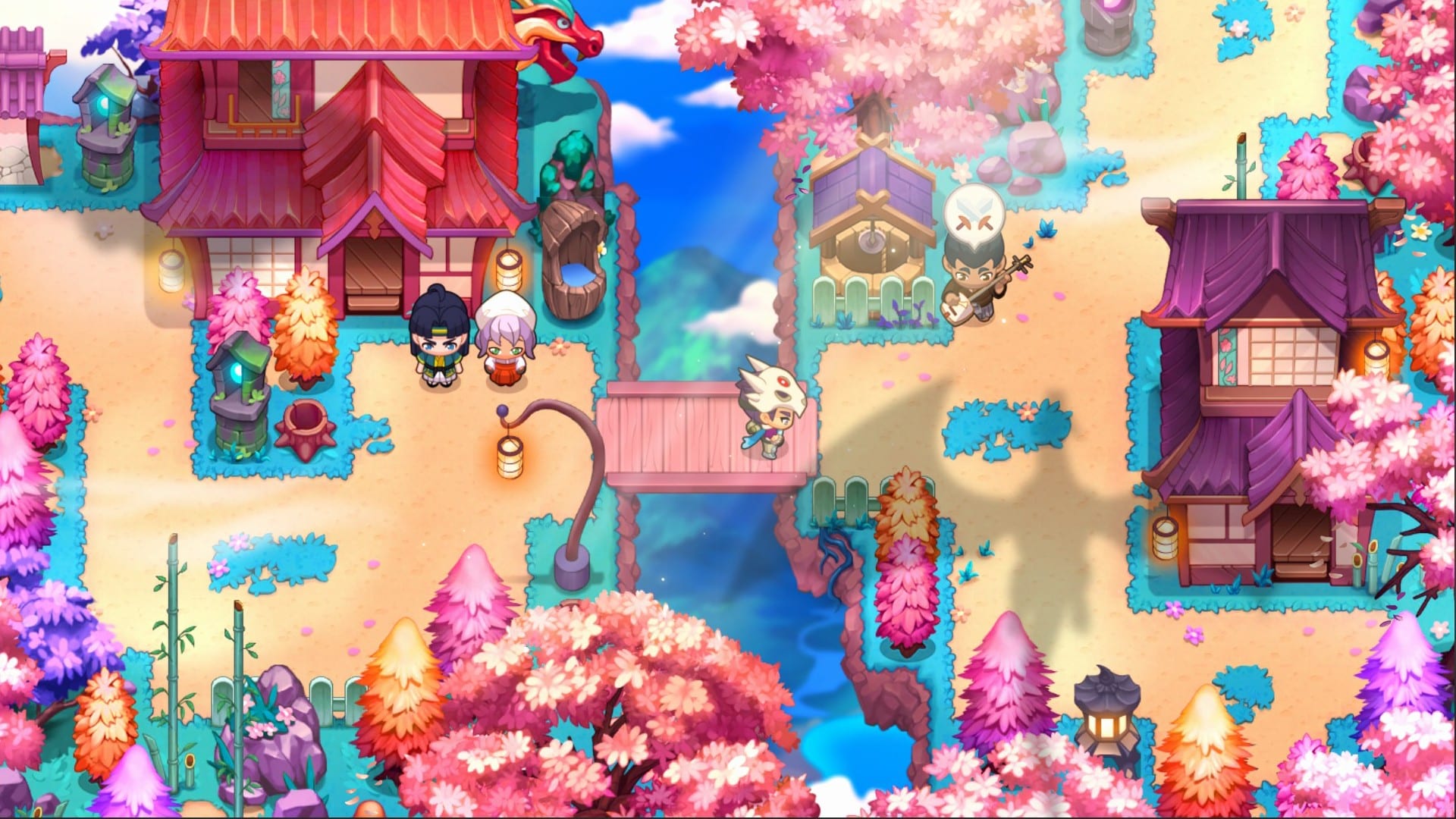 Pokemon for years has been the dominant player in a space that it itself created and popularized in back in the twilight years of the GameBoy. In recent years, though, competitors like TemTem have been trying to entice Pokemon fans over to their take on the popular Pokemon formula. Nexomon: Extinction is one of these “clones” so to speak, that are trying to get people to come for the Pokemon-like gameplay, but stay after coming to appreciate their unique spin on the genre.

Recently, I had an opportunity to speak to developer Jvemon of Vewo Interactive and creator of Nexomon, to ask a few questions I had about Nexomon from the perspective of a hardcore Pokemon fan. You can check out the full Q&A below.

I’d especially recommend that if you’re an long-time fan of Pokemon that loves the games, but are perhaps a little tired of what Game Freak has been churning out in recent years, give this interview a read and see if maybe Nexomon is something that appeals to you.

Ed McGlone, Twinfinite: On the surface, Nexomon looks extremely similar to Pokemon, the game it’s obviously inspired by. What are some of the ways that Nexomon will seek to stand out from, and even improve on the Pokemon formula from a gameplay perspective?

Jvemon, creator of Nexomon: There are plenty of features that we’ve explored to make Nexomon stand out in refreshing ways.

Off the top of my head…

With a pickaxe on hand, you’ll find that the world of Nexomon is brimming with gemstones that serve as raw materials for crafting useful things such as Elemental Nexotraps and Cores.

The elemental traps are self-explanatory; Cores, however, are an equipment system. When equipping a party member with Cores, they can have various effects such as boosting specific stats, providing status effect immunity or even increase EXP intake. Higher grade Cores require more materials, so you should venture into the many mines and caves the world has to offer.

Every wild Nexomon has a set of favorite meals that make them much easier to capture. Different cities and locations will have different meals for sale, so the game encourages you to take a good look at what each place has to offer.

However, “feeding” is not a major requirement to catch a Nexomon. This feature only exists to reward players who took the time to be prepared, but not to punish players who prefer a more traditional capture flow.

Sidequests! The wonderful world of Nexomon is actually quite demanding! You’ll always find someone in need of a hand and, oftentimes, there will be characters wanting to trade rare items with you. We think that players will appreciate how alive the game can feel sometimes.

One gameplay “feature” is the fact that a large portion of the world is readily accessible early on. It implies that you sort of get to build your ideal team almost from the get-go. After some introductory scenes you can already visit a desert, the Frozen Tundra, some haunted woods, a beach and even Drake Isles before continuing with the main plot.

As you progress, you’ll also unlock various “environment mechanics” that involve burning plants, jumping long distances, crushing rocks and whatnot. This is similar to Pokemon’s HMs, but not quite. We’ll be elaborating on that later on.

Ed: How many types are there in Nexomon, and what was the approach for making sure types were balanced properly?

Jvemon: There are nine elements in Nexomon. And for each type there’s a set of dragons.

Regarding balancing the elements, this is where the semi open-world aspect of the game shines: this kind of freedom ensures that players always have options to be prepared. There is always a location you can visit –early on– that will provide you with whatever elemental Nexomon you want or need.

Early in the game you may have to venture into a volcanic region. Some of the bosses there can be frustratingly challenging to beat, but in hindsight nothing was stopping you from visiting the Frozen Tundra or Palmaya to gather water-type monsters, or the nearby desert for mineral-types.

We are working towards making Nexomon a game that rewards exploration.

Jvemon: We are confident that the plot featured in Nexomon is refreshingly untypical. You may start off with a seemingly cliché premise of “becoming a tamer,” but within the first couple minutes players will realize that they are in for a delightfully unique and sometimes bizarre journey.

That’s not to say that powerful tamers won’t stand in your way, but rest assured that they will be the least of your (many) concerns.

Ed: Pokemon games are designed to be for all ages and while that casts a wide net, experienced players sometimes feel like the games are too easy now. What are some of the ways that Nexomon will attempt to please all crowds when it comes to difficulty?

Jvemon: Overall, we believe that the game is challenging out of the box. It is easy to struggle early on when your team isn’t fully built yet, and battles can be short and unforgiving.

While this may please experienced players, we’ve also made sure to provide tools to shape your journey into an easy one: The semi open-world nature of the game allows you to get exactly the type of Nexomon you need to progress through the story.

Grab a pickaxe, mine materials, and craft Cores! They will give you an edge in battles, because many enemies don’t often equip Cores themselves.

If you’re the sort of player who prefers to grind, at least do it efficiently.

As you explore, you may find trinkets that can generally enhance the total EXP you receive by a small amount. But you can stack them! Those trinkets are usually owned by NPCs who are willing to trade them with you.

There are Cores that will boost the EXP intake of your Nexomon.

If you’re trying to catch some rarer and stronger breeds of Nexomon to support your team, consider that you can also craft Elemental Nexotraps.

We do find Nexomon to be often challenging, but players have several means to make it easier.

Ed: Pokemon are often inspired by things the designers see in real life. What are some of the inspirations behind the various Nexomon?

Jvemon: Each designer has very different inspirations, some of them prefer to look for real life references like animals and objects and some other like to come up with completely new concepts.

For example, one of our designers is a big fan of mythological creatures, you will see some of these in the game for sure. We don’t really restrict their imagination and pretty much allow anything that fits the aesthetics of the game.

Ed: Can you talk a little bit about how the art and music styles were developed?

Jvemon: The world of Nexomon is rich in its variety of environments, characters and events. We have composed well over one hundred soundtracks just to properly convey the many themes your unique adventure will have.

Our fan base really enjoyed the world of the original Nexomon so we did not want to deviate a lot from the existing style. We basically focused on building a diverse and contrasting world, so it never feels boring to players. Also, with more experience and resources we were able to make the world much more attractive while keeping the essence of Nexomon.

Ed: Are there plans for post-launch support and/or improvements?

Jvemon: We will closely monitor the game’s reception to better understand the kind of content players expect the most in updates.

There’s a myriad of things that could be done, such as additional sidequests, post-game storylines, quality-of-life features, etc… But it’d be unreasonable to tackle all of them at once. We are eager to act on our players’ suggestions.

Ed: What kind of feedback have you received from players so far and how is that guiding your development?

Jvemon: We are active in our Discord server. We don’t consider ourselves experts in the genre, and as such we put special trust in our players’ feedback. Most recently we’ve discussed how important it is to have “alternate” versions of Nexomon.

It was not a feature we intended to have in the game originally, because frankly it didn’t seem especially fun to find a slightly-different-looking Nexomon. However, players have been quite vocal in how much they’d like that, and as such we’re making it happen in a Day One patch.

Join our Discord server and help us shape the future of Nexomon!

Ed: Are there any plans for multiplayer gameplay in any way?

Jvemon: We are completely open to the idea. However, it will really depend on the game’s reception and player base size.

The resources and number of players required to make a compelling multiplayer experience are high, so we decided to use our limited resources to focus on the story which is the strongest aspect of the game and arguably what made our existing fanbase love the Nexomon world in the first place.

Nexomon: Extinction will release on Aug. 28 for PS4, Xbox One, Switch and PC.