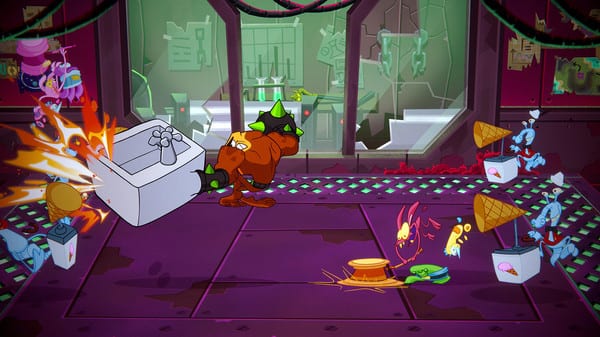 Earlier today, Rare released a new video that went behind the scenes on gameplay with Battletoads director, AJ Grand-Scrutton, as well as a few other members of the development team. The video is just under two minutes long, but we get a few good tidbits of information from the team.

Grand-Scrutton is the first member of the team to mention in this video that they are trying to do something new in the 2D brawler genre. Technical Director, Ben Waring, revealed, “We had an idea when we started creating it that we didn’t wanna just reboot the old combat style.”

Waring also talked about how the whole team loved brawlers of the past, but they wanted to add, “…something more.” Waring continued to talk about how the team was playing games that focus on moving through space. Their goal is to get that feeling into a 2D brawler.

It’ll be interesting to see how this approach will possibly freshen up a genre that has been mostly unchanged for decades.

Lead Designer, Paul Collins, goes into detail on how the different characters play.

Pimple is this kind of bigger brute character … He’s a bit more methodical when he punches … and his moves where he turns into a gorilla, it feels like his moveset has kind of been catered around his style and his personality.

Collins then contrasts this with how Zits plays.

…Zits is a lot more nippy and quick and he can zip around. And he uses tech gadgets to kind of … fight characters.

Grand-Scrutton comes back around at the end of the video to talk about how the game has 11 different modes and 30 minutes of animated cartoon scenes.

You can pick up Battletoads for Xbox One and PC on Aug. 20.

If you would like to check out the full Battletoads behind the scenes video, you can find it below.