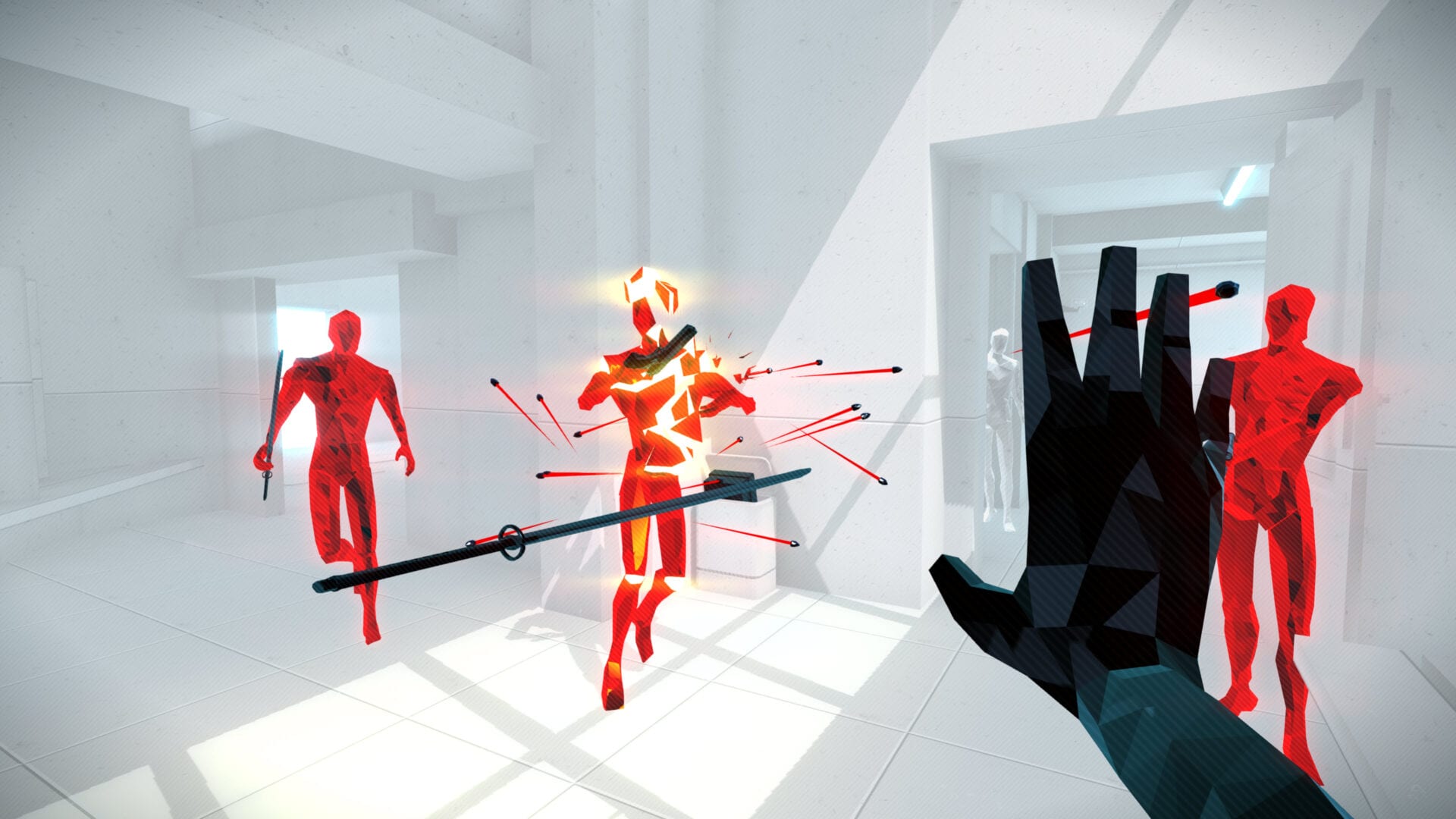 When I reviewed SUPERHOT back in 2016, I was enamored with its compelling gameplay, but moreso with the mystery of its world. The sinister nature of the SUPERHOT executable running on the computer. The implications of my character’s actions in the game within the game’s real-world. Oh, and the giant flashing words across my screen that repeatedly reminded me the name of the game I was playing. Oh right, it was SUPER. HOT.

Skip forward four years and SUPERHOT: Mind Control Delete has come to give fans the ‘MORE’ that they wanted. More levels. More lore. More weapons. More enemy types. More of just about everything you could conceivably want from the time-warping slow-mo shooter.

For those not familiar with SUPERHOT, let me give you a quick rundown. In SUPERHOT, time moves only when you do. You have to use this mechanic to your advantage, shooting not where your enemies are, but where they’re going to be.

You need to constantly be keeping an eye out for enemy fire making its way towards you with striking red lines trailing the bullet, all against the minimalist white canvas of each level. Defeat enough enemies without dying and you’ll advance to the next level.

In SUPERHOT: Mind Control Delete, a few twists have been added in. A roguelike element has been implemented, giving players a number of lives to complete a ‘node’ which is comprised of five or more separate slow-mo combat scenarios. Lose your lives and you’ll have to return to the beginning of the node and grind those levels out all over again. One of the drawbacks with the original title was how easy it was to breeze through the few levels that were there.

Thanks to the adoption of this roguelike approach to level progression, Mind Control Delete ramps up the challenge. So much so it can almost feel too much.

Towards the end of the game, you’ll need to complete 12 different levels with three lives, and few opportunities to recover these lives between them. The more you fail, the easier it is to try and rush through each level, but in doing so you’ll only fail more. It’s all about embracing the slow-mo. Going against it will only result in you performing worse.

Continue to experiment and adopt different approaches and you’ll eventually emerge victorious, and the sense of satisfaction is compelling in itself.

To help balance the playing field, Mind Control Delete does introduce Cores and Hacks. Cores are major game-changing abilities, such as having more hearts, being able to charge your enemy from a distance and hit them, recalling your samurai sword after you’ve thrown it, and switching bodies with a targeted enemy.

Hacks are temporary buffs you can earn as you progress through a node and can simply restore your health or further enhance your core’s ability. For example, one hack plays into your ‘core’ ability to recall your samurai sword, bouncing between (and eliminating in the process) enemies on its way back to your hand.

You’ll gravitate towards some cores and hacks more than others depending on your playstyle, but more often than not, switching to a different core or utilizing different hacks on a node you’ve been struggling on can be the key to beating it.

It’s a good thing, then, that all of these cores and hacks are darn good fun to use and only further improve the core SUPERHOT experience. The slow-mo carnage is scintillatingly satisfying and watching your insane combos unfold in a real-time replay at the end only helps to make you feel like John Wick in… well just about any scene across the three films.

‘MORE’ is the word of the day in Mind Control Delete, with even its achievements poking fun at fan requests for ‘more’ SUPERHOT. That’s what it delivers, with enough content to keep me occupied for nearly four times as long as the original game.

It adds more lore into the game, too, though some may find this to be too vague for their tastes. If you enjoyed the eerie, uncomfortable feeling of the original title, though, you’ll enjoy what’s on offer here.

That being said, upon completing the game and the credits running in a typically SUPERHOT fashion, I did hit an eight-hour loading screen. Yes, you read that right. Eight hours.

Anyway, after patiently sitting through the eights hours — or doing something else in the meantime like a normal person — you’ll be free to replay all of Mind Control Delete to your heart’s content.

Tying into the eerie story are three unique enemy types. Unlike the incredibly fragile red glassed enemies you’re used to shooting, these cannot be killed.

They’ll invade a level and won’t cease trying to wipe out your lives until you beat the level. Each one has its own unique ability, akin to the cores that players obtain throughout the course of the game. These add another layer of complexity to the combat.

Imagine it, you’re trying to line up a shot to defeat a distant enemy. You have an enemy right next to you about to slice you through the head with a sword and incoming bullets to worry about, you also need to make sure you’re keeping your distance and out of line of fire of these ‘boss enemies.’

Time might be moving incredibly slowly in Mind Control Delete, but your mind will be going a mile a minute to ensure those reassuring words are emblazoned across your screen in success. SUPER. HOT.

On top of these three ‘boss’ enemies are more that help mix up the action. Spiky red glass enemies shatter into bullets when shot or destroyed, dealing damage to both you and other enemies. Meanwhile, white mannequin-style enemies with small amounts of red can only be destroyed when these areas of color are targeted.

Both of these add an additional factor to take into account as you’re busy shattering enemies to pieces and cause you to take more time lining up a shot or working out your strategy. Time which, albeit passing slowly, can still feel very limited when the action really gets going.

To top the whole thing off, Mind Control Delete also includes a couple of Endless modes where players can test their combat skills and see how long they can last with a never-ending onslaught of enemies coming at them. As someone who doesn’t tend to go high-score chasing, I only dabbled in these, but they’re sure to keep the competition alive in the community and among friends.

SUPERHOT: Mind Control Delete feels like the full-length vision of the concept that was the original game. With more abilities, enemy types, levels, and lore, this is one of the easiest games to recommend for fans of the original.