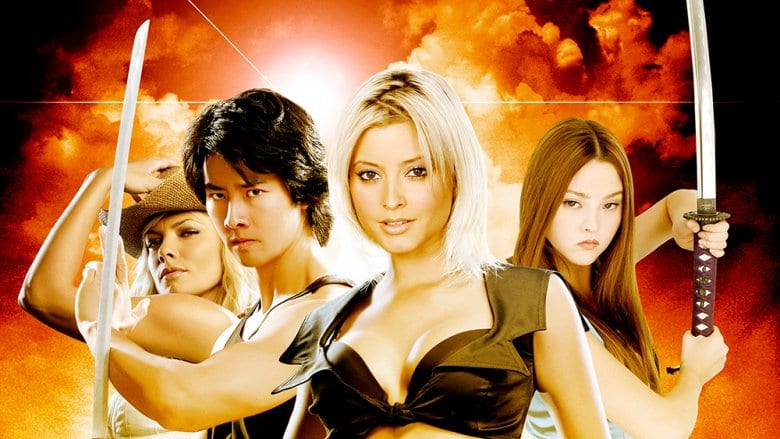 From its inception back in 1996, Dead or Alive has been striving to be seen as a credible challenger against the Street Fighters and Tekkens of the world. Originally dismissed as shameless fan service more concerned with its boobies than its gameplay, it has gradually clawed its way towards acknowledgment as a solid entry in the fighting game genre… with boobies!

It has seen its highs and lows, of course, but perhaps none were more cavernous than its first (and hopefully last) foray onto the silver screen.

DOA: Dead or Alive marked the ten-year anniversary of the franchise, and it was about as offensively bad as video game movies come. You may claim that House of the Dead still holds that dubious distinction, but I doth protest — DOA is more malignant than ten Houses of the Dead. It’s a veritable Township of the Dead, dammit!

…Plus I’m not as fearful that Corey Yuen will want to fight me in a boxing match, so I feel like I can get away with taking shots at it.

Admittedly, I haven’t watched this movie since it first sleazed its way to theaters fourteen years ago, so in the interest of fair play, I chose to give it a second lease on life in 2020.

Maybe 2006 Tony was a harsher critic? Perhaps he earnestly believed that a movie based on a game lauded for its ‘jiggle physics’ was going to be an instant classic?

It’s hard to say, but it’s easy to watch, in theory, and rediscover exactly what makes this film so woeful.

On paper, the plot is reasonable. Various martial artists gather on an isolated island in order to participate in a tournament run by a mysterious collective with ulterior motives. Sure, it’s pretty much the exact same premise as Mortal Kombat, but it at least sounds like it could be Dead or Alive.

That said, it would have really benefitted from an animatronic Goro getting punched in the balls by Linden Ashby.

Any competitor not involved in this montage will never prove to be important. Sorry Gen Fu fans, his sexy fighting scene was sadly cut for time.

The rules of DOA are ill-defined, with contests taking place whenever the wicked Donovan feels like it. He schedules an impromptu match between Kasumi and dastardly blonde behemoth Leon, the latter taking it upon himself to invade her boudoir and begin the fight.

Had she been using the bathroom at the time, she would have been at a clear disadvantage. Equally, she may have just been carrying a kitchen knife at the time and proceeded to stab her opponent violently. What if she just wasn’t there at all? Would he politely await her return?

What I’m trying to say is, this spontaneity does not make for more compelling storytelling. It just makes me more bewildered and upset.

At about the midway mark, a beach volleyball contest breaks out, and yet, it’s actually one of the most faithful scenes. This is Dead or Alive, after all.

In the climax, Donovan’s master plan is revealed, and it is to steal all of the good fighters’ very good fighting in order to become the goodest fighter. He uses a pair of sunglasses to put this scheme into action, which is obviously a foolproof and not at all fragile medium for evil multimillion dollar technology.

He’s foiled in a predictable fashion, the day is saved, and a most wonderful realization enters your mind: DOA has finished, your suffering is over.

So all of these years later, what did I think? Let’s be kind, first.

DOA understands fundamentally what it’s supposed to be, and it had an unenviable job trying to reign in all of the franchise’s dynamic personalities.

One thing I did appreciate upon this viewing was the fighting. It may sound like a backhanded compliment to praise the stupid action, however it was stupid action implemented well.

It pales in comparison to even below average Hong Kong choreography, but it’s definitely not boring. If all they ever set out to do when making DOA was to ensure that it was not dull, then dammit, they succeeded.

…That’s about as far as the positives go, and it wasn’t exactly a glowing endorsement to begin with.

As someone who has been playing Dead or Alive since I first received a PlayStation demo disc at the tender age of 10, I’ve become quite familiar with these characters. Seeing them portrayed in such a disingenuous fashion really bothers me.

To be blunt, I take exception to practically every casting choice in this movie. Each character comes across as if the writers glanced at a piece of paper with two sentences worth of description, then kind of made it up from there.

Devon Aoki’s Kasumi is standoffish and cold, Jaime Pressly is merely serviceable as Tina, and Natassia Malthe looks like an Ayane cosplayer who happened to wander on set before deciding that she may as well fight Kasumi while she’s there.

The casting is obvious and yet somehow forced all at once, whereas I feel like you could have assembled a roster of less recognizable names to greater effect.

Just off the top of my head, Chiaki Kuriyama as Kasumi. Trish Stratus as Tina. Literally not having Ayane in the movie instead of Natassia freakin’ Malthe.

Other characters don’t bother with cursory attempts at accuracy. Helena has gone from opera singing aristocrat to vapid skating bimbo, making her an even less genuine representation of her video game counterpart than Max, who isn’t in the video games.

And my girl Leifang? Reduced to brief flashes before being ruthlessly murdered by a vengeful old man (who is, in all fairness, fighting for the life of his granddaughter). The story modes of the DOA games are guilty of the same kind of disinterest for peripheral fighters, but bae was flung from a damned scaffold here, man. An eager crowd of bystanders cheered. It felt like a personal affront.

At the very least, Robin Shou as a pirate is inspired. The film is practically worth it for his cameo alone.

We’ve come a long way, with movies like Sonic the Hedgehog and the incredibly delightful Detective Pikachu now doing the rounds. DOA, on the other hand, treats its characters with the kind of respect a two-year-old handles a coloring book, disregarding the framework entirely and scrawling over the whole damned page.

I hate it, I hate myself for choosing to watch it again, and — nothing personal — I hate you just a little bit for having read this far. Consider this my self-flagellation for whatever horrible sins I committed in a previous life.