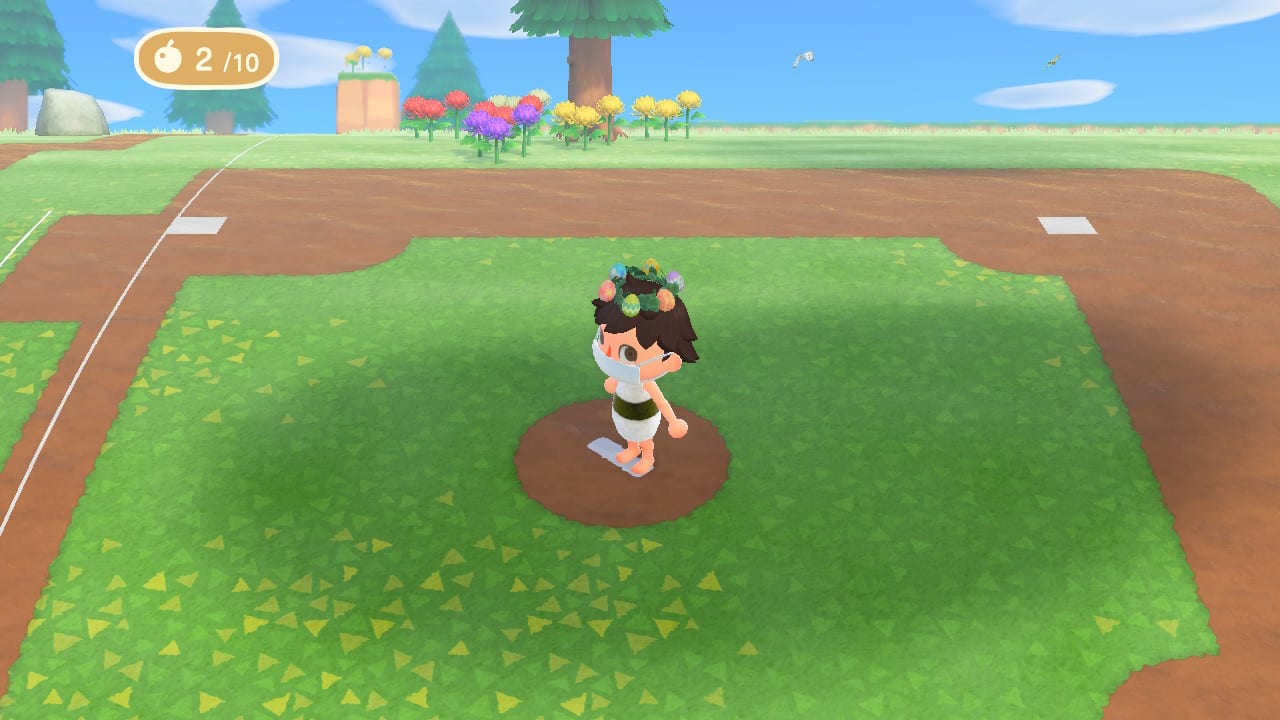 Animal Crossing: New Horizons gives you numerous tools that can help you recreate just about anything you set your mind to. In the world’s current state of social distancing, it can be therapeutic to build structures such as a baseball stadium in Animal Crossing that remind you of the things you love.

I’m glad that we’re slowly but surely going to beat this virus. Yet, I still miss professional baseball. The crack of the bat, the roar of the crowd, the smoky scent of brats grilling, and the cold drink that washes it down all coalesce into a perfect summer night at a ballpark.

My original inspiration to create a baseball field was sparked when I saw this tweet from our glorious leader, Yami (she’s Twinfinite’s publisher). I figured it would be a good way to deal with my longing for our national pastime. Looking back, maybe I should have stuck with MLB The Show.

It turns out that building a baseball stadium in Animal Crossing: New Horizons is the final boss of the game. Mini Target Field is coming along nicely so far, but it just takes up so much space and there are so few Twins players on my island to fill it. I do know that Trevor May plays video games. He’s welcome at any time.

Anyway, I reached an unfortunate conclusion by the time I reached the end of my planning phase. The stadium would need to take up a three by three area on the map. That may not sound huge, but most of the customizable ground in Animal Crossing New Horizons is on a four by five grid.

Fortunately, I was able to consolidate it to about two by two. Still, it’s by far the largest feature in my town. Ignoring space, there’s also a massive cost associated with building a structure this large. Just what I’ve accounted for is already over 600 thousand bells and I keep thinking of new additions.

Then there was the massive time sink of planning it out pixel by pixel in MS Paint followed by the actual building process. The time put in so far is clearly paying off since I haven’t run into any major issues yet. But in the end, I question if it will all be worth it.

Soon, there’ll be a completed baseball stadium nestled into the upper right of my island. It’ll be fun to go there and sit in the stands or hang out in the dugout.

That will absolutely be worth the time being put in. I just don’t think this massive structure will do much for boosting my island rating.

At the start of the game, my ultimate goal was to get a five-star island rating as soon as possible, then I got distracted by this project and it has been my main focus since. It might end up looking good but the field itself takes up such a large space and houses no rating-boosting decorations.

If you’re building something that you’re passionate about, you’ll want to get everything just right. Every detail will be meticulously set in place. Not a single line, bench, or defining feature can afford to be askew. If you’re going to use up so much land, then it might as well be perfect.

But don’t let me discourage you from doing a project like this though. If your heart is set, then go for it. Maybe you’re pining for the sights of Stamford Bridge, Emirates Stadium, Fenway Park or Yankee Stadium. I just figure it would be best to know what you’re getting yourself into.