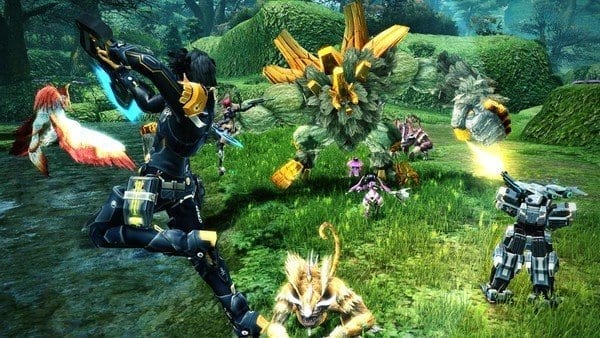 Phantasy Star Online 2 is finally up and running in the west. It has been, uh, way too long since the original Japanese release but better late than never right? If you’re here, you’re probably at the character select screen and wondering which class to pick in PSO2 or what the best class is. Let’s talk about that.

Which Class to Pick in PSO2 – Best Classes

So when you pick a ship and fire up Phantasy Star Online 2’s character creator, towards the end of the process you’ll be able to pick from six starter classes: Hunter, Ranger, Force, Braver, Bouncer and Summoner.

However, these are not all of the classes you can pick from in the game. Not only are there the Successor Classes, but there also other ones you can pick right near the beginning of PSO2 once you complete the prologue mission and return to the Ark social area for the first time. These additional ones are: Fighter, Gunner, and Techer.

Changing your main is very easy in PSO2 and you can do it at anytime from the Class Counter NPC in the Gate area of Ark social area. So if you wanted to pick from those three additional ones, just pick whatever at first, and then after the tutorial prologue go ahead and switch.

As far as which class you should pick, it’s all going to come down to play style.

PSO2 is a very skill-driven game. While yes, loot, skill trees, and race do play a huge part, the most important part is your understanding of how the class attacks and moves around the battlefield, and not getting killed because of your lack of knowledge of how to play properly on the most difficult encounters.

You should pick a class that has a play style that you enjoy, and that you can understand easily.

If you want an easy melee focused class that’s mostly concerned with just getting up close and hacking away, the best classes to pick are Hunter, Fighter, or Bouncer.

Hunters balance attack power with survivability, while Fighters are all out offense. Bouncers are super close-in melee fighters with very high mobility and aerial combos that can also support the team.

Ranged gameplay is also available in PSO 2 of course and if you prefer that, the best classes to go with are the Ranger or the Gunner. The Ranger is a safe class that uses easy to use ranged weapons to deal damage safely from afar, while the Gunner uses a higher skill ceiling but higher power heavy weapons that require some knowledge on how to utilize them properly.

For the fans of mages, the best classes to go with in PSO2 are the Force or the Techer. Force is your old-school blow ’em up, Black Mage type spell caster, while the Techer is a bit more advanced and mixes in healing spells as well.

Everything in PSO2 is a damage dealer, but Techer is probably the closest thing you get to a “healer” in this game, if that’s something you enjoy playing.

Finally there’s the Summoner. Out of the classes you can pick at the start or near the start of PSO2, we would not recommend Summoner. It’s not because it’s bad. In fact, Summoner can be very powerful later on, but it requires you to collect pets that you won’t have at the start of the game.

It also plays so differently to any other class in the game as it’s a very passive style of play and it wouldn’t really help you learn the flow of PSO2 very well if you’re a beginner.

At the time of this writing, still in the early phases of Phantasy Star Online 2, we’re not prepared to rank the classes from best to worst.

We’ll do that once we have a better feeling for the NA meta at the end game. We still don’t know everything about what’s going to be different between Japan and NA updates, and how fast NA will catch up, if at all. We’ll update this post with that info when we can.

In the meantime, hopefully this guide helped you decide which class to pick and which class is best for you to pick at the start of PSO2. For more Phantasy Star Online 2, make sure to search Twinfinite and check out our preliminary guide for basic information if you’re just starting out.