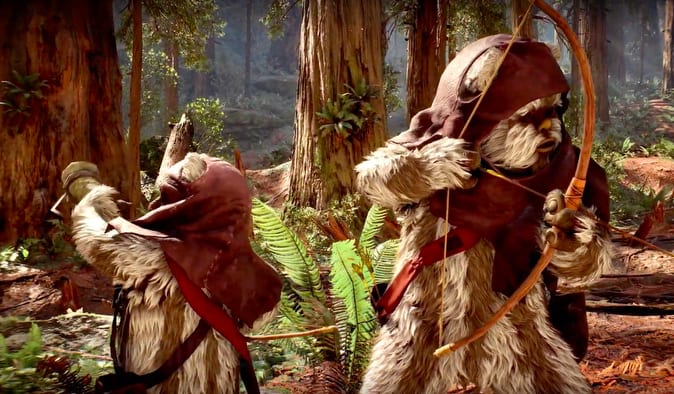 Streamed through YouTube via the official EA Star Wars account in tandem with a post made to the official Battlefront forums, the video shows off all of the new maps, modes and characters players will be able to access once they’ve downloaded the update.

Some of the biggest additions are the two new units players can now select. One is the Ewok Hunter, joining the side of the Rebellion. Nimble and cunning, the unit can buff its attacks with the use of a Valiant Horn, in exchange for giving away its position on the map; stun enemies with swarms of Wisties; and reveal opponents using their Hunter’s Instinct.

The other is the ISB Agent, a special operative for the Empire. Able to dual wield pistols, the Agent can pepper enemies with blasts before hammering them with a charged blast in quick succession. Not only that, but thanks to their Imperial Intel and Double Your Effort abilities, they can track down enemies’ locations and boost their allies’ abilities respectively.

Also worth noting are the plethora of new maps now available through the update. In addition to seven new locations created for the Co-op modes ranging from Yavin to the Death Star II, the update will also begin making Capital Ship maps from Battlefront II’s Supremacy mode available for play in Co-op.

The first two to be brought over are the Republic Venerator and the Separatist Dreadnaught, with more coming in the near future.

Last but not least, there are a handful of new weapons that will be available for players to unlock and upgrade. These include the E11-D, a mid-range blaster; the DL-18, a short-range blaster pistol; the T-21, a short-range heavy blaster; and the Cycler Rifle, a long-range weapon with high versatility.

It’s a hefty update to say the least, and fans of the game will want to view the community update video for themselves down below to ensure they don’t miss a single detail.

Star Wars Battlefront II is currently available on PlayStation 4, Xbox One and PC. For more on the game, check out our coverage of the recent mod which added the Mandalorian into the game.