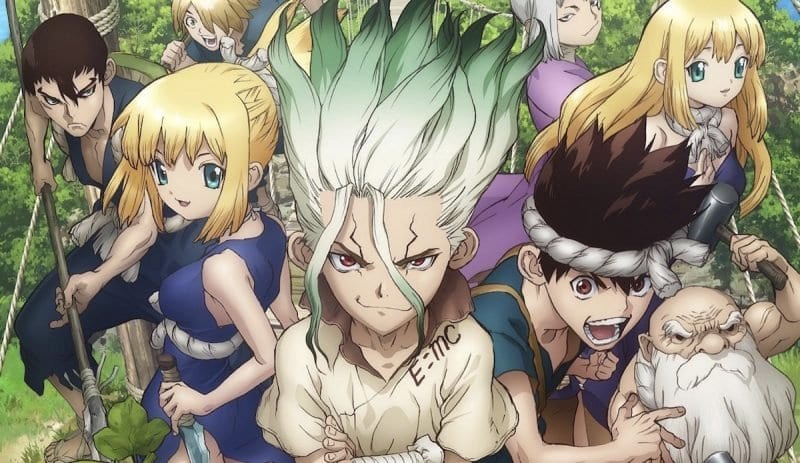 Dr. Stone is an anomaly of a Shonen anime, entertaining viewers with battles of wit instead of fist fights and bombastic techniques. As such, you might not be sure what shows would scratch the same itch, so we’re here with five anime like Dr. Stone, AKA other non-battle battle anime that share Dr. Stone’s creative spirit.

On a secluded farm in the middle of a forest, a group of children spend their days together, playing and enduring a rigorous education by their foster mother Isabella. It’s an idyllic life, until two of the children – Emma and Norman – discover the sinister reason for the farm’s existence.

Before long, they find themselves drawn into a desperate bid for survival. They must engage in mind games with Isabella to hide what they’ve discovered, and enlist the help of other children who may be able to help every child on the farm earn their freedom.

Like Dr. Stone, The Promised Neverland doesn’t hinge on physical conflict to keep viewers entertained. Instead, it presents dilemmas its characters need to mull over and think on, in order to come to the best solution through creativity and carefully laid schemes.

Likewise, it sees its cast of protagonists banding together to survive a grim challenge, making due with what’s available to them in order to overcome a harsh environment lacking necessary tools that could see them out of their predicament more easily.

In the midst of the second World War, a secret program is established to train a group of men in the arts of subterfuge.

Some become masters of disguise and blend into other countries’ populaces; others learn how to engage in mind games with spies from rival nations; and others still learn how to use their exceptional wits to uncover secrets some would rather keep buried.

Once their training is complete, they’re sent all over the world, leaving their stories to be told in bits and pieces as the series progresses.

Though it never becomes as fantastical as Dr. Stone is, Joker Game offers the same types of mind games and contests of wit. Solutions aren’t gained through fist fights, with characters instead devising complex yet understandable plans for overcoming their dilemmas.

It’s also an easy watch. Viewers need only watch 12 episodes to see everything the series has to offer, and they’ll be all the better for the four hour time investment.

When it comes to anime which focus on battles of wit, few do it as masterfully as Kaiji.

In the midst of Japan’s prolonged recession in the 1990s, a young man named Kaiji struggles to find steady employment and longs for a way to get rich quick. His circumstances don’t become any better when a loan shark reveals he’s on the hook for an outstanding loan he signed off on for his co-worker, and that it will take ten years to repay.

However, the Loan Shark offers him a deal: He’ll get Kaiji aboard the Espoir cruise ship for a night of high stakes gambling, where he can earn enough to clear his debt and shore up an exceptional amount of money for himself besides. However, if he doesn’t make it all back, he’ll owe the Shark even more money.

What follows is a tense battle of strategy, tells and risking everything on luck, all for the sake of getting a better life.

To be sure, Kaiji’s mental warfare is much less wholesome than some of Dr. Stone’s scientific discovery-themed plots. Blood is spilled, motivations are sleezy and most of the characters’ ambitions are self-serving.

And yet, like with Dr. Stone, it’s hard not to get sucked into the mental gymnastics and creative thinking every character engages in. Hours can pass in a blink as viewers try to figure out what crazy scheme the characters will engage in next, and they’ll only become more hooked as a new dilemma emerges.

No Game No Life

Amid the wave of Isekai series that have flooded the market in recent years, No Game No Life still stands out as a must watch for anime fans of all stripes.

After defeating the god Tet in a game of chess, legendary gaming siblings Sora and Shiro are wisked away to a world where all disputes are solved through gambling games and competitions. Cheating is allowed so long as it isn’t discovered by the other player, and winning these competitions can grant the victor most anything they desire.

Through this, several kingdoms have been established, using their victories to elevate their status and secure their hold over their corner of the world; and all with Tet’s blessing, no less.

To this end, the siblings align themselves with a kingdom within the world and set out to defeat the rulers of other kingdoms, aiming to gain the attention of Tet and defeat them in another competition in order to return home.

The creative ways the series presents problems, and the equally creative ways it comes up with for overcoming them, falls in line with the sort of thinking and strategizing Dr. Stone is famous for.

Where others would try to smash and crash their way through a dilemma, No Game No Life presents wild solutions like betting on a coin landing on its side or triggering a Hyper Nova by eliminating words that would prevent it.

It’s crazy, fantastical and not something viewers will see on a regular basis, but if that’s what they loved about Dr. Stone, then there’s no better follow-up.

What would happen if a person gained the ability to kill anyone in the world by writing their name in a death god’s notebook?

Such is the premise of Death Note, the smash-hit non-battle battle anime from 2006. After finding the Shinigami Ryuk’s Death Note by chance, Light Yagami decides he’ll use this newfound boon to eliminate every criminal in the world, and rule over this manufactured utopia from the shadows.

As he enacts this plan over the course of several years, however, more and more people rise up to stop him, engaging in games of cat and mouse in order to put a stop to his plans and unmask him as one of the world’s most fiendish murderers.

To say Death Note paved the way for Dr. Stone would be an understatement. It popularized the idea of a non-battle battle anime in ways few other series have ever managed, and its contests between characters attempting to read each other’s moves before they happen provided a framework many series still try to ape today.

It’s readily available on multiple outlets for streaming too, so viewers should have no problem binging its whole 37 episode run at their leisure.