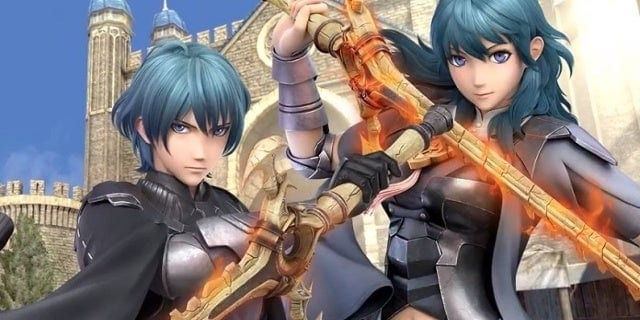 The biggest difference between Byleth and other Fire Emblem characters is their range. Whereas characters like Ike or Roy are focused on close combat Byleth plays at mid-range, and you’ll need to learn the range and output of their attacks to really succeed.

Byleth is a mid-weight character, falling right in between Ike and Marth in terms of speed and launchability. Each of their Smash attacks can be incredibly powerful, with the ability to easily launch mid-damage enemies.

Of particular note, however, are the side Smash and down Smash. Side has Byleth stab the spear Areadbhar forward, and you can actually control the trajectory by tiling the stick slightly as you do it. The attack can be tilted down or up, and the up version can cause around 19 percent damage.

Down smash, meanwhile, sweeps the axe Amyr from front to back. It’s slow to play out, but can cause a whopping 23 percent damage and even break a shield in one blow.

Byleth’s up Smash whips the sword in a circle and can hit multiple times, while the rest of their regular attacks are fairly quick. Now let’s get into Specials, which are entirely themed around the weapons of the house leaders from Three Houses, and they’re what makes Byleth so unique.

Neutral Special – Byleth uses the bow Failnaught to fire an arrow straight ahead. The move can be charged to full power to cause 29 percent damage. The bow will flash when charging is complete, and the charged shot can launch enemies.

While charging you can also change the shot’s direction or cancel out of it with a shield.

Side Special – Byleth sweeps Areadbhar in an arc while charging forward. The move has a sweet spot at the blade of the weapon, which will cause more damage than hitting an enemy with the shaft.

Using the move in the air spins Areadbhar in an arc around Byleth, protecting them from multiple directions. There is a split-second of recovery time after Byleth uses the move, that could open you up to an attack.

Up Special – Byleth whips their sword up diagonally. The sword acts as recovery and can attack to ledges or walls.

If you hit an opponent with the sword, Byleth will pull up to them and then bounce off, with the potential for a Meteor Smash.

Down Special – Byleth charges up Aymr for tremendously powerful attack. There’s a charge time similar to Falcon Punch, but Byleth has super armor during its startup.

Once used Byleth slams the axe down into the ground causing a shockwave, and anyone directly hit by the attack will get a massive 36 percent damage and be sent flying. Byleth can also drop through platforms while using the attack, and the aerial version causes a bit less damage. Of course, if used properly you can also smash a shield in one hit.

Final Smash – Byleth whips the Sword of the Creator in an arc forward. The attack can catch up to three enemies at once, and hits them with a shockwave. The entire attack causes about 45 percent damage in total.

As you might have caught on to already, when playing as Byleth your range and distance will be your biggest strength. You’ll want to take some time to really learn the range of each special attack, as well as the charge-up time.

Because of how readable Byleth’s attacks can be, you’ll want to be as unpredictable as possible. Remember all of the moves and options at your disposal, and don’t get stuck using the same thing.

Be especially careful when you’re going up against a character with a counter, like any of the other Fire Emblem characters.

While you might be tempted to mostly use Amyr and Areadbhar, don’t forget about Failnaught. Its range and quick charge can be absolutely life-saving in some battles, especially when used in conjunction with everything else.

Byleth is surprisingly adept at aerial combat as well, so if you’re going against ground characters take advantage of that.

As a final tip, you should play things safe until enemies get to higher percentages. Byleth can so easily launch opponents that if someone has a high percentage you should go on the offensive. One false move can lead to their doom when you’re playing as Byleth.

We also have guides on how to play all the other DLC characters, like Joker and Terry.