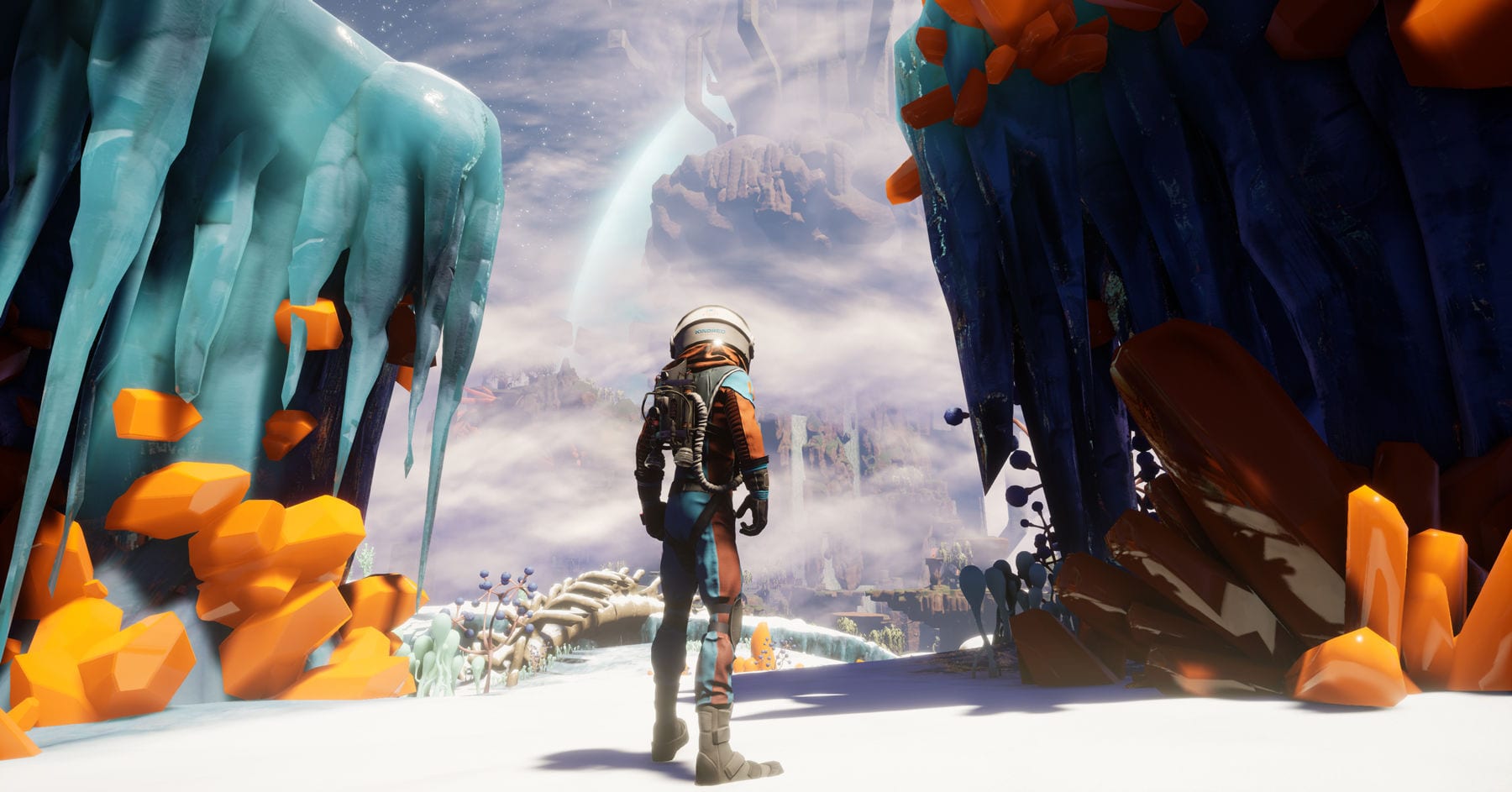 Journey to the Savage Planet on PS4

Journey to the Savage Planet has online co-op functionality. Unfortunately, prior to the review embargo lifting, we were unable to check out the online co-op in action. As such, this review is based purely on a single-player experience.

Before diving into Journey to the Savage Planet, I really didn’t know all that much about it. I’d seen a few trailers, but all of them kept the gameplay fairly basic and merely left you with a sense of intrigue. What could you find on this apparently savage planet? Well, turns out there’s a pretty great Metroidvania-esque game tucked away just waiting to be found.

Journey to the Savage Planet sees you assuming the role of an explorer for Kindred Aerospace, the fourth best interstellar exploration company around. You’ve been sent to an uncharted planet far off in the distance of a fictional universe known as AR Y-26. Deemed to be uninhabited by any form of intelligent life, your job is to catalog all the flora, fauna, and anything of interest that you find on the planet’s surface, so the Kindred scientists can use all that lovely data.

Problem is, you’ll start off this little escapade with very little. Your ship’s AI will make frequent hilarious quips, and that’s about it. Over time as you explore the planet and get busy scanning everything you can possibly see to catalog it, you’ll acquire crafting materials that can be used to unlock upgrades and abilities via the 3D Printer on your ship.

Alas, as you begin to explore AR Y-26, it turns out that things aren’t quite as clear cut as they’d been made out to you at the beginning, and you’ll need to dive deeper into the mysteries of the planet. We won’t delve too deep into the specifics of the narrative here to save you from spoilers, though.

All I will say on the matter is that, much like the entirety of the experience to be had in Journey to the Savage Planet, the story is enhanced the more you venture off the beaten path. It enables you to find more hidden collectibles, which in themselves provide additional context to the story. Crucial context, if you’re going to full understand what’s going on here.

Venturing off the beaten path, as I noted above, is something that Journey to the Savage Planet really wants you to do, and for good reason. There are secrets and surprises hiding around every corner of the world, and simply going off to explore that route seemingly leading to nowhere will often result in you spending a good chunk of time completely distracted from your main objective.

Not every point of interest you see in the distance can be immediately explored, though, and that’s where Journey to the Savage Planet’s Metroidvania elements come into play. Progressing through the game unlocks you additional abilities and tools, which in turn allow you traverse more of the planet. Double, triple, and quadruple jump thrusters, grapple guns, a ground pound ability, rail grinding, it’s all the usual affair for a Metroidvania title, too.

This not only encourages you to retrace your steps throughout the game, whenever you’re given a new side mission or science experiment (more on those later), but it makes exploring the planet and seeking out all those collectibles and scanning all that flora and fauna once you’ve beaten the main story all the more interesting.

Journey to the Savage Planet’s world design only further enhances this. A series of precariously placed islands float hundreds of meters above the surface. Gauntlets of grapple, swing points, and mag rails send you speeding through the air in a frantic panic you’ll forget to push that L1 button at just the right time. Proximity doors snap shut, concealing their treasures as soon as you get close.

Once you’ve got to grips with your various abilities and upgrades, you’ll feel like a sci-fi Spider-Man, casually gliding through the air, grappling from point to point with relative ease. It’s actually this traversal and the free-flowing nature of it all that really makes exploring the world in Journey to the Savage Planet such a joy.

That being said, there were a handful of times where I awkwardly triple jumped my way up the side of a cliff when I don’t know if that was how the developers intended for me to get there. It’s a bit of a problem, as it doesn’t always feel like you should be, but there’s no clear alternative and nothing stopping you from jump spamming your way up that jagged wall. Though not always a problem, it can lead to confusion regarding where you should and shouldn’t be within the world. Though it often doesn’t take long for the game to send you plummeting to your death if you’re in the wrong place.

Each and every time I ventured in an opposite direction from my main objective marker, it was a pure delight. That being said, returning to try and polish off all the collectibles, and grab enough Fuel Sources to refuel your ship (the Javelin) and get home once you’ve finished the main story became a bit cumbersome.

That’s because there’s no mini-map. Well, there’s no map at all in Journey to the Savage Planet. While the likes of Star Wars Jedi: Fallen Order and other Metroidvania games offer 3D maps that make for easy navigation and take the frustration of mindlessly scouring the world for a tiny nook you haven’t yet explored, or a triple jump point you couldn’t make the first time around, Journey to the Savage Planet leaves you with but a compass at the top of your screen to guide you.

It can make finding things like the Fuel Cells required to get home, the 100 Orange Goos that help boost your health and stamina, and the Alien Alloy crafting material that’s very scarce and you need for most upgrades, incredibly tiresome. Put it this way, I went from considering 100%-ing the entirety of Journey to the Savage Planet, to being happy with my 89% cataloged rating, and 80% game completion once I’d found the fifth fuel cell after hours of searching and opted to return home and be done with the game.

While there are Visor upgrades you can craft from the 3D Printer that will reveal the nearby locations of the Orange Goo, Fuel Cells and Alien Alloys I’d not yet claimed, making things easier, it was still fairly difficult trying to figure out how I’d get to one seemingly in the core of a floating island with no obvious way for me to reach it. These Visor upgrades, like many others in Journey to the Savage Planet, are locked behind Science Experiments, though.

Science Experiments are all about making you complete bizarre challenges as you explore. One may require you to catalog a set percentage of AR Y-26’s life forms, while another may task you with killing four creatures with a single Bombegranate, or falling 100 meters and saving yourself with your jump thrusters to avoid taking damage. Another tasks you with getting up-close-and-personal with all the different creatures to get a live sample of them by jabbing them with a giant needle. It’s all very likely to get you killed, basically.

Completing a full set of Science Experiments sees you rank up, which unlocks more upgrades that’ll help you with your job. While some are fun, others feel more tedious, especially when you’re trying to find four of the same enemy in close proximity to kill them all in one fell swoop.

Speaking of enemies, Journey to the Savage Planet does feature combat, but it all feels very basic. It’s something that, sadly, permeates right through to its final boss, which has got to be one of the most underwhelming I’ve experienced in a while. Leading up to the boss fight, you’ll have to find and shoot three glowing spots in a series of very similar areas. These get dull as all hell, and after beating that and coming across a final boss that simply stayed completely still and requires you to just shoot the ton of glowing spots all over its body –it felt like the developers had begun to run out of ideas.

As for the rest of the creatures, common enemies can often be killed by simply shooting them, while others may have the same aforementioned glowing weak points you’ll need to shoot to deal damage. The problem is, the game just reuses these two ideas over and over. It’s either a very simple target, or a slightly trickier, smaller target to hit, especially when the enemy is running about and attacking you. One or two may slightly change this formula by adding armor to the weak points, but it’s not all that difficult to figure out how to break it.

There are a few standout creatures, but I would have rather seen a bit more variation in how these creatures are defeated. Similarly, aiming your weapon in Journey to the Savage Planet certainly feels floaty. It’s something you’ll get used to the more you play it, but it never feels like you can pull off truly accurate shots… which makes trying to hit small glowing weak spots on enemies even more troublesome.

Things like the floaty combat controls and lack of map may detract from Journey to the Savage Planet slightly, but they can’t get in the way of the excellent satirical comedy that the game’s oozing with.

Everything from the comedic delivery of lines by your AI companion, through to the Baboushka, a discoverable alien species that lets out this ear-piercing shriek whenever it sees you in fear that you’re going to under it, right through to the descriptions from your scanner of just about anything you can scan in the game. The whole thing just feels like a really good time. It knows it’s not perfect, but it’ll try and make you laugh so much that you forget about them.

Despite its flaws, Journey to the Savage Planet did keep me interested right from the beginning through to me grabbing that fifth and final fuel cell and returning home (an optional objective once you’ve completed the series of main objectives on the planet).

It ran flawlessly on a PS4 Pro, even when the screen was filled with particles that were the result of several massive explosions happening at once, and the fact that it can keep me hooked for another good few hours simply seeking out collectibles after I’d beaten the main story is a telling sign that its doing something right (I’m not normally one for focusing on collectibles).

Journey to the Savage Planet is well worth checking out if you’re looking for something to fill the void of time you’ve got during this fairly quiet start to 2020. The sense of exploration drives you forward, the satirical comedy lands every time, and the presentation on the whole just adds to the magical sense of exploring and mapping an uncharted planet.

Journey to the Savage Planet