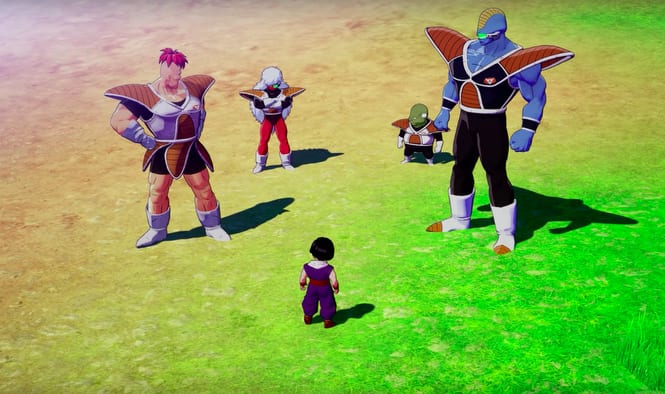 What Reviving the Ginyu Force Does in Dragon Ball Z Kakarot

Like with other boss enemies you can revive in Dragon Ball Z Kakarot, the Ginyu force will appear on the world map after you’ve made your wish and can be taken on as part of a new side mission. In this case, it’ll be titled “Ginyu Force Tryouts,” and has a recommended difficulty level of 34.

Likewise, you’ll only be able to do the mission and fight the Ginyu Force as Gohan. Trying to activate the mission as anyone else will result in the quest not activating.

So long as you fulfill these requirements though, you should be able to find them in the Southwest Mountains Area and take them on whenever you wish.

What Fighting the Ginyu Force Again Does

As for what you get out of fighting the revived Ginyu Force, it again falls in line with what you get from reviving other past boss enemies.

In addition to netting you a large amount of experience for Gohan and any support characters he has with him, beating the Ginyu Force will also net you four Soul Emblems: One for Jeice, Burter, Recoome and Guldo. Each has their own spread of stats, but they’re all well-tailored to the Training Community Board.

That’s all there is to know about What reviving the Ginyu Force does in Dragon Ball Z Kakarot. For more on the game, check out our guide wiki. It has plenty of guides on hot topics like how to get Green Z Orbs fast and how to get a Royal Tomato.