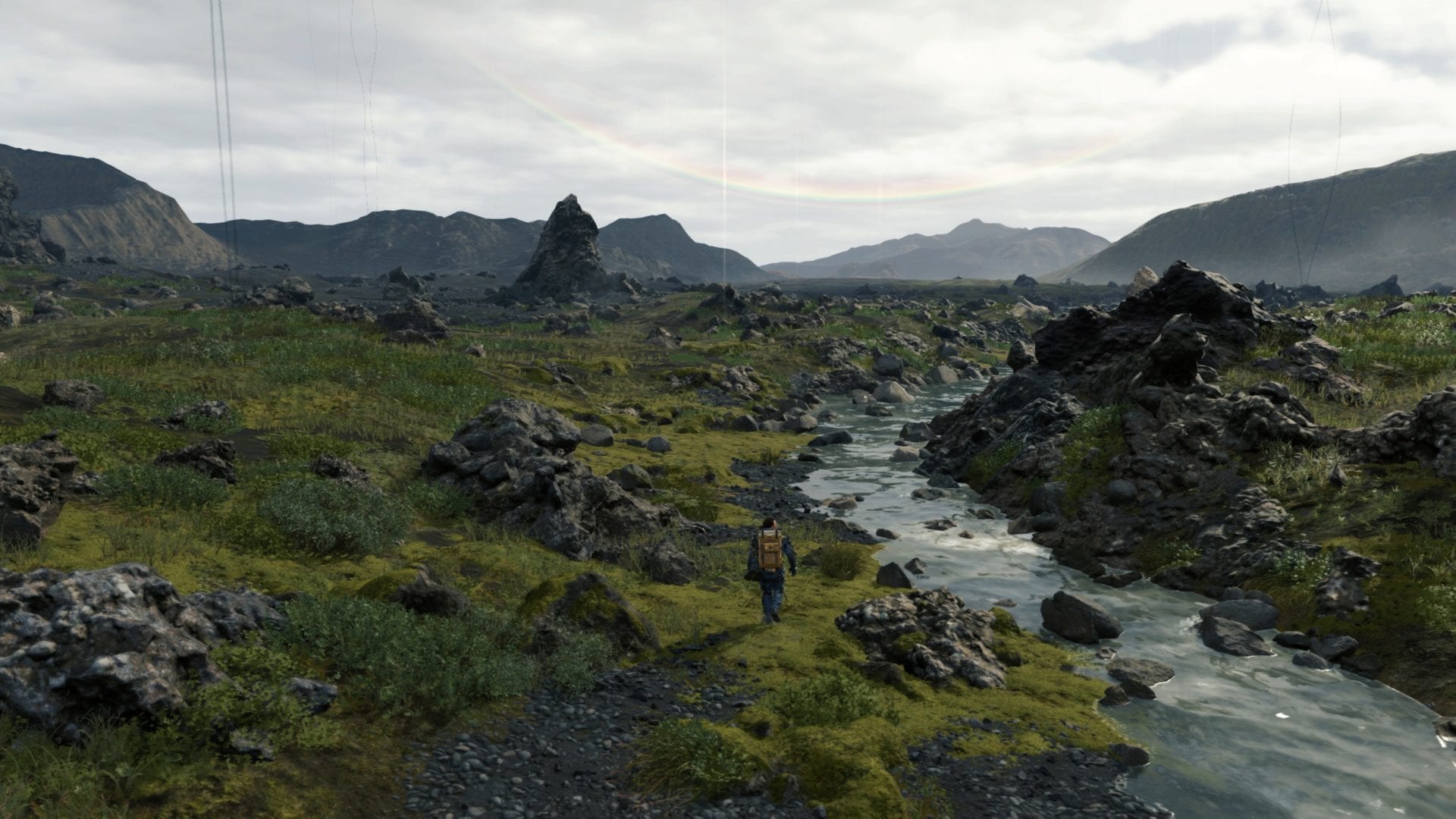 With the release of Death Stranding, a long shadow has been cast over open-world exploration games. Kojima’s much-anticipated sci-fi epic features some of the most in-depth and hardcore traversal mechanics I’ve ever encountered and is going to make other games of this ilk seem simple in comparison.

It’s an odd thing, movement. We take it for granted in games, expecting a certain baseline and immediately crying foul if a title doesn’t meet it. This is sometimes referred to as “game feel,” and it’s something a player can sense intrinsically.

In Death Stranding, you play as Sam “Porter” Bridges, a post-apocalyptic delivery man who delivers supplies and equipment to the last holdouts of humanity, who cower in formidable bunkers and rarely leave.

This act of deliverance is both symbolic and very literal. Kojima is a man that never met a metaphor he didn’t like.

Mechanically speaking, these deliveries make up the vast majority of gameplay, and the simple act of moving objects from point A to point B is iterated on over and over again throughout the course of the game.

Things start simple: A quick job, delivering a few parcels over moderately flat ground, the greatest threat you will face is a stray rock that might get caught underfoot.

By the end of the game, Sam might find himself traversing mountains in whiteout conditions, contending with bandits and horrific undead nightmares… all with a highly volatile nuclear warhead strapped to his back.

The game takes place over several large open-world maps, each of which could be the game world of a lesser title. And while they may seem empty to players familiar with the Ubisoft school of thought, the terrain is incredibly diverse and is where the challenge of the game lies.

The inventory system at play in Death Stranding is a complex thing, as are many of the underlying systems of the game. Put simply, the more you carry, the harder it is to maneuver Sam. Where each item is stored on his suit can have a very real effect on movement, but thankfully there is an automated option that takes away the tedium.

One of the games core mechanics is managing the distribution of weight on Sam’s suit by pulling the corresponding trigger if it leans too far to either side. Pulling both simultaneously will steady Sam and allow him to regain his footing.

It’s something quite unique, at least in my experience, and means you can never become complacent. There is some serious tech at play, constantly analyzing distribution, wind direction, the terrain you are currently crossing and Sam’s stamina levels, all of which can determine when or how often he will stumble.

It’s fairly simple to deal with on level ground, but a different story entirely in difficult terrain, during inclement weather or while facing danger. Actually falling over does a large amount of damage to your parcels and can even cause them to fly loose, and is animated in such a way that you really grit your teeth to see such an awful impact.

The environmental physics at play are seriously impressive, with high winds that physically rip at Sam, capable of pushing him off a ledge if you aren’t careful. This forces you to walk into a headwind at an angle to make any progress, in much the same way a sailboat must tack into the wind.

There is a stamina system that governs all, giving every movement a sense of gravitas. Fording a river becomes a much more imposing prospect when there is a real chance of you collapsing halfway across, and having to watch your precious cargo slowly drift away.

You are rewarded occasionally with better and improved gear, and while you do get some weaponry, I was always more excited to unlock more durable boots than I was to get a better assault rifle.

The game features a variety of exotic gear in order to assist you on your way, from different exoskeletons designed for speed, strength or stability, to a futuristic hover trolley that can be tethered to Sam, to carry additional gear or used as a skateboard as necessary.

Ladders and Climbing Anchors are the game’s bread and butter, allowing Sam to traverse quickly sheer peaks and descend from dangerous cliff edges. Mountaineering gear is invaluable in Death Stranding, and it can save not only your own life but that of other players, too.

The Social Strand system allows players to build structures and gear that can be used by other players in a shared world. With it, you really feel like you are contributing to a new world, and finding a bridge or ladder left by another, just when you need one most, is a feeling unmatched in open-world gaming.

Together you bring to life the landscape, erecting safe houses and highways to aid others in their adventures while enriching your own. This sense of achievement, along with the satisfaction of a job well done, is what elevates Death Stranding to something truly special.

The feeling of taking a job, plotting the most efficient course, and reacting to any curveballs the journey might throw at you is at the very core of Death Stranding… that is, if you put aside the insanity of the main plot, and focus on the gameplay.

Death Stranding serves a line in the sand, drawn between our current generation of games and the untold wonders that await us in the next. It serves as a bridge between the way we navigate our player characters in modern open-world games and offers a fascinating glimpse at what the future might hold.

I imagine developers the world over are paying close attention to the systems and the mechanics of movement in Death Stranding, and hopefully adopting or iterating on them for the future. As it stands, Death Stranding is my new benchmark for open-world games, and it sets a high bar, indeed.