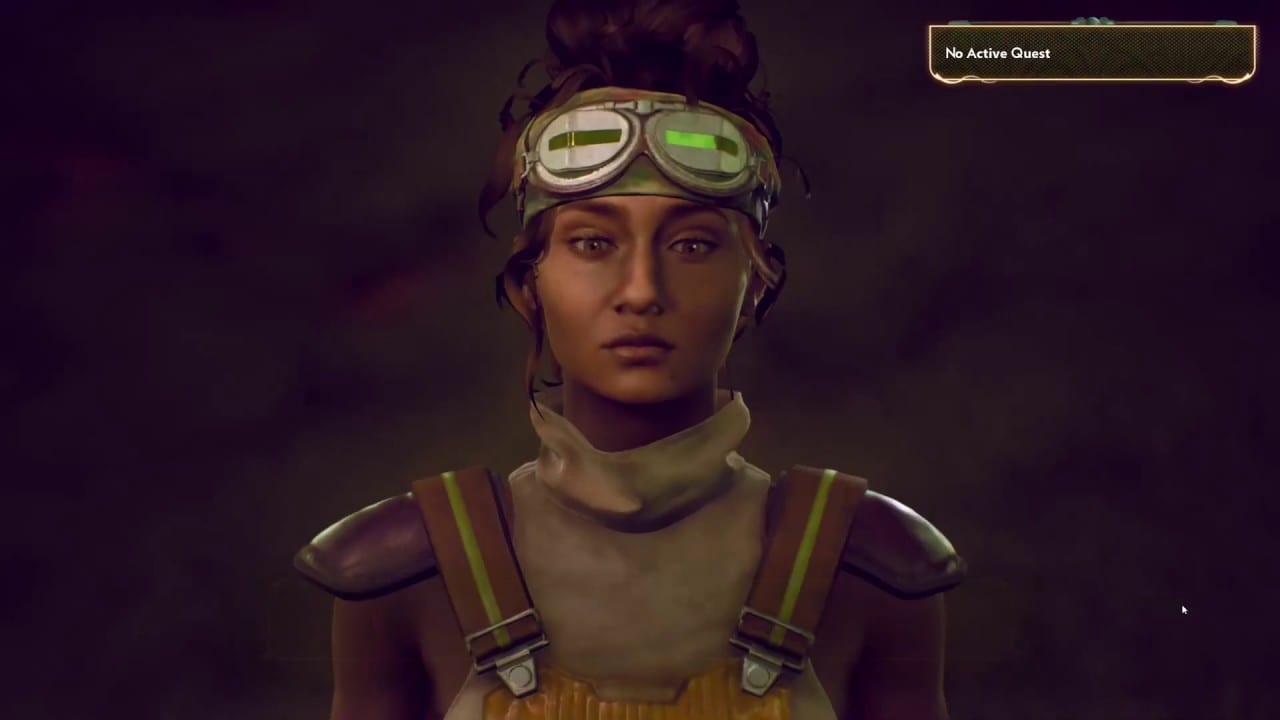 After enlisting Parvati into your crew proper in The Outer Worlds’ early hours, you’ll be asked by her if you can introduce her to Junlei, the Engineer of the Groundbreaker. It’s easy enough to do too, as the main mission will put you on a course for her several times.

Head to the Groundbreaker with Parvati in your party and speak to Junlei. When you do, introduce Parvati to her and exhaust all of her dialogue options. Then, leave the conversation and head back to your ship.

Once you’re back on the Unreliable, look for Parvati and speak to her again. She’ll usually be in the room to the left of the ship’s entrance/exit. You can also use the “Welcome Aboard the Unreliable” plaque as a guide post.

Speak to Parvati, and she’ll tell you that she and Junlei have been messaging each other. Not only that, but Junlei has sent her a message that shows she’s interested in her.

After advancing through the conversation, Parvati will open a new message from Junlei and discover she may still be in love with someone from her past.

Spoiler warning: We’re going to talk about the possible endings to the Drinking Sapphire Wine Quest next.

How to Get the Best Ending to Drinking Sapphire Wine

From here, you can go down one of three different paths for the quest, each with their own ramifications for your playthrough of The Outer Worlds.

Take Parvati to the bar on the Groundbreaker and then order her some wine. She’ll like the taste, and will go on to tell you how she feels about Junlei.

After you’ve done this, Parvati will ask to return to the Unreliable. Do so, and then speak to her to find out that she’s asked Junlei out and had her feelings reciprocated, and that she isn’t hungover from the night before. This will lead to her relationship with you being improved, and will also open up the next companion quest tied to Parvati, named “Don’t Bite the Sun.”

If you’re not too worried about your relationship with Parvati or using your persuasion skills though, you can go for the standard ending to the Drinking Sapphire Wine quest.

Go to the bar as usual, and when Parvati asks what she should drink, recommend Beer. Go through her dialogue options and choose whichever responses you like to get to the bottom of her feelings for Junlei. When she asks to drink more, tell her to order Whiskey or more beer, getting her more drunk.

This will still lead to the same outcome of her asking Junlei out, but won’t improve your relationship with Parvati as much as the best ending. On the plus side though, it can lead to some funnier dialogue options and responses from Parvati.

How to Get the Worst Drinking Sapphire Wine Ending

As for the last path you can choose with the Drinking Sapphire Wine quest, it’s one of the darker endings available to a mission in The Outer Worlds.

If you choose to accompany Parvati to the bar but never go, there’s a chance she’ll go on her own. If this happens, she’ll die, presumably from alcohol poisoning. This will remove her from your party, and block you off from any subsequent companion quests tied to her.

It’s still unclear if this is a glitch, and if it will be patched out at a later date, but if you’re the kind of heartless monster who doesn’t mind leaving a companion to die, you can go for this ending at your leisure.

Hopefully this quest guide on Drinking Sapphire Wine was helpful. For more on The Outer Worlds, check out our guide wiki as well as some guides on hot topics like whether there are romance options and where to get every Rest N Go keycard.