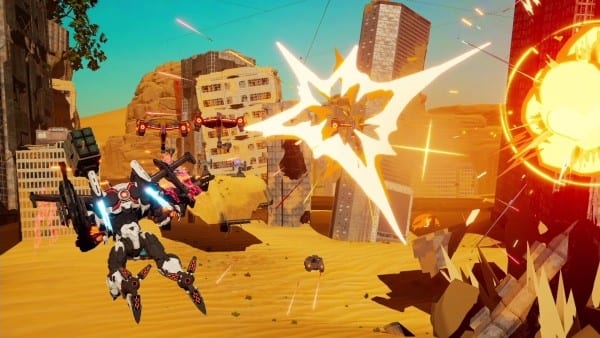 Daemon X Machina lets you build your very own mech, called an Arsenal, that you can customize in a ton of different ways. Whether you go into battle with a machine gun or an arc gun, you’ll need plenty of ammo. So here’s how to reload and get more ammo in Daemon X Machina.

How to Reload and Get More Ammo in Daemon X Machina

You’ll blow through ammo very quickly in Daemon X Machina, no matter the type of weapon you’re using. First off, make sure you totally outfit yourself with weapons in both hands and both pylons, as well as a shoulder weapon.

Nothing is worse than running out of ammo in the middle of a mission.

To reload your guns you’ll simply have to expend the entire clip you’re currently using, as there, unfortunately, isn’t a way to auto-reload. However, reloading is generally pretty fast, so you don’t need to worry.

Now, to get more ammo you’ll need to destroy enemies. Whenever you destroy an enemy they have a chance of dropping two things, Residual Femto or Ammo.

The ammo enemies drop will randomly be for one of your equipped weapons, and to pick it up all you need to do is fly over the golden sparkle.

Keep an eye on your map as well, as any ammo drops will appear on the map as yellow dots, making it easy to track.

One final option is to equip an Auxillary piece of equipment that boosts the overall ammo you take into battle, like the HAW-RM03 Reserve Magazine.

Unfortunately, to get something like this you’ll need to take it off of an Arsenal that you’ve shot down in another mission, so just make sure to check every mech you beat.

That’s everything you need to know about how to reload and get more ammo in Daemon X Machina.