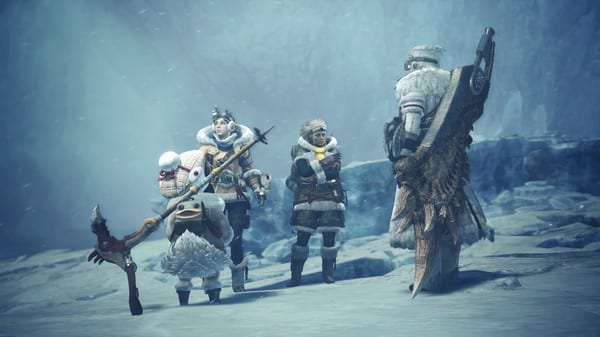 If you’ve rolled the credits and have seen all of the main story quests that Iceborne has to offer, you might be wondering what you can do after beating the game. Well, there’s tons of stuff out there to do for the post-game/endgame for Iceborne.

Getting through the main assigned quests in the Iceborne expansion is hard enough as is but just in case you thought that was everything the story had to offer, well, you would be wrong.

Once you roll the credits and jump back into Iceborne after completing the story, you will now be able to go to the Guiding Lands.

The Guiding Lands is an amalgamation of all of the different locales in Monster Hunter World. So, there’s a desert, forest, coral, and rotten area in this one big location.

And instead of going on assigned quests to hunt down one specific monster in the Guiding Lands, you go there on expeditions and any single monster from the game can show up randomly.

There’s also special mining points and other materials that you cannot get anywhere else.

It’s a fun yet challenging spin to Monster Hunter World that allows you to explore this playground and hunt whatever comes your way.

If you’re attempting to augment your maxed out weapons after beating Iceborne, this is probably the best way to get the rarer materials.

Considering that players will have to complete the main story of the base game before jumping into the master rank quests that Iceborne has to offer, there will be tons of players out there that will need help.

You can expect for a lot of SOS signals to be shot out, with hunters seeking assistance.

After beating Iceborne, there’s actually some incentive to go help out the less-experienced thanks to Pendants, a new feature in the expansion.

Pendants are simply cosmetic items that can be attached to your weapon to give it some flair and to show off to others online, and a lot of these pendants are awarded for answering low rank and high rank SOS flares.

So, if you’re a completionist and down for volunteer work, answering low-level flares will both help you out and the hunter that you’re helping out.

Work on Getting Those Trophies/Achievements

Yup. Iceborne is such a big expansion that Capcom has split up the trophies/achievements as its own separate game. This means that there is indeed a new platinum trophy to get for Iceborne and more achievements to obtain.

You can find the list online but just to name a few, there is a trophy requiring you to reach master rank 200, one for hunting 100 large monsters in master rank quests, and another that has you obtaining 120 different types of room decor to choose from.

These are just a few of the milestones that you have to reach, but if you want to put in hundreds of more hours into MH after beating Iceborne, then getting these achievements/trophies will make that happen.

If you’ve reached the end of the upgrade tree for your master rank weapons in Iceborne, you’ll be able to augment your weapons, choosing specific stats to increase based on the number of slots that it has.

The more slots the weapon has, the more enhancements you make. If you really like a weapons element but the attack power is a bit low, you can boost it up with an attack increase and vice versa.

Most of the materials that you’ll need to augment your weapons will be found in the Guiding Lands after beating Iceborne so get out there and get hunting.

For more tips and tricks for Iceborne, make sure to check out our extensive wiki guide for the game right here.