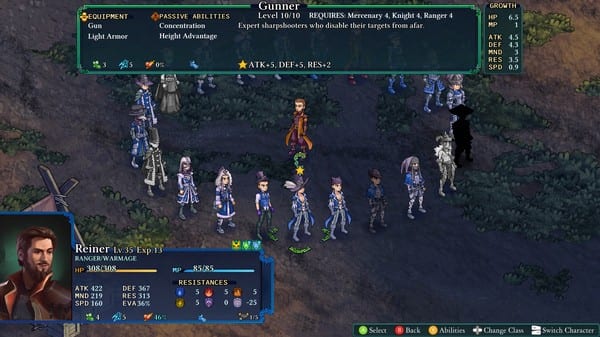 For some reason, Square Enix has left the acclaimed Tactics series of games (whether you want to point at Final Fantasy or Orge Battle, take your pick) untouched for years. The most action Final Fantasy Tactics has gotten in recent years is Ivalice-themed raid that was added to Final Fantasy XIV during the Stormblood expansion.

What makes this extra strange is that it’s not like tactical games are out of style. In fact, we might be in a new golden age of strategy and tactical RPGs.

Think about just the last 12 months or so: Wargroove, Valkyria Chronicles 4, Fire Emblem: Three Houses, Into the Breach; all released to critical acclaim and with their own unique style of play.

If there’s a time to bring back Final Fantasy Tactics proper, it would be now but it seems like at the moment the closest thing we’re going to get from Square Enix is the mobile only War of the Visions.

The key words there though is from Square Enix. No one is stopping other developers from giving fans a modern take on Final Fantasy Tactics-inspired gameplay.

After many years of waiting around for Square Enix to do something, anything, and having to resort to pinning hopes on the disastrous Unsung Story project; developer 6 Eyes Studio are the ones to rescue fans from this dark timeline and deliver a game that Final Fantasy Tactics fans can get excited about.

If you haven’t already then, meet Fell Seal: Arbiter’s Mark. Released in April on Steam, PlayStation 4, and Xbox One and two weeks ago on Switch (which is when it caught my attention), this a game that claims to be “Strongly influenced by games such as Final Fantasy Tactics (original and Advance versions) and Tactics Ogre,” and “a worthy successor of those classics, bringing a slew of improvements and additions to the tactics genre.”

That’s not false advertising. I’ve played most major strategy-RPGs since the release of Final Fantasy Tactics, looking for something new that reminds me of it. While many have been excellent in their own way, none has felt quite like Final Fantasy Tactics. Fell Seal: Arbiter’s Mark is the first.

Fell Seal: Arbiter’s Mark, for lack of a better term, rips a lot of the best and most iconic elements of Final Fantasy Tactics’ gameplay and gives it a modern touch without messing with anything too much.

You start with a small selection of base classes such as Mercenary and Mender, and as you level them up through combat you’ll unlock a new tier of classes. As each character levels up further in a variety of classes, certain combinations will unlock even more unique advanced classes.

If that sounds familiar it’s because it more or less functions exactly the same as unlocking the jobs in Final Fantasy Tactics. Classes that are familiar to classic Final Fantasy jobs like healers, summoners, knights are all there, and on top of that Fell Seal: Arbiter’s Mark adds other unique classes such as the trap focused Peddler, and the card dealing Gambler.

You can also still equip sub-classes to create unique combinations that can either double up strengths shared by similar classes such as magic-focused Wizard/Mender. Or you can have a Knight that moonlights as a Gambler, keeping a few literal cards in their sleeve to buff, debuff, and heal if the situation calls for it.

While you gain EXP the same way through combat as you did in Final Fantasy Tactics, in Fell Seal: Arbiter’s Mark points to spend on new abilities are earned for the entire party at the end of battle, and half that amount is given to any characters you have on the bench to keep them caught up somewhat; an example of a modern touchup gone right for sure.

Traversing Fell Seal: Arbiter’s Mark’s world map, again, works almost exactly the same except that random battles are removed and replaced with a system where you can optionally return to former battlegrounds to engage in “patrols” where you can grind up if you want/need to.

Unsurprisingly to anyone that has carefully been reading so far, attacking and moving will also be extremely familiar to Tactics fans. You move around a grid with classes that have different strengths/weaknesses in how they approach combat and are able to get around.

Approaching someone from the flank or their rear is preferable to going at someone from the front, and different types of weapons and spells will give you more or less reach & power while attacking depending on what you’re using.

Sounds great right? And it is! The combat in Fell Seal: Arbiter’s Mark is exactly what you would imagine a modern Final Fantasy Tactics would play like.

The only major differences being the removal of Charge Time (everything is cast instantly) and the ability to always attack through a crowd. For example, you won’t accidentally hit someone standing in front of you with an arrow if you’re aiming at something further along.

Also, perma-death is not present and instead of dying, slain characters are injured and receive a stat reduction until they get time off from battle per time they were downed.

Before you go running to your shop of choice though, keep in mind a few key things that definitely will feel a bit off in Fell Seal: Arbiter’s mark

The art and music is certainly acceptable and fine, but it’s not it’s nothing that’s going to be remembered as iconic. Nor does the story contain the same level of hyper dense, complex political drama featured in Final Fantasy Tactics.

The tale of Fell Seal: Arbiter’s mark is interesting and is a fine companion to the excellent gameplay, but it’s not going to win any awards for best story this year.

It’s kind of an unfair comparison though. Final Fantasy Tactics had a 1927 Yankees-esque “Murderer’s Row” of developers such as artist Akihiko Yoshida, composer Hitoshi Sakimoto, and of course director Yasumi Matsuno.

The only way you’re going to have a product that matches the quality 1:1 of what that team provided is by bringing that team back together again on a new game.