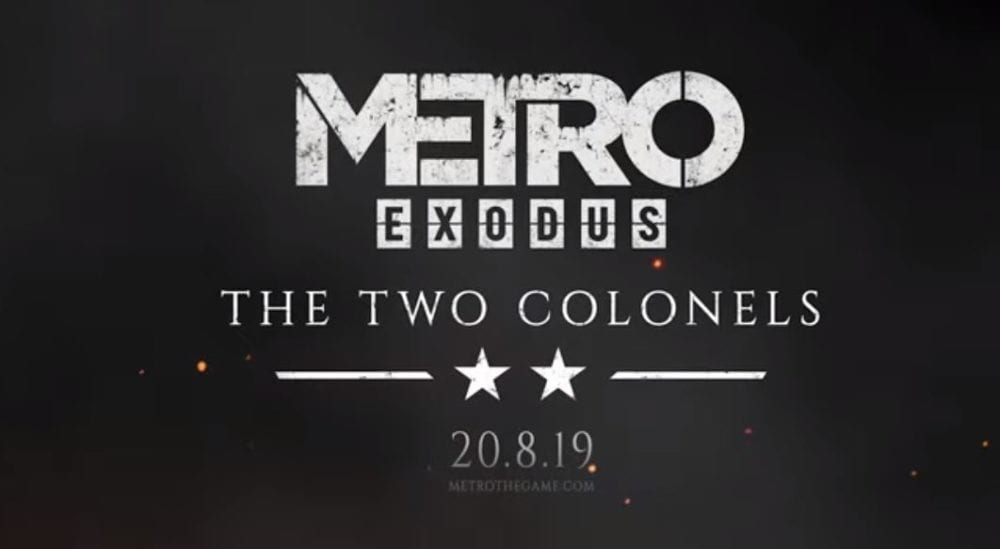 Announced at the Xbox Gamescom 2019 Presentation, Metro Exodus will be receiving its first expansion DLC entitled, The Two Colonels.

The DLC will launch worldwide tomorrow for all owners of the Season Pass and will also be available as a standalone for owners of just the base Metro Exodus game.

The Season Pass is currently $24.99 on Steam and consoles, it promises to add not only this story expansion with The Two Colonels, but another story expansion as well at a later date.

In the gameplay trailer below, we see some of the new enemies and weapons that fans of the game can expect to use and fight against when the DLC launches for everyone tomorrow.

One of the new additions includes a giant flamethrower that players can use to melt away their foes as they traverse the cramped areas deep in the heart of Moscow.

The trailer below also dives deeper into the story that looks to add more lore and history to the evergrowing world of the Metro franchise. There may be story spoilers for the base Metro Exodus game ahead, so be warned.

The story in Metro Exodus The Two Colonels looks to follow Colonel Khlebnikov in the city of Novosibirsk as he fights off swarms of mutants in an attempt to get back to his son before New Year’s Eve.

Metro Exodus launched earlier this year to great reviews, adding yet another notch to the long history of fantastic Metro games up to this point.

Known for its claustrophobic areas and action-packed combat, Metro Exodus The Two Colonels looks to continue that theme by putting the player in precarious situations, equipped with a new arsenal of weapons to help them along the way.

For those who have not yet played Metro Exodus, you can check out the game using Xbox Game Pass, as it was recently added to the constantly evolving list earlier this year. However, keep in mind that DLC like The Two Colonels is typically not included for free with Game Pass games.

Be sure to check out the brand new Metro Exodus DLC, The Two Colonels, when it launches worldwide tomorrow!