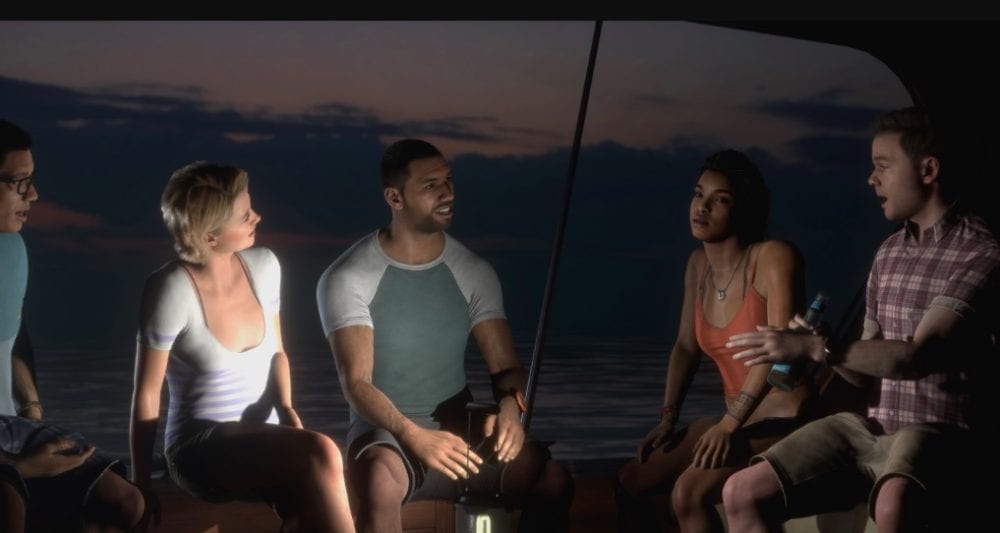 Man of Medan Review on PlayStation 4

After hearing that the developers of Until Dawn, Supermassive Games, would be working on an anthology series based on various tropes in the horror genre, you could say that I was pretty excited.

As a fan of narrative-driven adventures, horror, and Until Dawn’s cliched and campy movie-like presentation, I was hoping for the first entry in this new anthology series, Man of Medan, to be quite good.

But after spending about 20 hours with Man of Medan, it turns out that it, unfortunately, doesn’t come close to the plot-twist-filled story that Supermassive has done before.

The story of Man of Medan revolves around a group of young 20-somethings that hire a boat driver in the South Pacific, to accompany them on a holiday diving trip to uncover a wreck from WWII.

Of course, these five friends run into trouble when a group of strange and very dangerous fisherman comes on board to their little boat called the Duke of Medan and end up kidnapping them and taking them to a so-called haunted ship in the middle of the ocean called the Ourang Medan.

They essentially just want their help to find some gold that’s rumored to be on board this gigantic and maze-like structure, and the rest of the plot is pretty much a huge spoiler, but just know that they all begin to realize that there’s a bigger mystery here on board the ship that they didn’t see coming.

Since this is a narrative-driven and cinematic horror experience, you can expect tons of dialogue options, a couple of different endings, and plenty of deaths.

Man of Medan is short, but priced at $30. You can finish the story in about six hours or so, making it easy for players to jump back in and replay the story to see different outcomes and attempt to save all of the characters, or to just kill them all –it’s really all up to you.

But since the game is so short, you don’t really get to go too deep into these characters personalities, making them all kind of feel one-dimensional in a way that’s not interesting or fun.

Supermassive attempts to create characters that aren’t cliched like the ones in Until Dawn for example, but because of that, Man of Medan loses that charm that I very much enjoyed in Until Dawn.

These felt like real people, but they were all very boring to interact with and couple that with the shoddy voice work and so-so facial capture, spending over 20 hours with them was just very boring and I longed for them to have some character beats or something to make the multiple playthroughs worthwhile –but that never happened.

While the characters weren’t that interesting, the different paths the story could go down were. I enjoyed going back and getting all of the different endings to see what would happen.

What if I killed this person off in the beginning? What would happen if I didn’t call for help using the radio? And what if I broke the distributor cap for the escape boat? When I wasn’t playing the game, I was actually always thinking about little things that I could change and would imagine what the end results would be.

Two endings in particular shocked me and genuinely had me open my mouth and gasp because I couldn’t believe what had just happened.

There are some pretty interesting twists that can occur if you trigger the right actions and make certain dialogue choices, which would be easier to do if the game didn’t glitch out and drop frames literally of the time.

Typically, if a game drops a couple of frames here and there, I wouldn’t make a big fuss out of it, but boy does Man of Medan have a lot of technical issues, issues that can literally make you die without it being your fault.

There are tons of QTE prompts in the game which works like half of the time, and there are moments when you have to time button presses to a heartbeat monitor of sorts, which often doesn’t work correctly.

The game freezes up, resulting in my failure of the prompts; the frame rate would drop so low sometimes that the game wouldn’t register my button presses, and it just ruins some of the best moments in the game. My game also crashed about three times as well, which isn’t fun for anyone.

Also, controlling the characters is difficult as they tend to walk very slow with animations that are very stiff.

I found myself pushing down so hard on the control stick to get them to move as fast as possible, but I was always annoyed with how they moved and interacted with objects in the environment.

I’m not sure why it feels like the game wasn’t optimized for my PlayStation 4, but it was really bad. Until Dawn didn’t have issues like this, so I just wondered the entire time why the game wasn’t running well.

It could be because this is one of Supermassive’s first multi-platform release or it could just be a lack of polish or whatever, but these issues were very annoying and messed up a few of my runs.

Technical issues aside, I actually did enjoy my time checking out the different endings and discovering the mysteries behind Man of Medan and all of that. The story will keep you interested for at least one playthrough and the implementation of the new multiplayer modes are neat additions.

This is a decent start to The Dark Pictures Anthology, but at the end of the day, I really do feel that Supermassive could have done just a bit of a better job at polishing up the issues and tying up the plot a little more.

If you like other choose-your-own-adventure games like Until Dawn, Life is Strange, and Detroit: Become Human, there’s definitely fun to be had here, but it is a flawed experience compared to other recent efforts.

Should You Buy Man of Medan?

You should buy this game if you’re a fan of Supermassive and what they’ve done in the past. If you’re a newcomer to this type of game, I recommend checking out Until Dawn or even a Quantic Dream title instead.

Man of Medan will release on PlayStation 4, Xbox One and PC on Friday, Aug. 30.

Man of Medan is developed by Supermassive Games, the same team who worked on Until Dawn, Hidden Agenda, and The Inpatient.