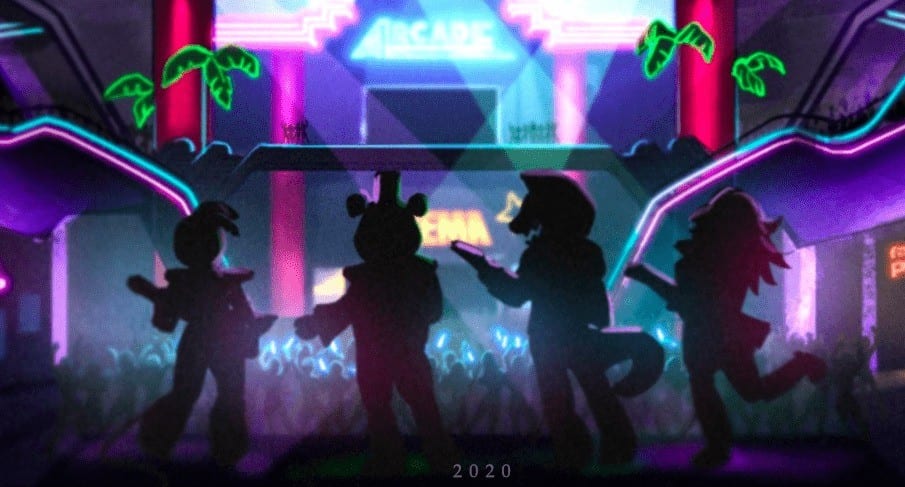 Scott Cawthon, the creator of the smash hit indie horror game Five Nights at Freddy’s, looks to have something new in the works based on his official website.

As of Aug. 8, Cawthon’s official website scottgames.com leads to a cryptic teaser image of an as of yet unannounced title.

In the image, four figures can be seen standing on a stage in front of a crowd in what appears to be a mall.  A Lazer Tag facility and a Fazbear Pizza location can be seen on the left and right side of the figures respectively.

The silhouettes of the four figures likewise have a striking resemblance to the Five Nights At Freddy’s series’ trademark animatronic creatures.

In particular, the figure on the far left shares Chika’s feathered head, while the figure second from the left is a dead-ringer for the titular Freddie Fazbear.

Needless to say, the teaser makes several references to Cawthon’s trademark series, though there has yet to be any confirmation that the teaser is tied to a new mainline entry in the Five Nights At Freddy’s franchise.

However, the teaser image does have the year 2020 emblazoned on the bottom of it, giving fans a window of time that they can look forward to seeing the new project in.

Starting in 2014 with the release of the first entry in the series, Five Nights at Freddy’s enjoyed a meteoric rise in popularity following its release.

It currently stands as one of the most popular indie horror series around, and has spawned a highly-committed fan base thanks to its depth of lore and cryptic storytelling approach.