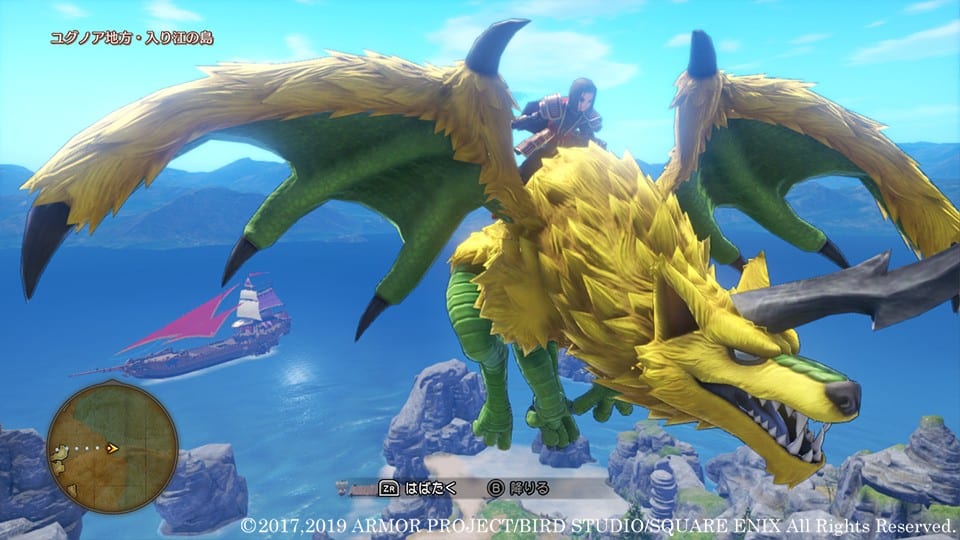 Once again, the images focus on content and features coming exclusively for the Nintendo Switch version, starting with the fact that companion characters will follow the hero around on the field, allowing you to talk to them.

We get to see the ability to slot equipment that changes only your characters’ appearance, so that you can have both cool (or hilarious) looks and the best armor. Gear that changes a character’s appearance will be easily identifiable even when shopping, as it has a pink icon.

The new monster mounts have also been detailed. The Great Sabrecat will have a howl ability that can gather monsters around you so that you can more easily charge them and knock them off (while gaining experience in the process).

The Slime Knight can attack with its sword, while the Glacial Golem can also break down obstacles (and enemies). Again, experience can be gained by killing monsters this way with both mounts.

The Iron Maiden makes you invisible to enemies if you want to avoid combat, while the Labradrake can knock off even large monsters, once more, earning experience in the process.

You can check out all the screenshots below. If you’d like to see more, you can also watch the latest footage, a trailer showcased during Square Enix’s E3 presentation, and quite a lot of gameplay showing the features exclusive to Nintendo Switch, and the latest batch of screenshots showing the stories dedicated to the other members of the party.