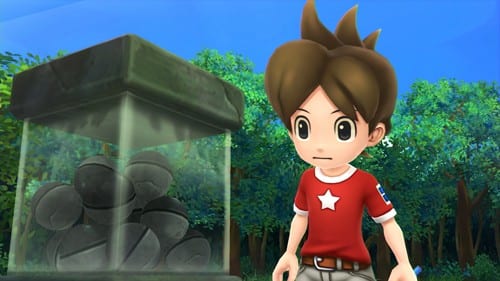 Today Level-5 announced the return of one of its classic games on Nintendo Switch, the original Yo-Kai Watch.

It’ll be titled simply Yo-Kai Watch 1 for Nintendo Switch, and it will release in Japan on October 10, 2019.

It’s an HD remaster of the first Yo-Kai Watch game that was released in Japan for Nintendo 3DS in 2013, and it’ll let new fans enjoy the beginning the story.

As a bonus, the game will come with a code that will unlock boss Chairman McKraken in Yo-Kai Watch 4, which was recently released by Level-5.

The price will be 4,980 yen for both the digital download and the physical versions of Yo-Kai Watch 1 for Nintendo Switch.

Below you can check out the first screenshots, the box art, and an official description of the original 3DS game in case you’re not familiar with it. Do keep in mind that a western release has not been confirmed yet.

“The YO-KAI WATCH game is about hundreds of sometimes cute, sometimes spooky, and usually mischievous Yo-kai that inhabit our world. Yo-kai are not ghosts, monsters or creatures. Yo-kai are, quite simply, Yo-kai. They cannot be seen by the human eye, but they are everywhere. Whether born from the soul of a deceased human, or an everyday object discovering its higher purpose, their personalities are distinctly humanlike.

As you explore the world, use your Yo-kai Watch to find them, befriend them, and turn them into a team to battle other Yo-kai. Befriending new Yo-kai may not be so easy, though – in many cases, you will need to battle with them and impress them during your battle. Each Yo-kai has its own unique skills and strengths and you’ll use them to challenge the evil Yo-kai and help people in need of solving daily problems – like an argument with a friend or forgetting something important – which may be caused by mischievous Yo-kai hidden everywhere.”