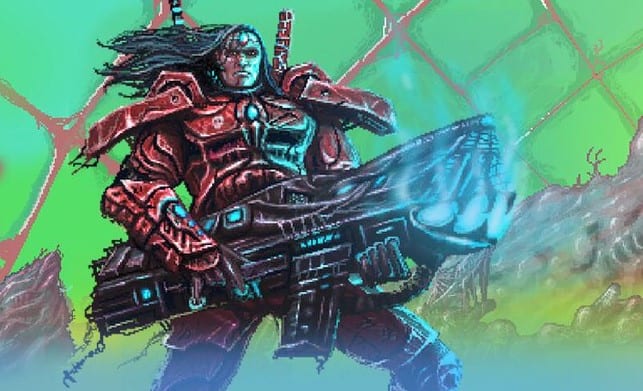 Set in a far corner of space, this heavy metal infused 2D action platformer will bring intense gameplay that will fuse both gunplay with massive guns and melee combat. Fans of classic arcade titles such as the Contra and Metal Slug series will most likely find Valfaris to be up their alley.

Valfaris is being developed by Unity Awards Finalist, Andrew Gilmour who had previously made and created Slain: Back from Hell; another metal-inspired action adventure game with a deep combat system.

In the trailer, a unique and colorful yet gritty art style is present. Early on we get a glimpse of the protagonist for the game, who is a long-haired metal band looking character who kind of resembles Nathan Explosion from Metalocalypse. He then proceeds to shoot and slash everything in his way from various mutated bugs to giant worms and other grotesque beasts.

It seems that the game will focus a lot on aspects of platforming coupled with high speed, parallax-scrolling action.

The game is set to release on PC (via Steam), PlayStation 4, Xbox One, and Nintendo Switch.

Currently, the game does not have a release date though players can sign up for the beta and also check out screenshots and other details about the game on their official page.

If you happened to miss the trailer shown during the PC Gamer E3 conference, you may check it out below: