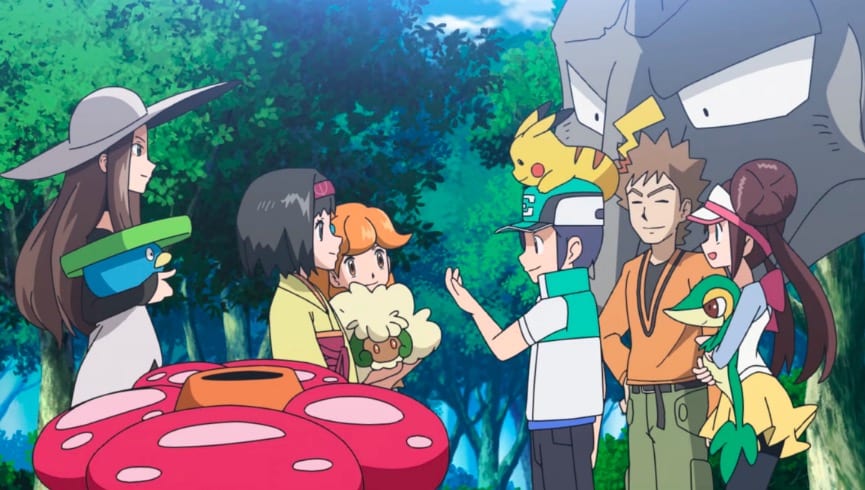 Earlier this morning, the Pokemon Company presented a 10-minute livestream revealing new details on DeNA’s upcoming battle-focused Pokemon game, Pokemon Masters. Surprisingly enough, half of the reveal was essentially a flashy anime trailer that showcased dozens of trainers and gym leaders from throughout the video game series and anime.

This five-minute trailer showed off some pretty cool battle sequences and characters that we’ve never seen before, giving off a more mature vibe than what’s presented in your typical episode of Pokemon.

Even after 1000 episodes, the Pokemon anime just hasn’t changed much (just like the games themselves). With every new region, Ash dumps all of his Pokemon off at the PC and decides to stick with Pikachu and start fresh. He meets his new companions, which are typically gym leaders or something, and heads off to get his eight badges and go on to challenge the Elite Four.

Every episode has the gang solving petty issues or helping out some random person and the show ends with them walking away during a sunset and heading off to the next town or city –the beats are always the same.

I used to keep it locked every week and catch up on the newest episode of Pokemon back in the day, but after the fourth generation or so, I stopped watching just because of pure boredom.

The only reason I would tune in for the anime would be the one-off anime specials that were short-lived but always ended up being more impressive than the mainline show.

Series like Pokemon Chronicles, Pokemon Origins, and Pokemon Generations, tackled topics and characters that don’t get too much love in the mainline series and their art style and animations were always top-notch and felt more mature.

After watching that amazing anime intro for Pokemon Masters, I think we should totally get another short-lived anime series that focuses on a wide range of gym leaders and iconic characters. Seeing Misty team up with Cynthia and Erika would be so badass to see.

Since the game is bringing together gym leaders and champions from across all the regions into one special island, how cool would it be to see all of these powerful trainers come together to compete in a huge tournament?

It might only be a couple of episodes long that go straight to YouTube or something but I would be so down to see a Pokemon anime that doesn’t star Mr. Ketchum and Pikachu.

As much as I love that duo, seeing something fresh and exiting would no doubt draw in Pokemon fans of the past and people who just fell out of the long-running anime.

Even just a promotional mini-series like the Mystery Dungeon anime episodes would make me happy, I just want to see these marvelous gym leaders take on each other in a fight to the death… I mean, a fight to the faint.

And guess what? I’m not the only person who wants a Pokemon Masters anime:

The animation for the Pokémon masters trailer is anime worthy 👌👌👌

As much as I enjoy the Sun and Moon anime, there was a part of me that I forgot about that was itching for a more serious-looking style again. This trailer made up for it.https://t.co/xTGXdTru6q

If you have yet to see the rather long anime trailer to Pokemon Masters, you can take a look down below as well as the latest news story on the title: