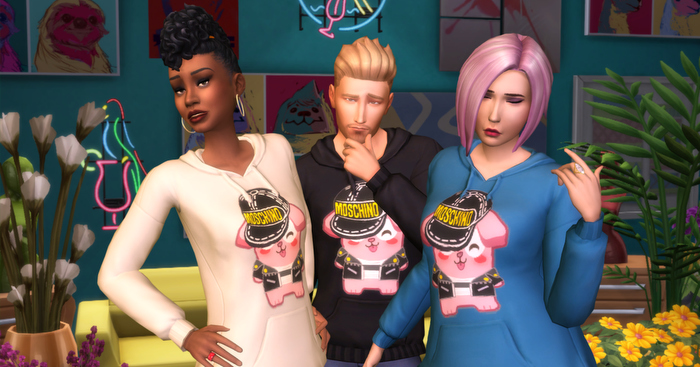 The promotional crossover between Moschino and The Sims marches on with EA revealing a new Stuff Pack for The Sims 4 dedicated to the partnership will be released later this year.

Revealed during the EA Play 2019 stream held on June 8, the stuff pack will offer players the chance to dress their Sims in clothing tied to the Moschino brand, in addition to the hoodie already made available earlier in the year.

The pack includes a wide array of clothing options that can be mixed and matched as players see fit, decking their characters out in all of the latest trends or creating some new ones all their own.

Likewise, the pack will provide a new career path to players. Sims can now go down the path of becoming a part-time Fashion Photographer, making a living by documenting all of the latest looks and trend-setters within the world of The Sims.

All of this and more will be available when the Moschino stuff pack launches later this summer. Those interested can view the reveal via the archived stream below.

The announcement was only one of many announcements tied to The Sims 4, which closed out the livestream dedicated to new news and announcements regarding all of EA’s current and upcoming titles.

In addition to a new expansion titled Island Living, which offers a new locale and activities to take part in, a new game pack titled Realms of Magic was also teased.

All of the available info on these announcements, as well as any trailers and info provided for all of the other titles EA covered during the stream, can be found at Twinfinite.net as they become available.