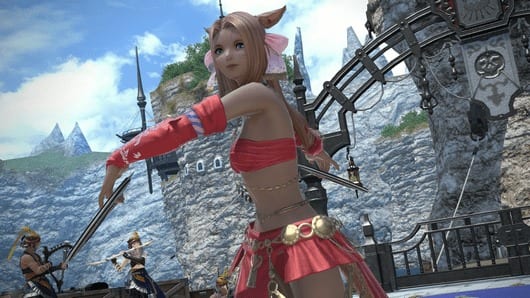 FFXIV Shadowbringers is here and with it, of course, comes new jobs that players can take on and level up either as new mains or just for fun. One of the new jobs is the ranged physical DPS, Dancer, and if you’re here, you’re probably wondering how to unlock Dancer in FFXIV Shadowbringers, find the starting quest, and in get some beginner tips to get started. Here’s everything you need to know.

Starting the Quest to Unlock Dancer in FFXIV Shadowbringers

To unlock the Dancer job in FFXIV Shadowbringers, you’ll first need to head on over to Limsa Lominsa. Perhaps surprisingly to some, neither of the new jobs are picked up while exploring the First, although they will still play an important role in the story should you choose to take on Dancer as your new main when you first run through Shadowbringers.

Anyway, port on over to Limsa Lominsa and then go to Lower Decks (you spawn there) coordinates X 9.8, Y 12. You’re looking for a NPC by the name of Eager Lominsan. They are probably eager to get you going on the quest line for Dancer in FFXIV Shadowbringers, so don’t dilly dally, go on and speak to ’em.

Once you speak the Eager Lominsan and start the quest, Shall We Dance, the quest markers should adequately hold your hand through the rest of the quest to fully unlock Dancer and get your Soul Stone.

After you have unlocked Dancer in FFXIV Shadowbringers, you’ll want to actually start playing it (obviously) so let’s run through some beginner tips and tricks.

The first thing you need to know about Dancer in Final Fantasy XIV is that despite it being a DPS class, it plays quite differently from the other DPS classes in the game.

While FFXIV lacks a traditional support role, Dancer is kind of a support/DPS hybrid in the sense that it sacrifices its own personal DPS in order to boost the parse and damage of other players in the party.

So if you’re obsessed with hitting the highest possible DPS numbers and bragging to your friends about your crazy deeps, maybe pick another job.

However, if you want to play a fun, unique, synergistic job that has more to think about then just squeezing as much personal DPS in as you can, then Dancer might be for you.

Dancer plays similarly to Red Mage if you’re familiar with that job in the sense that there’s a lot of proc management. You’ll have combos to run through, but very often there will be another temporary ability will appear (called a proc), that you can select instead. So consider whether or not this style of gameplay is for you before diving into playing and unlocking Dancer in FFXIV Shadowbringers.

The first thing you want to make sure you do though is that you have dance buffs up on your chosen dance partner. This is done via the Closed Position ability. Note, this ability might not be available when playing at levels lower than 60, the starting level for Dancer in FFXIV Shadowbringers.

You’ll start you dance by selecting either Standard or Technical Step, and then pressing the steps that show up on your hotbar which will be outlined and will replace some of your actions.

FFXIV’s Dancer’s Standard Step will only require two steps, but will be available whenever you want, while the Technical requires four, but is on a longer cooldown. Once the steps are entered, use the appropriate finishing move and to deal damage, and apply the buffs.

As you may have assumed, FFXIV’s Dancer’s  Technical Finish is more powerful and applies party-wide buffs instead of just your dancer partner. Make sure to always use that when you have it available to you unless you’re saving it for something (which is probably rare if ever, just the Shadowbringers raid scenarios if that even).

When you’re not applying buffs, you should be working through your combos depending on the situation (single target or AoE). For example, Cascade and then Fountain is your basic combo. However, as Flourish abilities proc, you’ll want to use those when you can.

For example, Cascade can turn into Reverse Cascade, which is stronger. The same idea applies for your AoE combo, Windmill into Bladeshower.

When you use these Flourishes, you get a chance of getting Fourfold Feathers which can be consumed to use a Fan Dance, an off-GCD ability that can add to your DPS (there’s a single-target and AoE version) and it too can be flourished into stronger versions.

As you can see, playing as Dancer is mostly about staying on top of dances, working through combos and using the proc’d abilities when they appear.

These are just basic tips to give you an idea of how you’re supposed to be playing. Once we’ve had more time with Dancer in FFXIV Shadowbringers, such as a complete effective rotation, we’ll update that this guide with that info.

That’s all you need to know for how to unlock Dancer in FFXIV Shadowbringers and how to play as Dancer at a basic level. Best of luck getting your steps right.