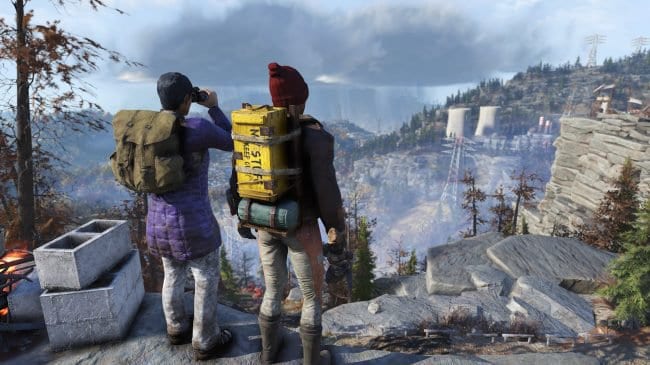 Fallout 76 is going to put your survival skills to the test as you wander around the wasteland of Appalachia. Creatures and ghouls will attack you on-sight, you’ll need to craft a CAMP to carve out your own home away from Vault 76, and you’ll need to maintain your weapons and armor. Sometimes, they’ll need repairing. Here’s how to repair weapons and armor in Fallout 76.

There are a couple of different ways you can repair weapons in Fallout 76, but for both of them, you’re going to need access to a weapons workbench. These are scattered around the map, normally by a discoverable location, but you can also craft one yourself as part of the CAMP system in the game.

Similarly, other players may have a workbench at their own CAMP that you can always use if you wander across it. In the image below, we’ve shown you what a weapons workbench looks like in Fallout 76 so you know what to keep an eye out for when trying to repair weapons.

Once you’ve found one, walk on over to it and you should be shown the three different options above. You want to press Triangle or Y to select the ‘Modify/ Repair’ option. Selecting this will then bring up a list of all your weapons in your inventory. Scroll through until you find the one that you’re looking to repair.

Remember, you can always check the Condition of weapons by looking at the ‘CND’ bar. The lower the yellow segment of the bar is, the worse condition the weapon is in and the more in need it is of being repaired.

Once you’ve selected your weapon, you’ll then have two different methods of repairing it in Fallout 76.

To repair weapons in Fallout 76, you’ll want to press Square or X once you’ve selected it. This will then bring up a list of parts you’ll need to repair it. As long as you’ve got enough, which can be seen on the right side, press X or A and the repair will be completed, filling up the Condition bar back to the top.

Alternatively, players can now use Repair Kits, which can be purchased with Atoms from the Atom Shop. These are essentially a microtransaction, though you can earn Atoms by completing challenges in Fallout 76. To use Repair Kits, to repair weapons in Fallout 76, simply press Triangle or Y once you’ve selected your weapon. Confirm the kit you want to use and you’re all set.

To repair armor in Fallout 76, you’re pretty much following the same steps as outlined above. However, you’ll need to head to an armor workbench, rather than a weapons workbench, as repairs for each different type of gear are specific to the specific workbenches.

It’s also worth noting that all armor and weapons may have different materials in order to repair them. As such, it’s always best scavenging as many junk items as you can while walking around Appalachia in Fallout 76, and scrapping them as soon as you find another workbench to lighten the load.

That’s pretty much everything you need to know about repairing weapons and armor in Fallout 76. For more tips, tricks, and guides for your adventures across Appalachia, be sure to check out our Fallout 76 guide wiki.