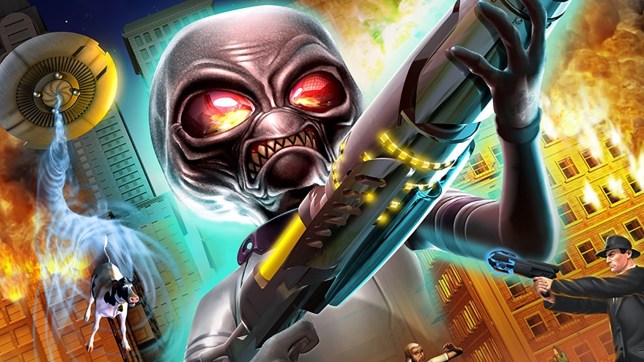 Earlier today, the trailer for a Destroy All Humans! remake landed on YouTube (courtesy of IGN), which marks yet another game we can check off the list of rumored titles that are in development. The game will be developed by Black Forest Games, the studio behind games such as Giana Sisters: Twisted Dreams and Fade to Silence.

The trailer doesn’t reveal much. Little more than a teaser, the video features the main “hero” of the franchise, Cryptosporidium (Crypto for short), doing what he does best: abducting cows, scrambling human minds, vaporizing whatever he wants, and loving every second of it.

If you never played the Destroy All Humans! games, they were open-world sandbox games that let players wield a vast array of alien weapons and powers as they collected DNA, abducted cows, and probed, well, you know what aliens probe. The games were very tongue in cheek and celebrated (and parodied) our fascination with little green men.

While we will have to wait patiently for the remake since it won’t release until 2020, it will launch on the PlayStation 4, Xbox One , and the PC. No word on a Switch version, though, so fingers crossed.

Destroy All Humans! is the second remake to be teased by THQ Nordic in preparation for E3, the first being the classic SpongeBob SquarePants: Battle for Bikini Bottom. With any luck, the company will also remake the rest of the Destroy All Humans! franchise and possibly produce some new entries as well. Here’s hoping J. Grant Albrecht and Richard Steven Horvitz return to voice Crypto and Crypto’s boss, Orthopox, respectively.

For more news on the Destroy All Humans! remake, stick with Twinfinite.